If you are looking for information to go from Paris to Mont Saint Michel, you are in the right place. Here is my guide. For centuries, Mont Saint Michel it has attracted pilgrims, art and nature lovers from all parts of the planet and at all times of the year.

This corner of the world located in the Normandy west, developed more in height than in extent, is most famous for the tidal phenomenon, as well as for the monastery dedicated to St. Michael the Archangel. Because of the continuous ebb and flow, the sea waters submerge the area around Mont Saint Michel every few hours.

Normandy is rich in history, alas relatively recent. In my trip to Normandy i had the opportunity to visit the areas where only 70/75 years ago, the most significant battles of World War II were fought.

Tip: also read -> Among the sites and beaches of the Normandy landings

How to go from Paris to Mont Saint Michel

If you are in the beautiful French capital and want to have a unique experience, moving from Paris to Mont Saint Michel is the perfect choice to spend a day in full contact with nature. There are several ways to enjoy this paradise, first of all choosing a tour that I recommend in the first paragraph. 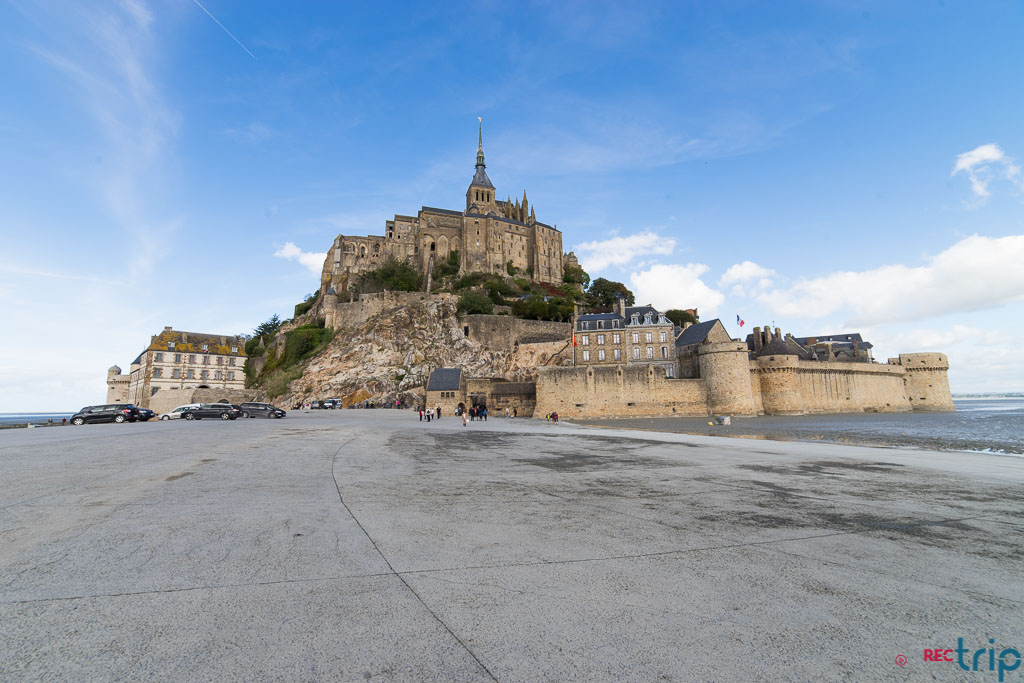 From Paris to Mont Saint Michel: day tour from Paris

Mont Saint Michel can be reached in many ways. In this case more than ever it is essential to emphasize the role of organized tours.

From a naturalistic point of view, this is a problematic geographical area due to the added effects of the sea and the Couesnon River. For this reason, it is highly recommended to be accompanied by experienced people who, above all, know the place,

CLICK HERE to find out prices and, if you want, purchase the guided tour to Mont Saint Michel from Paris. Going with a guide is the best choice.

Therefore, the best way to visit this fascinating place is to participate in group trips that last a few days. One can decide to take mini tours from Paris to Mont Saint Michel with round-trip day trips starting from the French capital. The choice can fall on packages that include the entire route and a visit to the abbey, or on solutions with a native-language guide or, again, with an overnight stay in a restaurant.

You may also be interested in the A SKIP-THE-LINE TICKET access to the abbey. If you have more time, you might opt for a guided tour that includes other parts of Normandy and goes as far as Saint Malo or a trip to the Beautiful Loire Valley Castles.

From Paris to Mont Saint Michel: by train from Paris

For obvious reasons, there is no train station in Mont Saint Michel. Those who lean toward using the train from Paris can get to some nearby locations in Normandy, such as Pontorson. Alternatively, one can get to Brittany, either to Rennes or to Dol De Bretagne (for which, often, there is a change in Rennes itself). Both are also served by high-speed lines with departures from Paris.

The reference station for the TGV network in the French capital is Gare Montparnasse, which can be reached by Metro 4 from Gare de L’Est and by Metro 12 from Paris Saint Lazare.

Once in Normandy or Brittany, simply take a bus in the direction of Mont Saint Michel or, alternatively, a cab. In this case, however, the journey becomes much more expensive.

While not the most convenient, the French rail network offers many daily runs. However, you have to be careful about the timetables for the return journey. If you don’t want to risk missing the last trains of the day and finding yourself without knowing where to stay for the night.

That is why I prefer the organized tour option I mentioned in the first point. Or, another excellent alternative is to go from Paris to Mont Saint Michel by car, even better if you include this leg in a road trip itinerary in Normandy.

From Paris to Mont Saint Michel: By car from Paris

Although it is no longer possible to leave cars at the foot of the island, the car is still a very good option, but you have to park much earlier, in the spaces in front of the shuttle bus and suburban bus stops. For how and where to park I refer you to this excerpt from one of my articles -> CLICK HERE

In case you arrive in France by plane and want to lean toward this solution (which, by the way, is not among the best), you should BOOK CAR HIRE HERE.

Why is it not possible to park near Mont Saint Michel?

You have to think that, due to the sudden increase in water flow, leaving cars in low-lying areas has always been a big risk. Especially if, due to some unforeseen event, you happen to stay too long on the island.

The difference between high and low tide levels can be up to almost 15m. Since the footbridge has been active, the parking lots downstream of the island have been decommissioned so as to eliminate the root of the problem.

Therefore, from a certain point on, it is preferable to reach Mont Saint Michel on foot, by shuttle bus or by booking a buggy ride, for a romantic transfer.

From the Paris airport to the center and then Saint Michel

Regardless of the means chosen by which to move, it takes four to five hours to travel from Paris to Mont Saint Michel. But how do you get from the airports to the center of the capital to join an organized tour?

Those who do not plan to stay in the city should consider the stop on Rue de Pyramides, in the Louvre area, as a reference for departures to Saint Michel. To get there, there is both the metro and the RER, a regional express train network that complements the underground service by rail.

Charles De Gaulle Airport, it is best to follow the standard high-frequency route. Simply take the RER B in the direction of Saint Remy les Chevreuse station and stop, about forty minutes later, at Chatelet-Les Halles. From there one must take the Metro 14 coming from Saint Lazare station to arrive at the Pyramides destination about two minutes after getting on.

Orly Airport, on the other hand, one must go to stop number 4 southbound and board the Orlyval bus, stopping at the terminus Antony. From there one must wait for the RER B to Charles De Gaulle train station and continue in the same way indicated for the main airport.

Visit Normandy, France: the Best Things To Do