On a trip to Normandy there are plenty of places to include in the list of “places to see once in a lifetime”. Among them is certainly Mont Saint Michel with its abbey in the middle of the sea.

Mont Saint Michel is truly unique. When you stand in front of it you find it hard to think how the tides can, twice a day, make an island out of this rocky spur in the middle of the sea.

Even from above, from the panoramic viewpoints of the abbey, you can’t see how far you go to “hide” the sea water. There is only a huge expanse of wet sand with a few puddles of salt water here and there.

What and where is Mont Saint Michel?

We are talking about Normandy. It is in the far west of this French region. Just shortly before Brittany begins there is a small island in the middle of the sea. On this island, in 708 A.D., after 3 apparitions of the archangel St. Michael, the bishop of Avranches ordered the construction of the abbey on Mount Tombs.

Initially it was a small church, however, over the centuries it was expanded and raised more and more. Walking inside the abbey of Mont Saint Michel you can see how these passages have little by little changed the appearance of Mont Saint Michel making it what it is today.

Throughout history it also assumed military characteristics. It was a symbol of French independence as it was impossible to besiege because of the tides.

Mont Saint Michel has therefore had an important history by changing its destination several times, consider that it also became a state prison. These continuous upheavals of its functions continued until the second half of the 19th. Thanks to romantic intellectuals, Mont Saint Michel was considered a historical monument and therefore a place to be preserved.

Its nature as a place of worship only reappeared in 1969. During that yeas, a small group of religious returned to live in the abbey buildings.

If you want to learn more about its historical aspects: click here

After these brief and superficial historical hints, we now come to the present day.

Mont Sain Michel is a UNESCO World Heritage Site. It’s one of the most visited destinations in the whole of France and for many it’s the symbol of Normandy. After all, it is a special place that attracts thousands of visitors every day.

The main feature of Mont Saint Michel is that it almost completely becomes an island whenever there is high tide. Normandy, like the whole north coast of France, is heavily impacted by the tides. I told you about it on the post about how to visit the Étretat cliffs. And I mean that in the area of Mont Saint Michel the water is miles and miles away, about 15 km from the coast. Every 6 hours there are either high or low tide peaks and in this area this becomes more evident.

During the full moon the tide phenomenon is even stronger. Sometimes the abbey returns to being a real islet in the middle of the sea for a few hours.

How to get to Mont Saint Michel and where to park

Until 2012 it was possible to get to the entrance near Mont Saint Michel by your own private vehicle. However, from then on, the situation changed as modifications had to be made in order not to alter the show of the tides.

In fact, the dam, which in the past was built to allow access to the bridge, has been replaced by a suspension bridge over which pedestrians, public transport and horse-drawn carts pass.

The only way to get to Mont Saint Michel is to leave your car in the special outdoor car parks. After that you can use the free shuttle bus (7.30 am to midnight) that leaves from the same parking lots and drops you off just before the entrance.

The alternative is to take a nice walk of about 3 km enjoying the view little by little.

What to do in Mont Saint Michel?

The islet must be visited on foot, discovering every little corner of the island. You must find out every little piece of the bay of wet sand, stopping for a drink in its beautiful bars set in the stone walls or buying some souvenirs in the classic tourist shops.

The visit of Mont Saint Michel and its abbey will keep you busy for about 3 or 4 hours.

I recommend you to enjoy every landscape slowly. From the top you can enjoy a wonderful view of the bay that faces the open sea or the inland coast. You can see all the people coming back from the excursions in the bay moving in single file following the local guide.

It is fascinating to think that after a few hours all that landscape will be covered by meters and meters of salt water. Yet it is like this and the arrival of the tide is so fast that many consider it a galloping horse. That is why it is forbidden to venture on the stretch of wet sand on your own, it is imperative to join organized tours.

I would like to emphasize this aspect. One of the problems of Mont Saint Michel is that around the islet there are also quicksand. Only local guides who know the area very well can move safely. Be careful!

Among the activities to do around Mont Saint Michel there are excursions on foot or on horseback. It could be a good idea to combine a visit to the abbey with an experience in the bay.

Visit the Abbey of St. Michel

Another thing not to miss is a visit to the interior of the abbey of Mont Saint Michel.  The entrance fee is 10 euros. Through a compulsory route you can enjoy almost the entire complex. The tour will begin from the highest floor and continue through the interior of the abbey, passing through its courtyards, the cloister and arriving at the original core, the Romanesque crypts.  The visit is absolutely worth the price of the ticket. After all, when will you have the chance to return to Mont Saint Michel?

The opening hours and opening days of the abbey are:

Times of the tides of Mont Saint Michel

I must admit that understanding the tides time wasn’t so easy. Well, in reality, it’s very simple, but it took me a while to figure it out.

Where to find them?

First of all, for the tide times of Mont Saint Michel I suggest you to check the official website where you can download the detailed calendar.

I will try to assist you with the reading, you will find for each month a page like this one: 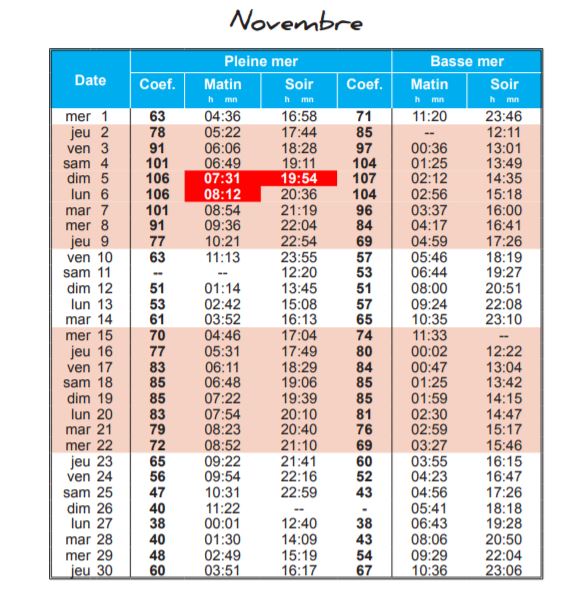 How to read them?

The bright red coloured dates represent the strongest events, which can also be seen by the higher coefficient; the tide force scale is up to 120. The moment with the greatest force was the 20th of March when the coefficient was 119.

In the case of the 5th of November if you wanted to see the water increase and get to the building, you would have had to arrive in the afternoon to wait for the arrival of the high tide.

Basically every 6 hours the water movement is inverted and the “complete cycle” takes place about every 12 hours.

Visit Normandy, France: the Best Things To Do