Home ITALY Monte Isola on Lake Iseo in Italy: What to See, Info and...

Monte Isola, or Montisola as it is known, is the largestlake island in central/southern Europe.

Ever since I was a child, when I used to go to the small village of Maspiano (hamlet of Sale Marasino) where my grandparents had their house, I always looked with admiration at this giant island perfectly centered in Lake Iseo.

A mountain in the lake, precisely, a Monte Isola!

As a child I did not go there often, although it was very fascinating to me. I was then able, in later years, to appreciate it on my own. Now that I live in beautiful Franciacorta, I am able to go there more often, even for a simple dinner overlooking the lake.(Read also Best Things to do and see in Franciacorta).

Although I had already included it in the article on the 15 Things to Do Around Lake Iseo, I had not yet written an article all about Montisola.

In this article you will find all the information you need to be able to appreciate Monte Isola regardless of whether yours is a weekend visit (highly recommended) or a sparse day trip. You might be interested in Things to Do in Brescia.

Monte Isola is considered one of Europe’s largest lake islands; it became very famous after the Floating Piers event in 2016. Christo made it the set of one of his most beautiful artistic creations for two weeks. Immense orange-colored floating piers connected Sulzano, Peschiera Maraglio and theisland of San Paolo. 2 weeks of total chaos, thousands of visitors to an area that, until recently, had never had such fame.

Thus Monte Isola was discovered by the World, although the people of Brescia had known it long before.

What is Monte Isola? A small floating paradise where there are no cars, only mopeds, bicycles and a few buses that move between the main centers of the island. There are as many as 12 hamlets, some mountainous, some lakeside, and the municipal territory also includes the two small islands of San Paolo and Loreto.

Locations on the island

As I mentioned earlier, some villages are closely related to the lake and others cling to the various slopes.

Where to stay and sleep?

If yours will not be a day trip, sleeping on Monte Isola could be a really interesting experience. CLICK HERE to see all the solutions present on Monte Isola.

How to get to Monte Isola?

There are several ways to get to Montisola, all of which obviously end with taking the ferry. By bus: you have to get off at Sulzano or Sale Marasino. By train: you can use the Brescia – Iseo – Edolo train, getting off at Sulzano or Sale Marasino. Mind you, it also stops at Rovato, so for those coming from Milan or Bergamo you can catch the connection at this station. By car: find information in the next paragraphs, especially about parking.

Where is it located

In the middle of Lake Iseo, just a few kilometers from the beautiful Franciacorta I highly recommend you visit. Just as I recommend that you visit all the other splendid locations in the surrounding area. A short distance from Monte Isola, continuing into Valle Camonica, you can also visit the famous rock carvings in the various protected parks such as Naquane (UNESCO heritage site).

Basic point: to get to Montisola, unless you have your own boat, you will have to use the boats/ferries that shuttle between:

Timetable: in the daily 8 a.m. to 8 p.m. slot, indicatively there are ferries every 15 minutes between Sulzano and Peschiera and about every 20/25 minutes between Sale Marasino and Carzano. Connections also take place at night, but under certain conditions (night time approximately between 00:00 and 05:00).

I recommend, however, that you investigate further on the website of Navigazione Lago d’Iseo -> HERE find the timetables.

Fares: the A/R ticket = €5.70 (summer 2022 prices) including €1.5 Montisola landing fee. For all fares, even for those traveling with bicycles or dogs, I recommend learn more about fares HERE. On the linked site you will also find information should you want to discover other locations on Lake Iseo by moving by boat.

Where to buy tickets?

Are you traveling with a dog?

If you are traveling with your 4-legged friend, know that you can bring your dog with you to the island. I highly recommend it because it will be very nice to walk or do some trails with him/her. Beware, however, that you will need a leash and muzzle to board the boats. If you don’t have a muzzle you can possibly buy it at the ticket office in Sulzano (assuming they have any available).

Where to park to take the ferry to Montisola?

Good question. No kidding, don’t worry, there is room but if you want to enjoy the day to the fullest, without stressing over finding parking, the advice is to arrive early in Sulzano or Sale Marasino and park in one of the many paid parking lots.

Once you arrive in Sulzano, go right on the uphill road that you find at the only traffic light in the town on the main road. You will find several parking lots available.

If, on the other hand, you want to start from Sale Marasino, there will be somewhat less parking availability near the landing stage. However, along the main road, one kilometer before reaching the ferry area, you can also find free parking lots, but with parking disk.

Monte Isola: what to see and do, 10 suggestions

Okay, now that I have explained to you in a nutshell how you can get to Montisola, let’s look at experiences to do, what to see…and why not, what to taste on the island.

1 – Tour around the whole of Montisola on foot or bike

There are no cars in Montisola, there are few scooters and many bikes. You can move between the various locations through the use of a city bus, but if you will have chosen a Natural Paradise like Monte Isola, it will be because you will want to enjoy some peace and isolate yourself from the daily din, discovering the various views on the lake.

You will be able to bike or walk along the coastal road that for most of its route continues along the edge of the lake. It is about 10 km of walking or biking. I guarantee you will really enjoy them. If you then bring your own towel, you might even consider lying down on some meadow and enjoying the view of the lake.

2 – Climb to the Sanctuary of Ceriola

The summit of Montisola. You look at it from afar and know it must be your next goal…assuming you love to walk. The Ceriola Sanctuary is a“must do it” of things to do in Montisola.

You can get there with a moderate hike. Nothing exceptional. Simple hiking shoes, or at least shoes with a non-smooth sole, will suffice. Avoid only “all star/mocassin/flip-flop” like shoes. Everything else is fine.

There are several trails that allow you to get to the Ceriola Sanctuary from the various hamlets. I bring back the map to give you a more complete idea of the various routes. Consider that from Carzano or Peschiera Maraglio to the Sanctuary is about a 60/70 minute walk depending on the pace you have.

Why go up to the Ceriola Shrine? Because if it’s a nice day and clear skies, the views will pay you back for all the effort you put in to get there.

History: if you want to learn more about the historical/cultural/religious aspects, I recommend to read all at this link.

As you ascend to the Ceriola Sanctuary, you will have the opportunity to pass through several hamlets as well as mountain hamlets of Montisola. You will notice that they will have a special flavor. Small, well-kept stone cottages, very close to each other. Tiny villages but with irresistible charm, set among small olive groves and fields overlooking the lake. 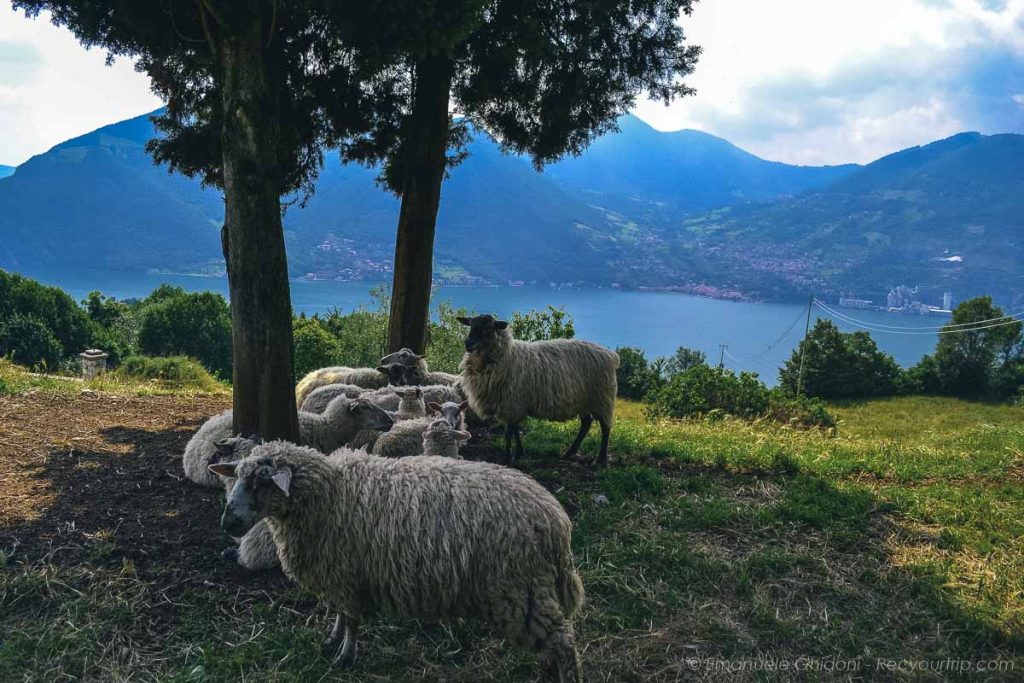 4 – Visit the villages on the lake

Peschiera is the largest village and also the one to which the majority of tourists land. There are more activities such as bars and restaurants so it is ideal if you want something more “bustling.” To call it “bustling” is an understatement; tranquility reigns supreme in Peschiera as well.

Sensole and Carzano are little gems not to be missed. More collected, with fewer tourists. In short, you want the real advice? Visit all three!

Point number 5, as 5 are the years between one Montisola Flower Festival and the next one. It is called “Feast of the Holy Cross” and involves the village of Carzano, in the north/east part of the island. It is said that the feast was established in the seventeenth century and the cyclical nature has been strictly adhered to ever since. In short, a festival not to be missed where, for 4 days, the arches are covered with pine branches, paper flowers and illuminations.

Loreto Island and St. Paul Island are two privately owned islands. Not bad to have an island on Lake Iseo as your property. Well, you will therefore only be able to see them from a distance, from the shores of Montisola.

With the Chisto event, considering that the floating docks enveloped the island of San Paolo, there was a chance to see it more closely.

7 – Taste the Sardines of Montisola

Montisola is famous for its sardines, or rather agoni. I personally love the sardine from Monte Isola. Every time I find it in the restaurant, I close the menu. Salted just right, with toasted polenta it is one of the typical dishes of the area.

The Montisola sardine is a slowfood presidium; to learn about the process by which it is produced, you can learn more on the slow food website. Don’t miss it because it is something exceptional.

Montisola may be tiny with its only 12.8 square kilometers in area, but real delicacies are produced in this “tiny” territory. 3 are the ones you cannot miss and should definitely take home. First, the Montisola sardine, but I already told you about that one in the previous paragraph.

The other two typical products are:

9 – Admiring the Fortress of Martinengo

This is one of the most important monuments of Montisola. A real castle, called Olofredi Castle, behind the village of Sensole. Built of the 14th century for defensive purposes, in the 15th century it was bought by the Martinengo family. They did not stay there long, so much so that by the early 1600s the castle was already in decay. In the 1960s the fortress was bought by a family from Monza and is still a private property.

You can admire it up close, continuing toward Menzino, or from the top of the Ceriola Sanctuary.

Montisola was one of the world capitals for the construction of fishing nets. Strange to say, but the island of Lake Iseo was one of the largest producers of nets in the world, and for many centuries this activity was the main source of livelihood for many of the families.

In such a reality as Monte Isola, therefore, there can be no lack of a Net Museum. This is a private museum located inside the oldest net factory. Here is a short video made in pictures that succeeds in giving you an idea of what you can find in the Museum.