The province of Brescia is an area rich in history, full of evidence of past eras. Among these, it was first the Roman period that left evident signs. Today cultural sites that protect Roman remains are quite widespread in this corner of Lombardy. It is enough to think of the beauty of Roman Brescia, in the city center of Brescia, to understand how and why the Romans had considered it important to settle in the Brescia area.

The process of Romanization took place in the Augustan age; it was peaceful although rather rapid. The Camonica Valley was Romanized in 16 B.C. and in just under half a century the community was organized into autonomous “res publica.”

In Valle Camonica it is possible to find evidence of completely different eras. A short distance from the lake Iseo and the well-known Camonica rock carvings, one can admire the remains of Roman civilization, the signs of which are still clearly visible. The Roman presence is not as substantial as that of the cave paintings, but it is still noteworthy.

The evidence of the Roman period is all concentrated in the area between Breno e Cividate Camuno. These are two towns just a few kilometers apart. They are also connected by a pedestrian bicycle route. It runs alongside the course of the river and passes some important finds from the Roman era such as the Sanctuary of Minerva, located in a rural area just before arriving in Breno. 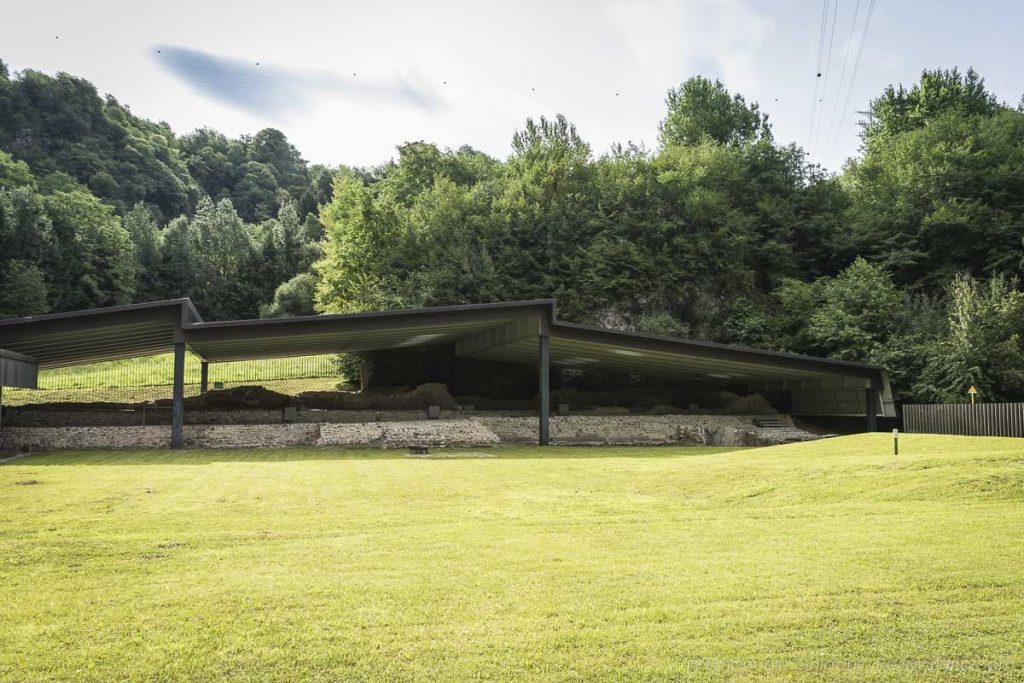 On the Roman itinerary of the Camonica Valley, the main sites are all a short distance from the river. The bicycle and pedestrian route that connects the two towns, besides allowing people to enjoy nature and its peace, seems almost designed on purpose to allow a mix of cultural, natural and sporting aspects.

Starting from the Sanctuary of Minerva or, vice versa, from the Theater and Amphitheater Park, it is possible to visit all the places of interest on the Roman route. This is the best way to spend a day of sports and culture.

Here is a possible itinerary to discover this part of the Camonica Valley, an itinerary that starts from the town of Breno, passes through Cividate Camuno and ends in relaxation at the Terme di Boario. An important and very well-known stop in Valle Camonica. The Boario thermal baths, in fact, became a point of reference for relaxation and well-being around the end of the 18th century, thanks to“healthy magnesian and iron vitrinolate waters,” as Antonio Bazzini wrote in the“Cronaca di Lovere” in the early 1700s.

Despite the fact that it is not a testimony of the Roman era, I believe that the castle of Breno is a splendid beginning of an itinerary that cannot but be mentioned, even if not related to the Roman era. 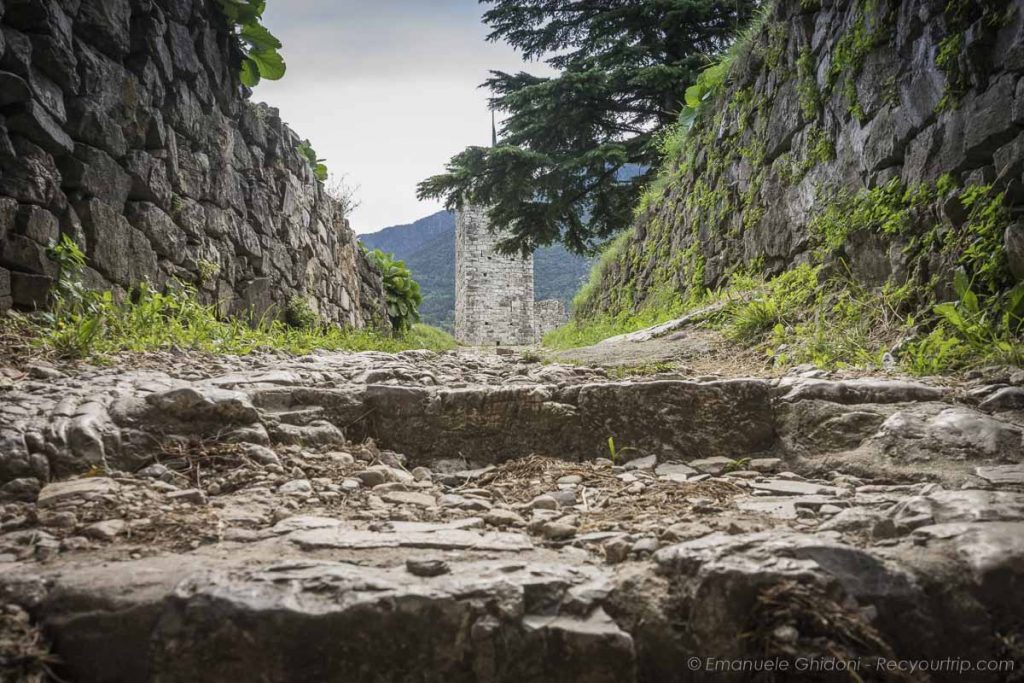 The Camonica Valley from the cultural point of view is a complete territory. In addition to the Roman route and the Camonica route, it is possible to walk and discover the medieval route through its fascinating castles. That of Breno is one of the best medieval expressions in the Camonica Valley. It was built on a rocky outcrop close to the town in a highly strategic location. The valley at this point forms almost a funnel allowing better control over the entire area below.

To visit the castle, from the village center it is necessary to walk up a cobblestone road that leads to the entrance in a few minutes. The climb is steep but once you get to the top, although it is bare inside, the view repays all the effort made to reach it. 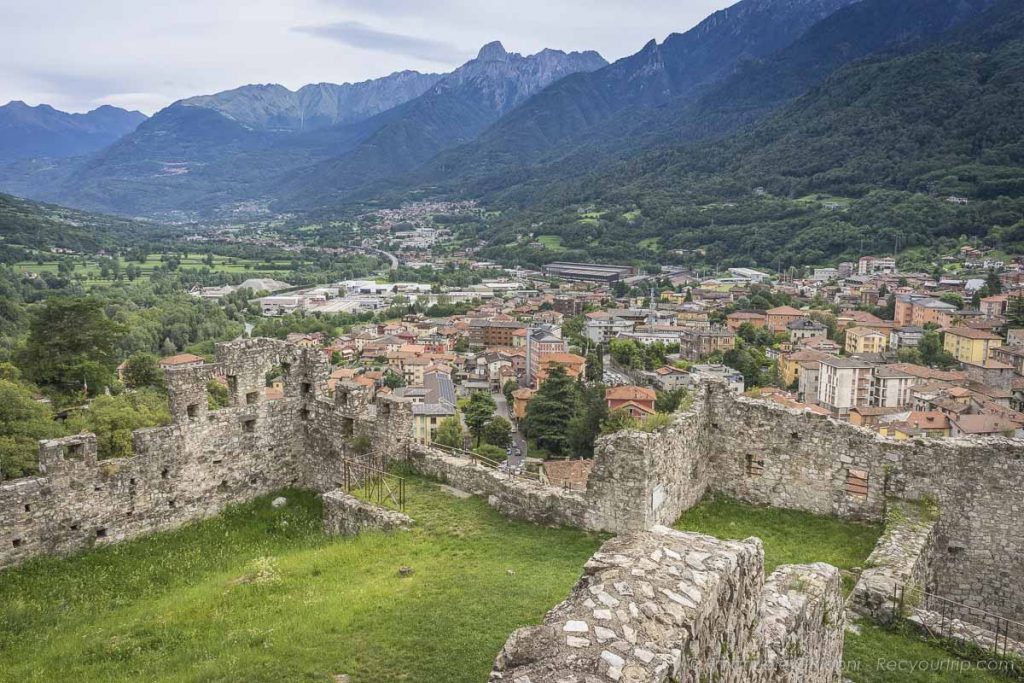 2 – The street art of the goddess Minerva

Italian artist Ozmo wanted to pay homage to Minerva’s shrine with his visual art through a huge black and white street art piece visible from Breno’s main square. A representation of Minerva that almost seems to watch over the entire town. 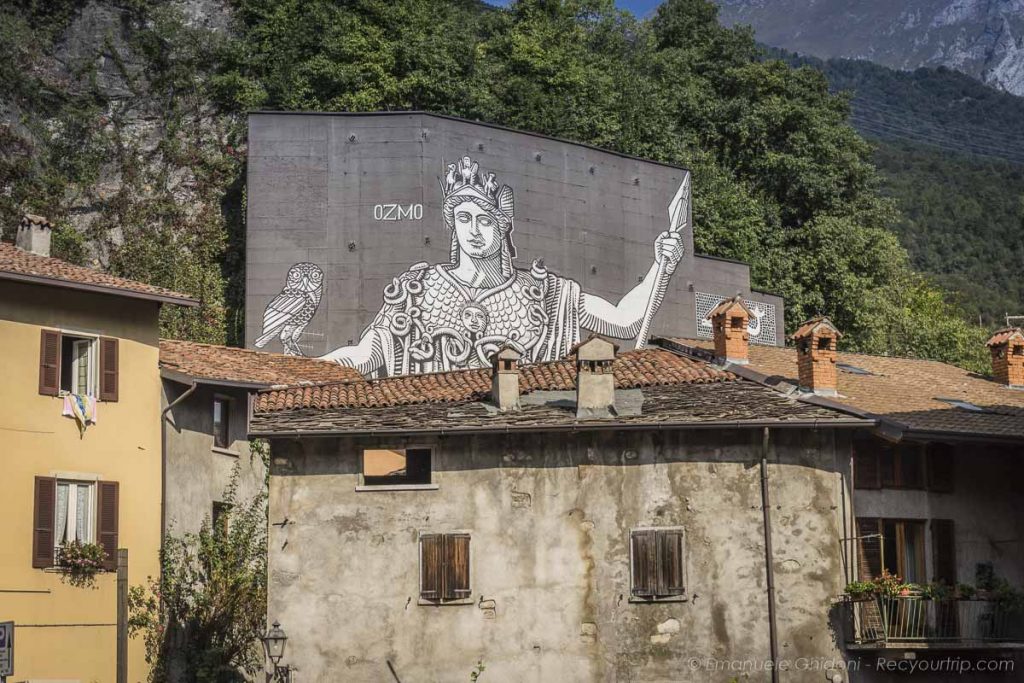 3 – The Sanctuary of Minerva

Probably the most interesting Roman find in the entire Camonica Valley.

Not far from Breno, in the locality of Spinera, it is possible to discover this sanctuary that was built in a special location: on the banks of the valley’s main river, the Oglio River. Its construction took place following the foundation of the nearby Cividate Camuno, which at that time was the most important town in the Camonica Valley. It was dedicated to Minerva, the “patroness of human endeavors,” this fit the location of the site as it was a compulsory crossing point to cross the Alps.

Not much remains of the shrine. Beautiful mosaics and the statue of Minerva are still visible, but it is no more than a resin reconstruction. 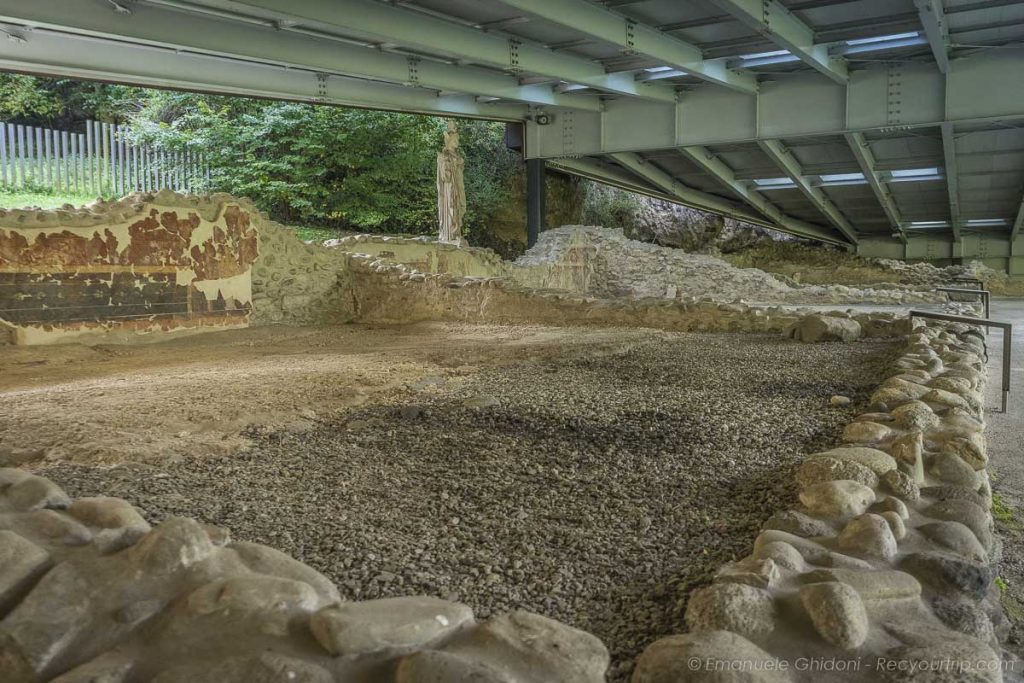 The original statue is housed in the nearby National Archaeological Museum of the Camonica Valley. The site is not crowded with tourists, which I think is an added value. Thanks to panels with computer reconstructions, one looks around trying to imagine what it was like during its heyday.

When I visit places like this I always pause to think about how we probably walk over an indefinite number of archaeological artifacts every day that have yet to be discovered and perhaps will only come to light by accident. Minerva’s shrine itself was discovered in 1986 during excavations for the laying of public pipelines.

Visiting the Sanctuary of Minerva

The site is managed by volunteers who open the Minerva Sanctuary on Saturdays and Sundays from 10 a.m. to noon and 2:30 p.m. to 6 p.m. During the rest of the week it remains closed. Nevertheless, if you were to pass by on a midweek day, it is possible to see much of the Roman site even while staying outside the demarcated area.

Getting to the shrine by car is not difficult but you should pay attention to the few signs on the main road. Moving toward Breno from Cividate Camuno you come to a point where the road passes over the Oglio River; at that very point there is a sign on the left to turn for the parking lot. The site of Minerva is only a few hundred meters from the parking lot, you only have to walk a short distance on a bicycle/pedestrian path and you reach the Roman site. Conversely, coming from Breno, the parking lot is on the right, just after crossing the bridge over the Oglio River. 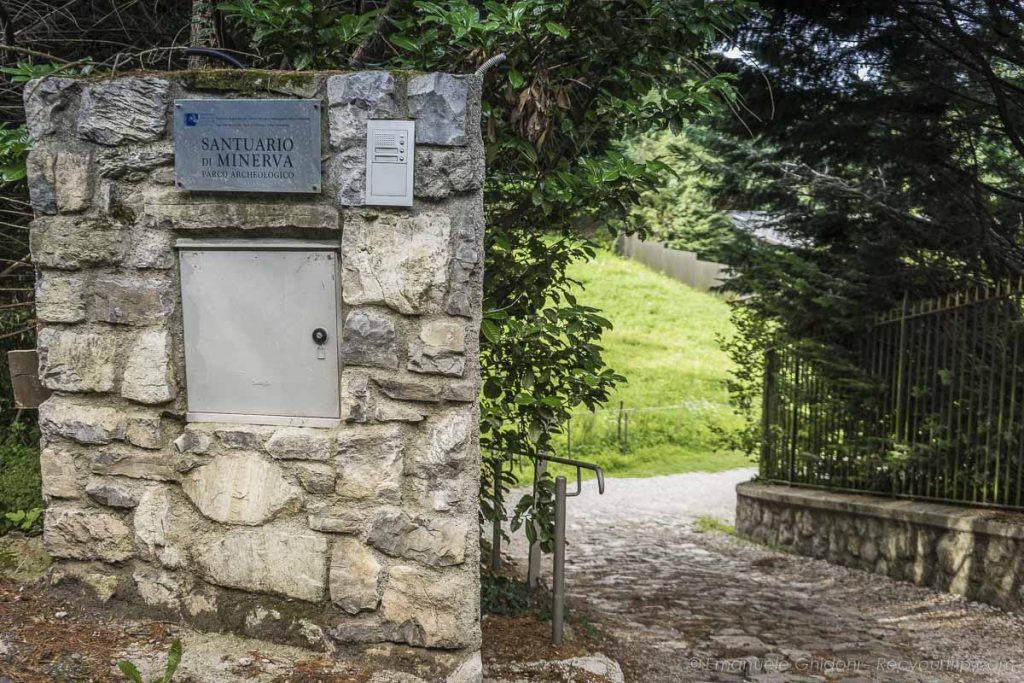 4 – The cycle-pedestrian path to Cividate

The first part of the itinerary is concentrated in Breno and ends with a visit to the Sanctuary of Minerva. The other Roman remains were found in Cividate Camuno. Here it is possible to visit the National Archaeological Museum of the Camonica Valley and the park of the Roman Theater and Amphitheater.

A bicycle or a nice walk are both the perfect way to reach Cividate. What better way than to take the bicycle and pedestrian path that runs alongside the Oglio River? An excellent alternative to the automobile, ideal for those who enjoy slow tourism. For completeness of information, this is just a section of the cycle-pedestrian path that in its entirety begins in Capo di Ponte and ends near Pisogne.

5 – A culinary stop: the spongada

A self-respecting itinerary also needs a culinary component, which is even more true after riding the cycle-pedestrian path from Breno to Cividate Camuno.

The spongada, in my opinion, is one of the most interesting typical products of the Camonica Valley. I would eat it all the time. After all, when butter, eggs, flour and sugar come together, something extremely good can only come out of it. So here is the spongada, a sweet loaf of about 150 grams sprinkled entirely with sugar. I recommend you look for a bakery and treat yourself to a sweet stop in the village of Cividate and then proceed to the interesting visit of the Theater Park and Roman Amphitheater.

A few meters from the center of Cividate Camuno it is possible to visit the Archaeological Park of the Roman Theater and Amphitheater.

Admission is free. Of the amphitheater and theater, the structures that gave the elliptical shape typical of amphitheaters are very evident, but the structure of the stands is no longer visible. Panel reconstructions help to understand what this place looked like during Roman times. 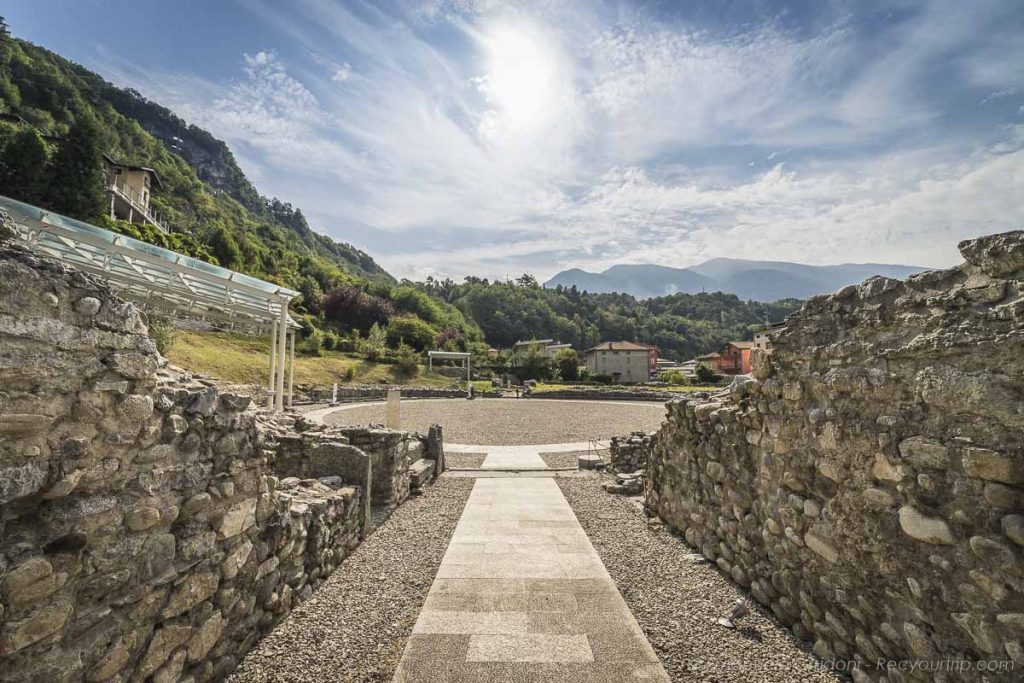 The panels also provide information about what the amphitheater was like for the Romans, how it was run, and what the main attractions inside were. Its maintenance, by the way, greatly affected the city’s coffers and accounts. Visiting this Roman site at leisure takes only 30 to 40 minutes.

On the way out you need to remember one very important thing. Although the entrance is free, both in this park and at the Sanctuary of Minerva it is necessary to sign an attendance register. This way they can attest to the number of people who visit the archaeological sites each year. A very important thing in my opinion.

7 – The National Archaeological Museum of the Camonica Valley

Of great importance, the National Archaeological Museum of the Camonica Valley preserves and enhances all the Roman artifacts from Cividate Camuno and the entire Camonica Valley. It is the last stop on this itinerary through which it is possible to discover the Roman remains of the Camonica territory. Inside, one can follow different thematic routes to discover the Roman era. Prominent among all the findings is the original statue of Minerva found in the nearby Sanctuary.

The museum, both conceptually and logistically, is the connecting point between the Roman site of Minerva and the Roman Theater and Amphitheater Park, which is just over 1 km away. The Museum is free of charge and remains closed every non-holiday Monday. It remains open Tuesday through Saturday from 8:30 a.m. to 7 p.m. and Sunday from 8:30 a.m. to 2 p.m. More information about the contents and thematic routes can be found on the Archaeological Museum Website.

8 – At the thermal baths of Darfo Boario

Okay, I told you that the one above was the last stop on the Roman itinerary. By stage, I meant cultural stage…. When we talk about “ancient Roman” we cannot but also associate it with the concept of Roman baths. So, since you will be a very short distance from the Boario thermal baths, why not add to your weekend in Valle Camonica a day of total relaxation?