The Marsala Salt Pans in Sicily are a unique sight. Imagine standing before placid bodies of water framed by slight white salt dunes where, suddenly, you can catch a glimpse of traditional mills. Keep imagining yourself witnessing this spectacle during the hour of sunset. The orange-red color of the waning sun turns to purple and the landscape becomes extraordinarily magical. Well this is one of the experiences you can have by traveling to the Marsala Salt Pans during an itinerary in Sicily.

Marsala Salt Pans: how to get there

The Marsala Salt Pans are definitely one of the best things to see in Western Sicily and in this case they are located in the Stagnone Islands Oriented Nature Reserve, which includes 4 islands: the island of Mozia, Schola, Santa Maria and the Big Island.

Here history, nature and culture come together as salt farming has been one of the main sources of income, as well as economic development, for the inhabitants of the area.

To reach the islands you will have to drive along the Trapani-Marsala coast road and follow the signs to the Historic Harbour of Mozia. Here you will be able to take the ferry and visit the islands of the Stagnone.

Keep in mind that the nature reserve and the beginning of the Marsala Salt Pans can be reached on foot after crossing a sort of ford that begins in San Teodoro (you can therefore park at San Teodoro beach). In this regard, remember to dress comfortably, perhaps in a bathing suit, as in some places the water may reach your mid-torso.

Marsala Salt Pans: where they are and what they are

Here you can admire picturesque windmills set in a landscape consisting of canals, sea water tanks and mountains of salt still to be worked. The view is exceptionally beautiful because of a totally natural landscape where time seems to have stopped.

Given the particularity of the place, since ancient times and also because of Mozia, this was a very important trading center where business took place between West and East. The first to understand its importance were the Phoenicians. Then again, saliculture has always been important since ancient times. Today, walking among these bodies of water, one cannot help but be impressed by the colors that acquire unique pinkish hues. 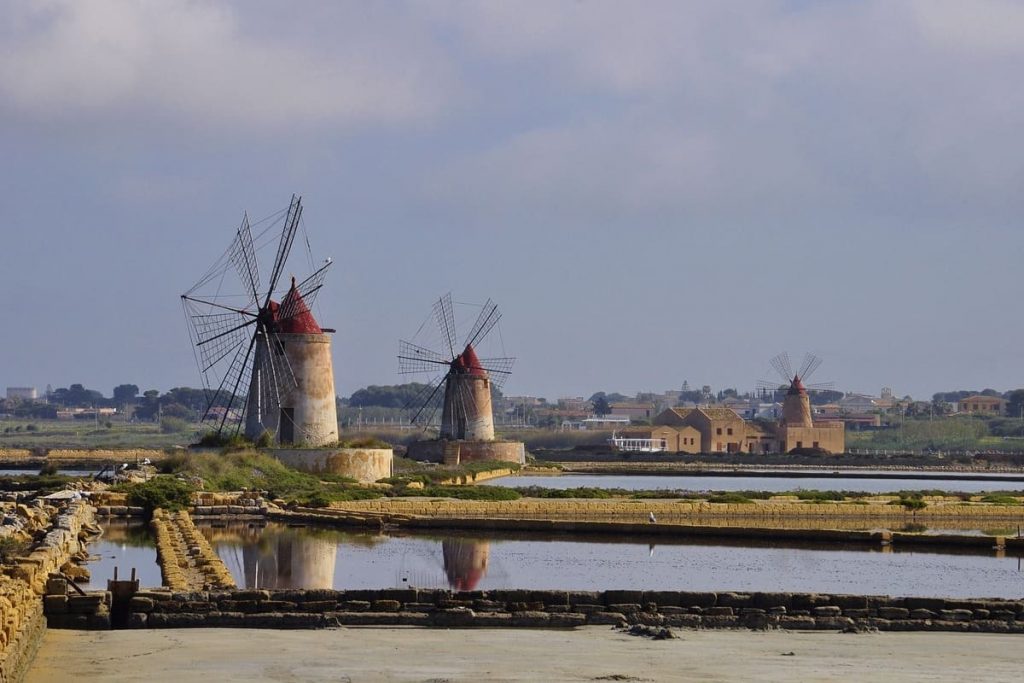 How did they form?

The Marsala Salt Pans are part of the Islands of the Stagnone Nature Reserve, in that stretch of land between Cape San Teodoro and Cape Lilibeo. The lagoon was formed by underwater currents; the sand moved by the water flows formed the Isola Grande, which became an obstacle to the open sea, thus creating the stagnation of sea water.

What to see at the Marsala Salt Pans?

The sunset of course! But not only that. That they are a place particularly loved by those who want to find the perfect mix of nature and romance is not in doubt. The Marsala Salt Pans, however, are more than just sunsets and rosy-hued photos. 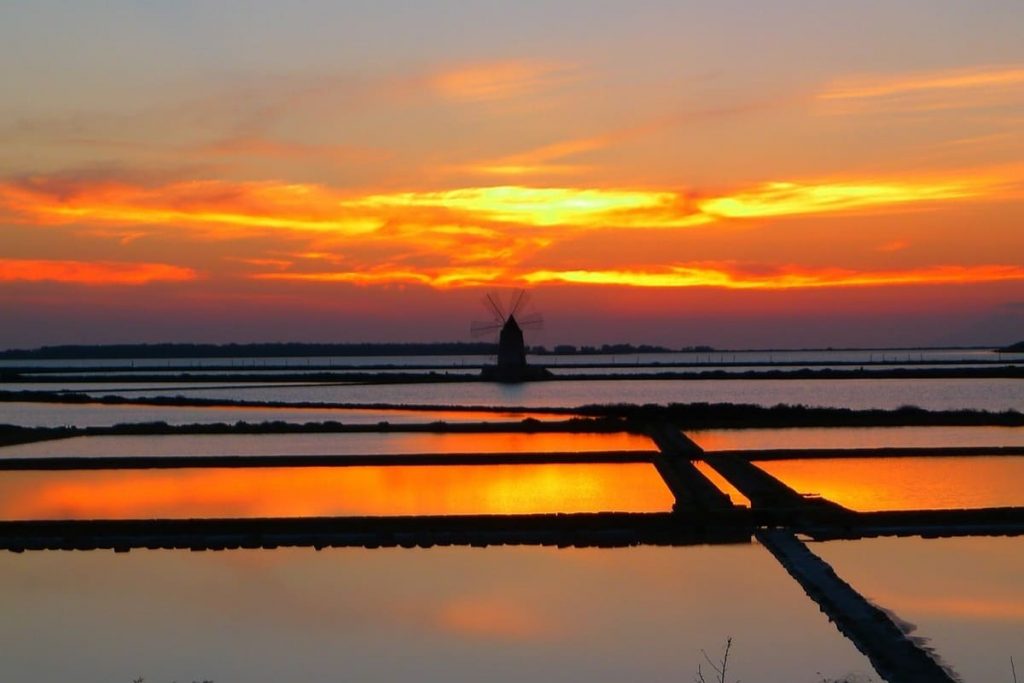 In this beautiful place in Western Sicily, it is possible to visit the Mulino d’ Infersa, a fully functioning mill that is a starting point for those who want to discover more about the world of salt-making. Inside the Mill is a museum, a salt workshop and a multimedia trail.

The Infersa Mill is located on the east bank, in which the salt pans of the same name are located: the Ettore and Infersa salt pans. As anachronistic as it may appear, it is still in operation. It is operated and grinds salt by the force of the wind.

The mill can be visited in summer in July and August, on Wednesdays and Saturdays from 4 to 6 p.m. A visit to the mill costs €8 (price 2021)

Birdwatching and Trekking in the Salt Pans

Visitors to the ancient Salt Pans of Marsala are immersed in an unusual and evocative landscape consisting of paths suitable for walking or trekking, admiring the unique windmills, the tanks used for the evaporation of sea water and the natural formation of salt. It is not at all uncommon to see real white mountains of sea salt grains protected by terracotta tiles.

In addition to these aspects, a walk inside the Marsala Salt Pans allows one to come across various botanical species, rare birds and butterflies that turn out to be very interesting especially for birdwatchers.

If you appreciate nature and are fond of bird sightings, the Marsala Salt Pans will be an interesting place to study and observe. Much of the fauna consists of numerous bird species including Pink Flamingoes, Black-winged Stilt, Fratino, Great Courier, Curved-billed Churlì, Magnattai and many others.

In the pool with the Salinai

If you would like to experience the thrill of being a salt worker for a day, you should know that between late July and early September, the Marsala Salt Pans allow visiting tourists to take part in salt harvesting by entering the tanks along with the people assigned to salt processing. You will be salt workers for a day: there are special tours that allow this kind of experience.

Tour to discover the Salt Pans of Marsala

Among the experiences I want to recommend there is definitely the possibility of visiting the salt pans in somewhat special ways: by boat with a guide who will explain step by step the history of the salt pans and satisfy all your curiosities about this spectacular Sicilian place. Among the recommended tours, I want to suggest two with FREE CANCELLATION. Flexibility is a very important element, especially when perhaps you are doing an ontheroad and, by definition, has many unforeseen events. I recommend:

Isola Lunga, also called Isola Grande, as is easily guessed is the largest of the four. From this, formed over the millennia with the accumulation of sand through a play of underwater currents, originated the lagoon as because of its location, blocked the normal flow of the sea creating a real lagoon. Surely the Phoenicians, excellent traders, realizing the natural formation of salt crystals, used this very island for the exploitation of the precious salt.

Schola, on the other hand, is the smallest of the islands in the Stagnone Lagoon and, in Roman times was the site of a school of rhetoric that gave its name to the islet, which today houses three buildings from the early 1930s and a cistern.

In the northern part of the lagoon is the island of Santa Maria, which has a strange lace-shaped configuration. It owes its name to the shrine of Santa Maria Valleverde that stands on this small islet.

Certainly the most important island of all those in the Stagnone is that of ancient Mozia, which today is called San Pantaleo. It turns out to be important not only for its landscape ambit, but especially for the archaeological one that testifies to its remote Phoenician origin of which it was an important colony. Passed under Greek rule when the Greeks colonized Sicily, the island continued to be a landing place for Mediterranean trade routes so much so that it was named by Thucydides and Diodorus Siculus.