Home IRELAND The Best Places and Things To Do in Donegal

The people say that Donegal is the roughest, wildest, most nature-bound part of Ireland, nothing less than the most fascinating.

Before I left for my road trip itinerary in Ireland, I was considering Donegal specifically to experience the thrill of sleeping in a lighthouse.

In this particular case it was to be the Fanad Head Lighthouse, a lighthouse overlooking the sea: stunning! In fact, I was not able to “bring home” this experience because of a problem with reservations not fitting together (beware that if you want to sleep in a lighthouse, they almost always require at least 2 nights).

Visiting the wildest Donegal was imperative. 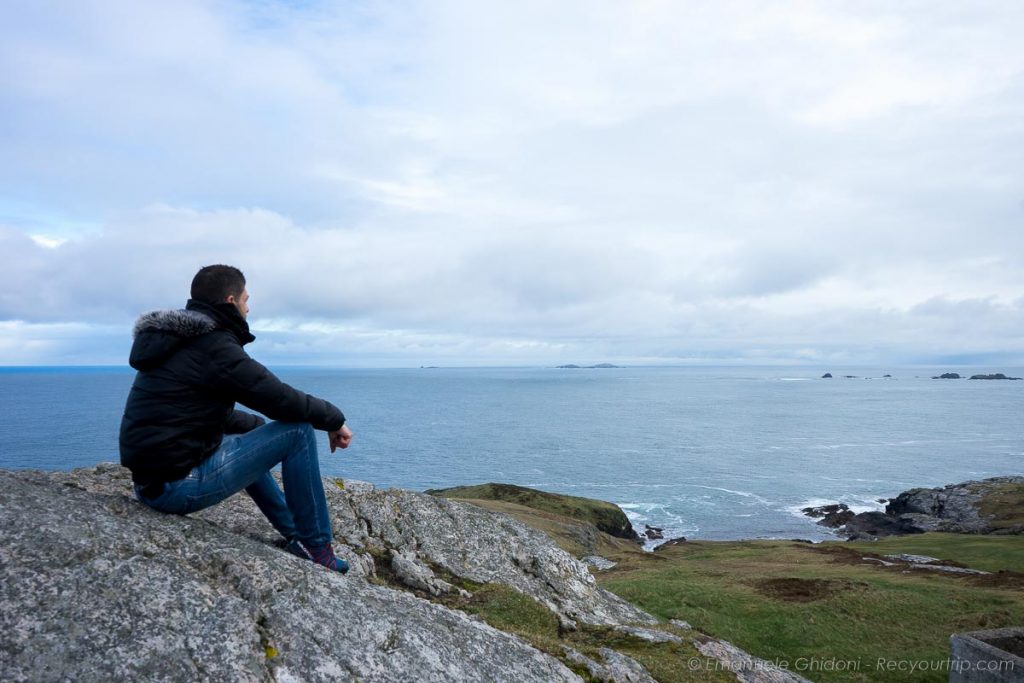 I managed to create an itinerary that could be covered in a day, showing me the best places in Donegal, fully savoring all the beauty of nature. Here is what to see in Donegal!

The northernmost point in Ireland, that’s how Malin Head is presented…and that alone would be enough to infuse it with great charm.

Yet, Mailin Head seen out of season is something more. You feel nothingness, the force of nature that on the one hand keeps crashing against the shores of northern Ireland and on the other with the icy wind pushes impetuously behind you. In the distance are scattered houses, pastures, cows and the silence of a place that certainly does not resemble classic mass-tourism ones, at least in March.

Getting to Malin Head on the Inishowen Peninsula, is very easy and, given the desolation of the country roads in this part of Donegal, you don’t even need to have read about my tips on driving on the left side of the road. There is no real left.

Malin Head is considered the starting (or even ending) point of the Wild Atlantic Way, the fantastic 2,500-plus-mile road that runs the length of Ireland’s west coast. You will find a small parking lot (by small I mean 5 or 6 cars) and a short climb up to the “Banba’s Crown” tower named after a mythical Irish deity. Here you will also see World War II lookouts protecting the Irish coastline.

Trails depart from Malin Head that will take you to discover the lower part of the coast. Actually, because of the bitter cold, I desisted from going to explore them, but if the day should permit try to go and see where they will take you. Malin Head is a place you absolutely must visit if you take a tour of Donegal.

A stunning stop in Donegal, there are no other words to be able to describe this out-of-this-world place. A spectacular, almost lunar setting, where the color of the water is such a deep blue that it does not seem real.

The Glenveagh National Park (official website) and its castle were a pleasant unplanned detour, but one that turned out to be the most beautiful place visited in Donegal. 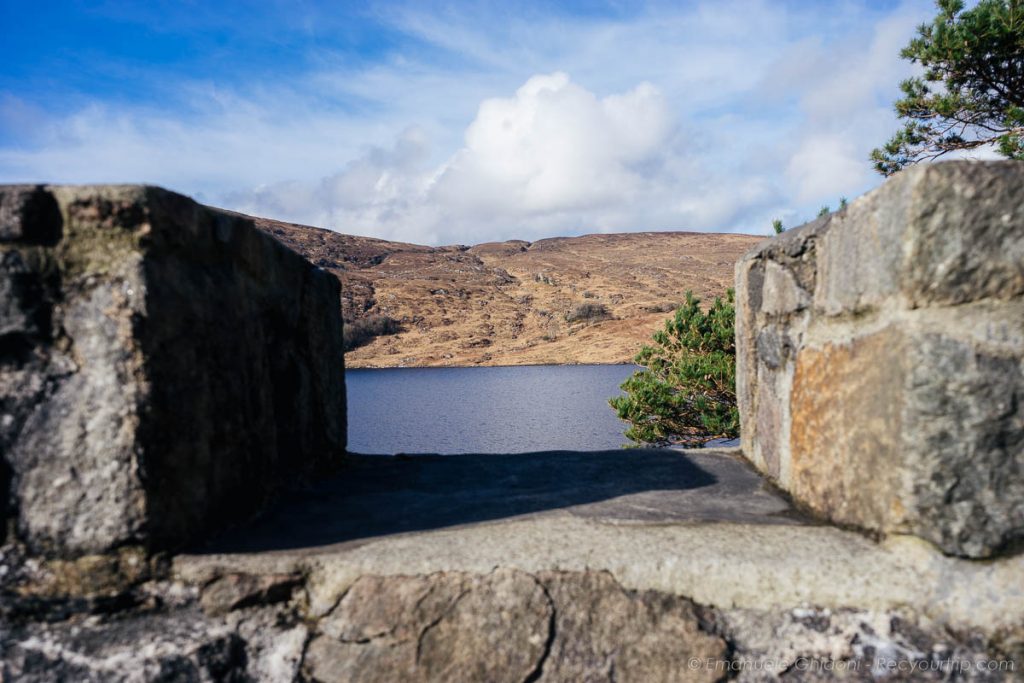 I had not heard much about it before I left. Thinking that Donegal was more of an area of Ireland to be discovered by car and from which to admire the scenery, I could not think there was such a beautiful castle on the shores of a lake and no one had spoken or written about it before (at least as far as my research was concerned).

The park: the features

The park is 170 square kilometers in size and within it is the castle and the lake: Lough Veagh. It is considered the perfect destination for those who enjoy walking and photography. There are many trails that wind through the various valleys, hills and mountains of the park; one of them is the “Glen Walk” of about 20 km.

The park was established in 1985. Ten years earlier the National Park and Monument Service had purchased this large slice of Donegal wilderness. Here nature takes over and the stresses of everyday life stay well away.

How to visit Glenveagh

To get to this remote part of Donegal one must cross lunar-looking wastelands. A pleasant drive across discovering incredible landscapes.

The park is located about 20 km from Letterkenny. To visit it you can either walk from the parking lot or you can use a convenient shuttle bus that shuttles between the castle and the visitor center. The cost is 3 euros A/R. The castle can be visited internally and the price is 7 euros for an adult, more information on discounts and/or groups can be found directly on the site I linked at the beginning of the paragraph. 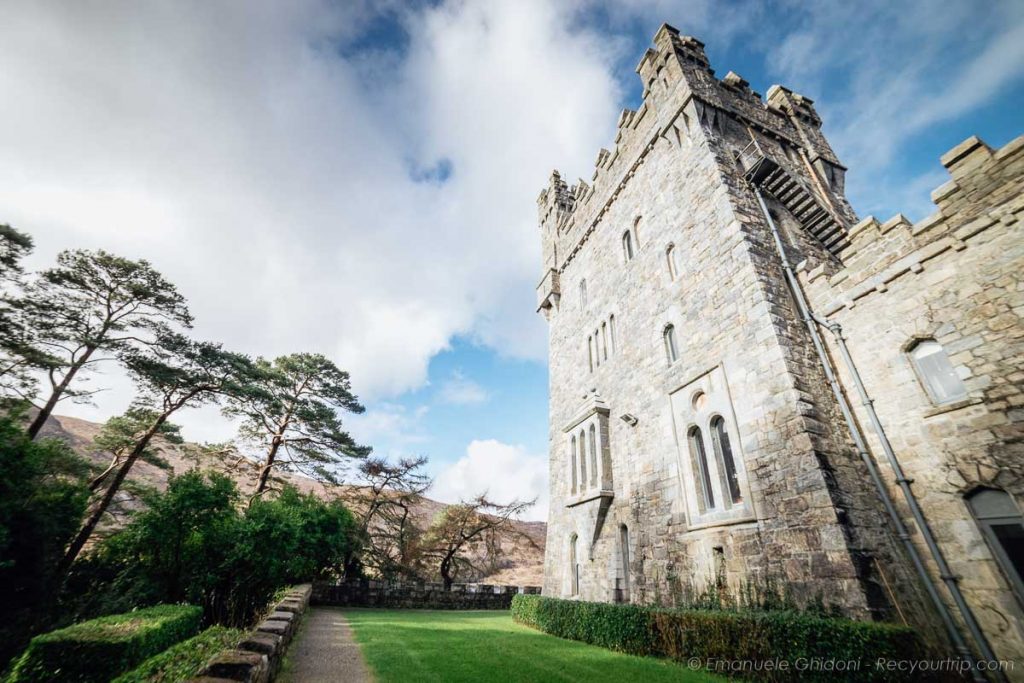 Even if you do not want to visit the interior of the castle, you can safely stroll through the gardens outside and take a thousand photographs of the beautiful view from its small walls.

That alone would be enough to convince you to visit this stretch of southern Donegal.

It should be added that they are not “accompanied” by all the mess and tourism that characterizes the Cliffs of Moher. For now, the Slieve Leagues are still under-visited, and that is a huge plus for them. No big parking lots or visitor center; in fact, the road to them is not even that smooth.

A narrow, impassable side road leads to a gate that you will have to pass through (and close behind you) to reach the summit and the small parking lot. The alternative is to leave your car at the first parking lot and then walk the last few miles. From the vantage points on the Slieve League you have breathtaking views of the sea and cliffs on the horizon. Here the only noise you can hear is that of the wind and nature.

Bundoran, two faces of one town

And then there is Bundoran, that town on the edge of Donegal that overlooks County Leitrim. It knows little of Donegal, but it still leaves you amazed.

Or rather, Bundoran is not a town. It is a small town crossed by the Wild Atlantic Way. In the off-season empties out completely, while in the summer it fills up with young surfers.

I happened to be in Bundoran on a damp evening in early March. Few restaurants open, a few pubs and a vast array of choices of…gambling halls. It may sound strange, but Bundoran gave me the feeling of being Ireland’s gambling capital. Giant (and empty) halls filled with slots and little else. The realm of Irish temptation. All kidding aside, it seemed to me a quiet tourist resort that, like any off-season summer resort becomes unwelcoming, although, I must say, I had one of the best dinners of my entire trip to Ireland. A restaurant where we ate very well and felt like “grandma’s house” from how much they pampered us.

Donegal is one of those Irish regions not to be missed. Visit it as quietly as you can and try to devote more than one day to it because there would be so many mini-excursions or even short treks you could do that would give that extra touch to your trip.

How to Rent a Car: Tips and Some Raccomandations