How many times I’ve been around there, and yet in my life I hadn’t yet gone to see San Marino. What a big mistake! Only now I realize what I missed.

It’s possible to visit San Marino during with a day trip. The oldest republic in the world is about forty minutes away from nearby Rimini. Why not combine a beach holiday with a visit to this beautiful country with an amazing medieval village?

The 10 things to see and do in San Marino

To make your visit easier I will list them in order on the itinerary starting from the door of San Francesco.

How not to start with the main entrance to the city. On your way up from the car park you will find this small door which is the official entrance to the old town. Built in 1361 as a guard post, it was later expanded in 1451. Its name comes from the fact that it was built from the walls of the Franciscan Convent. In front of the door there is always a watchman who indicates the access.

One step inside the walls and on your right you will notice this very peculiar museum. Another must do in San marino if you like this kind of attractions. It is a museum, considered one of the most disturbing in the world, dedicated to all the torture techniques that have characterized history. I have not visited it for several reasons. Firstly because of lack of time, and secondly because I personally am not attracted by these topics. I don’t like everything that is torture, agony and pain. However, I understand that for lovers of the genre it is considered an interesting museum and for this reason I would like to mention it to you.

Continuing on the road uphill to the left of the door of San Francesco you will arrive at Piazza del Titano where you will find San Marino National Museum. Initially it was in a different building. In fact, it was inaugurated in 1899 in Palazzo Valloni, not far from Piazza Titano. In 2001 it was transferred to its present-day structure, Palazzo Pergami Belluzzi.

4 – Piazza della Libertà and its statue

Further up, after a short walk you will arrive at Piazza della Libertà, the centre of the city of San Marino. Here you can visit the Palazzo Pubblico where the government of the country resides. In the square in front of the palace is the Statua della Libertà.

It has nothing to do with that of New York, of course, it is a statue in Carrara marble donated to the Republic of San Marino by Countess Otilia Heyroth Wagener of Berlin. This square is also perfect for a short break, if the weather is good you will enjoy a spectacular view of the hills, a breathtaking view that even in the evening has its reason why. 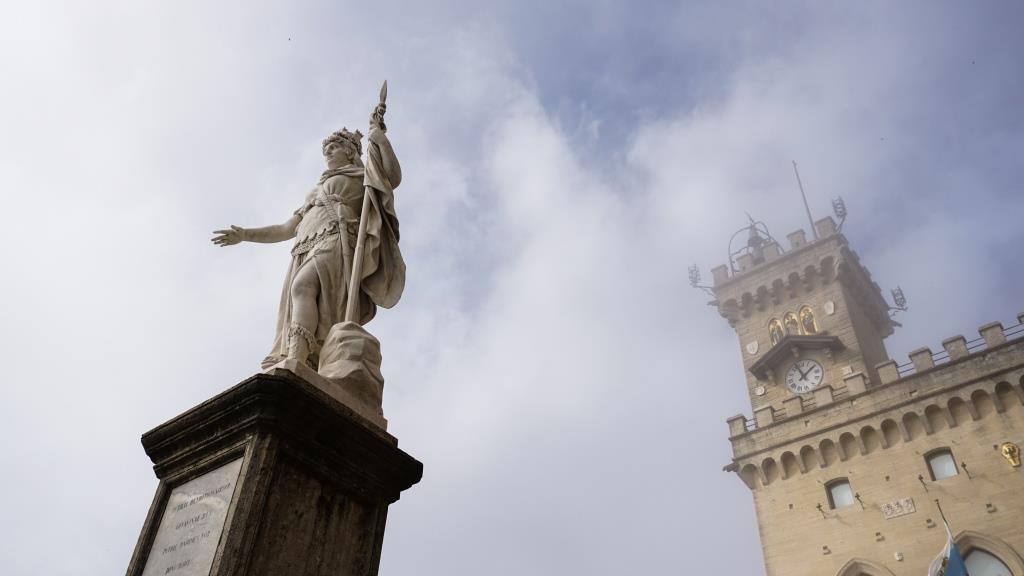 I loved how this palace, although not majestic, is particularly charming and well-kept. The Palazzo del Governo is the heart of political life and can be visited for a fee. You can access the beautiful Aula del Consiglio where the 60 councillors elected by the citizens every 5 years sit. 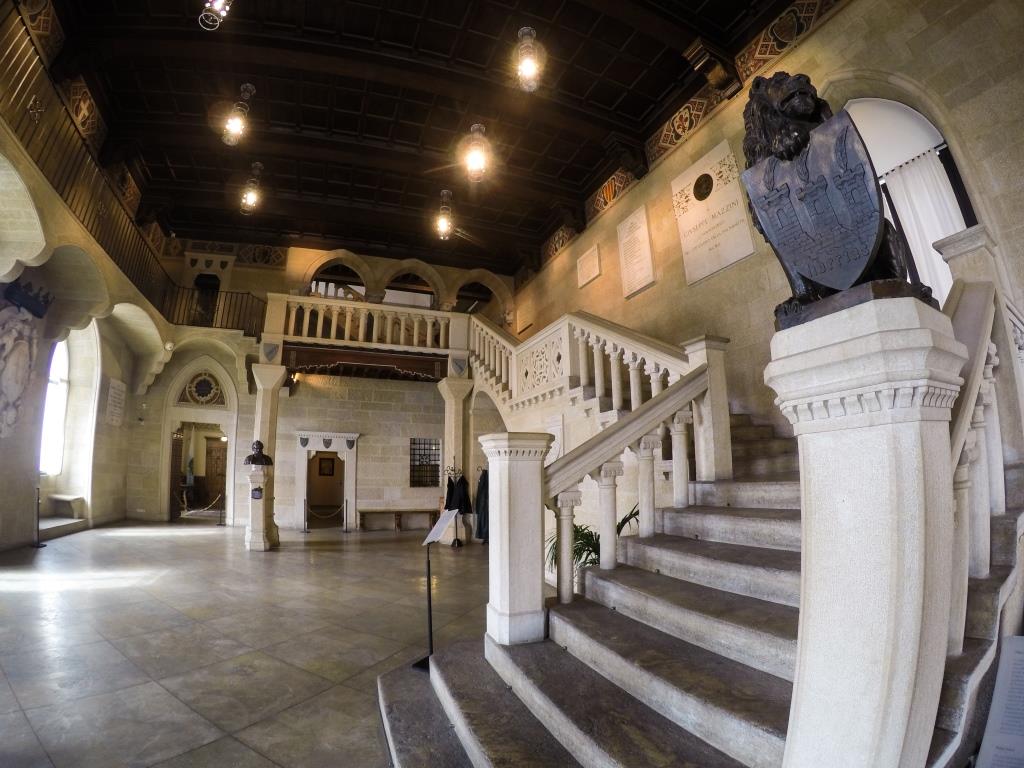 Various State ceremonies are also held in the Palazzo Pubblico and you can see the guard shifting which, from May to September, takes place every hour between 9.30 am and 5.30 pm.

I think that the Palazzo Pubblico is one of the things not to be missed in San Marino. It is very strange and bizarre to be in the place where the fate of an entire state is decided. 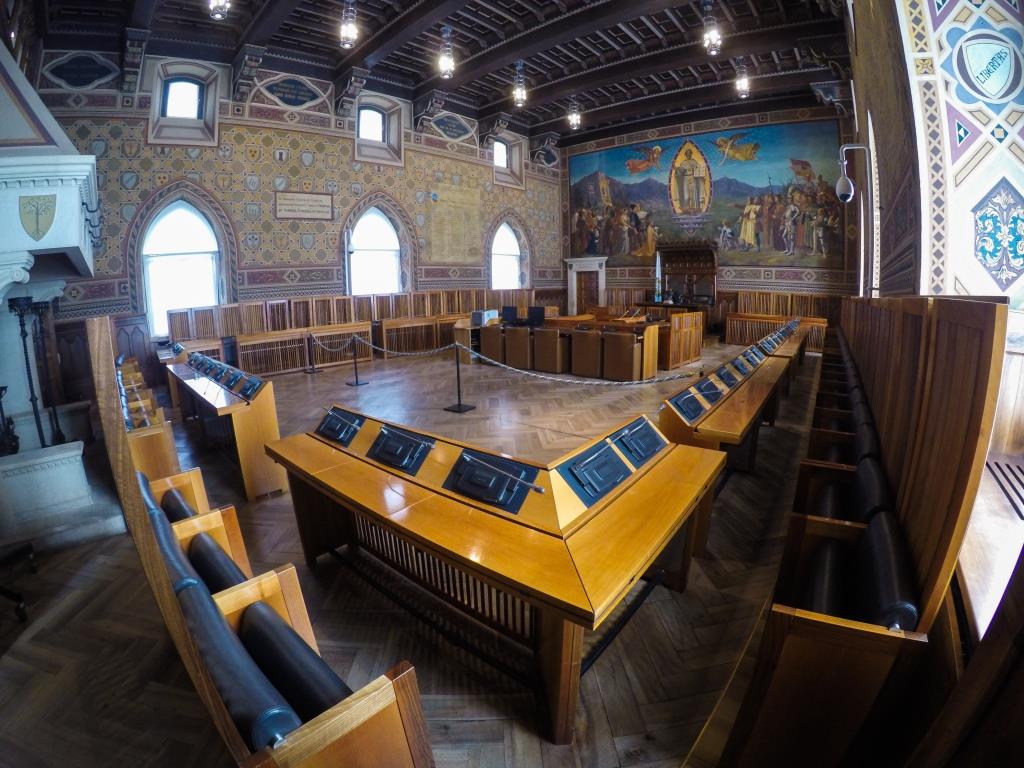 It is the core of religious life in San Marino and if you visit the city don’t forget to visit it. I am not the best person to describe the artistic aspects of this important place. I suggest you to visit a web page where you can satisfy your curiosity. You can find more information on  Visit San Marino official website.

6 – The cable car and panoramic viewpoints

The cable car is only a few metres from Piazza della Libertà, every 15 minutes it connects the P11 car park to the city centre. I think it’s a nice way to reach San Marino. The whole area around the end of the cable car is equipped with panoramic viewpoints, it is completely free of buildings and offers an incredible view.

7 – The three towers and the witches’ path

The towers protecting the city represent the most beautiful area, in my opinion, of San Marino. Every time I climb up to fortresses of this kind, I always wonder how they built them. They were built in such impervious areas that it is difficult to even imagine it. Hundreds and hundreds of years ago they were built and have been important landmarks ever since. First from a military point of view, now as symbols of San Marino.

The two main towers to visit are the Guaita and the Cesta. The Montale tower is almost isolated and structurally different from the other two. Looking out from these two towers, I asked myself the umpteenth question that recurs in this situation: who had the guts to attack San Marino, considering the unassailable position of Mount Titano?

I always ask myself this in front of these fortresses, yet the territories are rich in them and many battles have been fought.

Back to the towers. The Guaita tower is also called Rocca Maggiore. The first residential settlement of San Marino was built around it. It was a very important point for the defense of the city. Given its 360-degree view of the surrounding territory, it was fundamental to spot potential enemies on the horizon.

A caretaker lived in the fortress and had to watch over the territory. In case of danger he would ring the alarm by ringing a bell that is still used today to announce meetings of parliament or other government meetings.

From the Guaita tower the witches’ path begins, a very suggestive path that leads to the Cesta tower. It stands on the highest point of Mount Titano and represents the second point of defence of San Marino. In the past it was used as a prison, now there is a Museum of Ancient Weapons. It is very interesting to find out how some weapons originated from tools that were first used in the peasant world.

You can reach the Montale tower through a path set in the vegetation, unfortunately it is not open to the public and therefore you can just take a picture of it.

It is located near the end of the cable car and, as its name says, in the past it was used for the extraction of stone used for the restoration of the Palazzo Pubblico. Every year on September 3rd the Palio dei Balestrieri takes place.

How to visit the Republic of San Marino

The area of the State of San Marino spans over 61 square kilometers, an important portion of territory. The most visited place is of course the centre of the city where you can find almost all the attractions offered by the country, including the government itself whose headquarters is the Palazzo Pubblico in Piazza della Libertà.

Reaching the fortified village on Mount Titano and therefore the city center is very simple, the directions are clear and there are several parking lots where you can leave your car.

I highly recommend the P9 car park which has affordable rates and allows you to park near the Porta di San Francesco, the main entrance. The second option is to use the panoramic cable car near the P11 car park, in this way you will have the possibility to combine the entrance to the city with a panoramic view of the hills below.

San Marino really struck me and I had the pleasure to visit it on a particular, almost mystical day. The city of San Marino, as you know, has been fortified on Mount Titano and it often happens that clouds envelop the mountain but do not cover it to the top. The area of the three towers remains clear in the sunlight and this gives a spectacular view of a sea of clouds, just like the view from the plane’s window.

Another thing that I liked is that all the things to do in San Marino are practically in sequence. The main road, through which no car can drive, starts at the Porta di San Francesco and ends at the Montale Tower, the third and last tower, the farthest one. Just follow this path and you will enjoy all San Marino.

If I could go back in time I would have visited San Marino much, much earlier. It is a day trip that is well worth it. You have to experience it calmly, enjoying every view, and if you are lucky enough to see it on a day with low clouds (as I have), well, it will be exceptional!

The Pyramids of Zone on Lake Iseo in Italy

Borromean Islands in Italy : by Ferry on Lake Maggiore

South Sardinia Beaches: 5 of the Most Beautiful