In a simple day it is possible visit Brescia quietly, I am talking, however, only about the historic center of Brescia. It will leave you pleasantly impressed. Not to be missed is the castle of Brescia, a very important symbol of both the city and the whole country, ever heard of the Lioness of Italy?

Here, you will find yourself in a place where 10 days of history were written in 1848, an indelible history that still characterizes the soul, perhaps a bit rough, of the typical Brescian.

But let us now see the two itineraries I recommend. In case you have only one day at your disposal, the classic one is the most suitable. In case you spend several days in and around Brescia, then the alternative one could also be an interesting and original solution!

If you want to take a “logistically optimal” route, the ideal would be to devote the morning to the squares; Piazza Loggia, Piazza Duomo and Piazza Vittoria will welcome you with their elegance and history. They are very close to each other, you will be able to get from one to the other in no time. If you want to read some more information about these squares, I have described them in depth in the post: What to see in Brescia, my city!

My advice is to enjoy them at your leisure, perhaps stopping for an aperitif in Piazza Duomo.

In my opinion, one very positive thing about the historic center of Brescia is that it is within walking distance. Although it is a major city, sitting down to enjoy a good pirlo in any of the bars in Piazza Duomo, you will be pervaded by a strange calmness that is not usually felt in other cities. This is one of my favorite aspects of Brescia.

The classic itinerary proceeds with a visit to Roman Brescia that is, Piazza del Foro and the nearby Capitolium with its columns rising under the Cidneo hill. Near Piazza del Foro you can also find Palazzo Martinengo where Ugo Foscolo spent part of his existence. Continuing on Via Musei beyond the capitolium, on your left you will find the splendid Santa Giulia complex with the museum of the same name that always hosts beautiful exhibitions.

You could devote the rest of the day to discovering the Brescia Castle spending a few carefree hours in the midst of history. 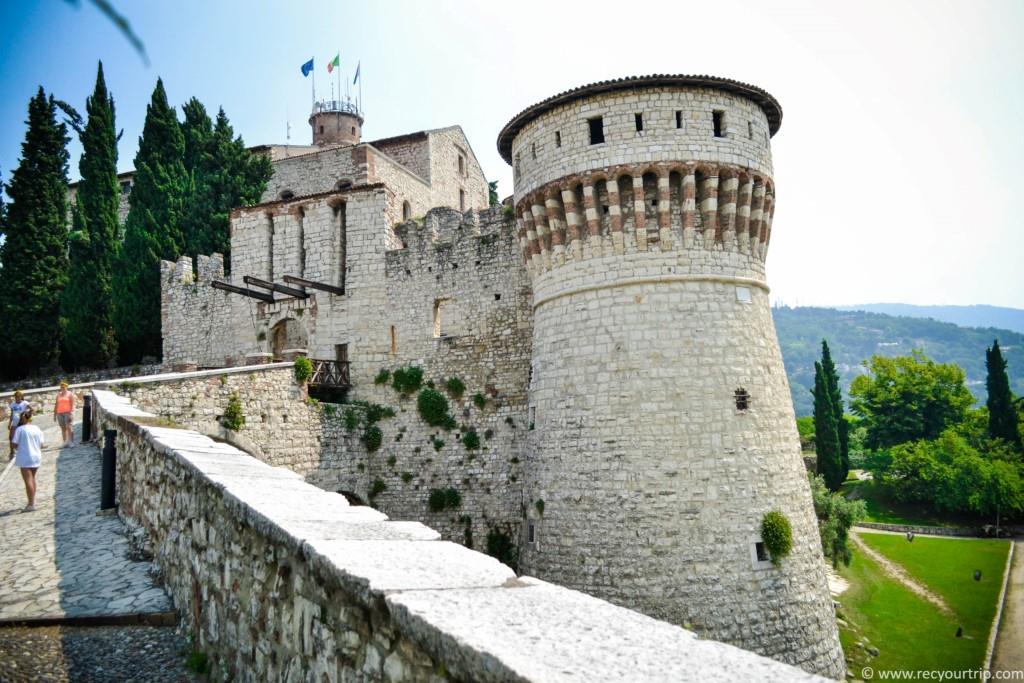 It is a little gem overlooking the city from above, the strange thing is that often people visiting Brescia are not aware of this important place in the city. It will surprise you!

Finally, to end the itinerary, at sunset the best choice would be to go back to Piazza Duomo to have a nice pirlone to end the day like good Brescians.

Alternative itinerary for Brescia: the towers

If, on the other hand, you want to take a different route, I will point you to one that is very particular and definitely alternative.

Few people know about it and I myself was not aware of it. In Brescia long ago there were as many as 100 towers, each with different functions, from bell tower to defensive tower. They are completely incorporated into the fabric of the city, and so as you walk through the narrow streets of downtown Brescia, you can discover them one by one. 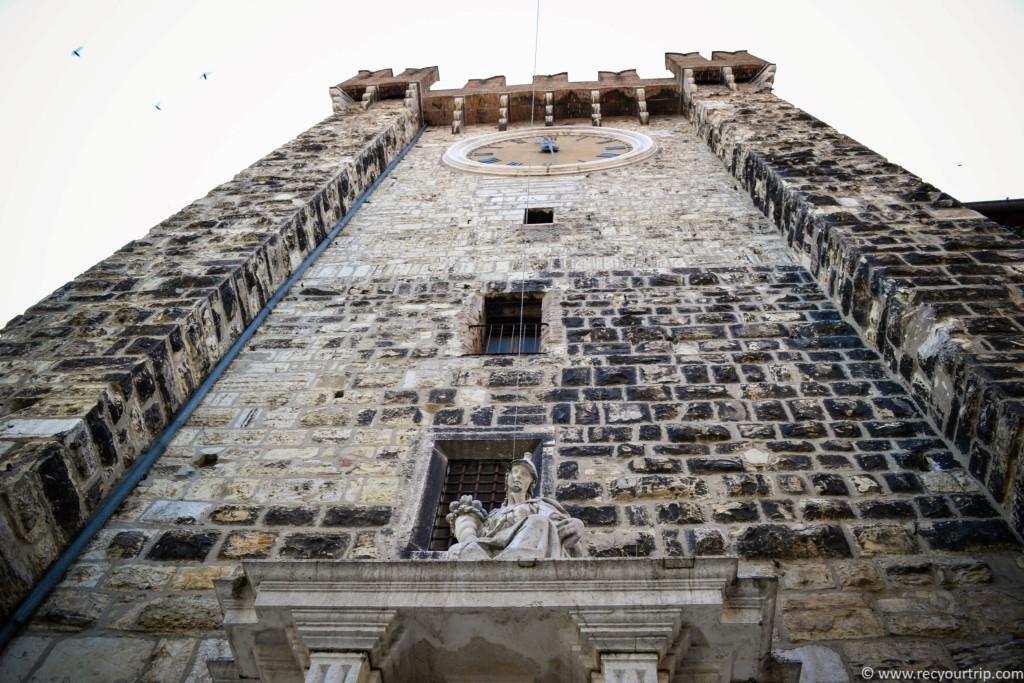 Some are remarkably well known and are often used as landmarks, just think of the Pallata Tower located at the intersection of Via Pace and Corso Mameli. This tower is well known, so much so that it is often simply called “Pallata”.

Two possible functions of this tower have been speculated: a possible defensive reinforcement tower or a structure simply connected to the walls. Either way, from 1300 onward it was used to guard the treasury of the municipality. 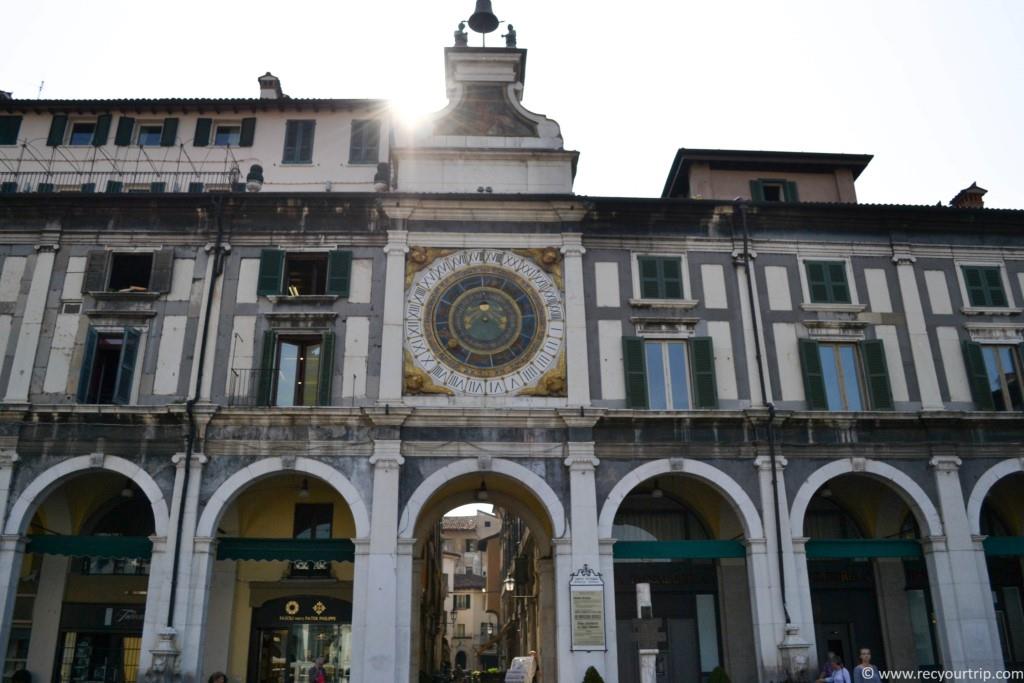 How not to mention the Clock Tower in Piazza della Loggia, I already told you about it at the beginning of the post, remember? It is one of the most striking towers in Brescia. It is positioned right on the east side of the square, at the beginning of Via Cesare Beccaria. In the context in which it is inserted it loses the characteristics of the classic tower. There are many peculiarities of this symbol of the city, first of all the fantastic clock in two dials, one facing the square and the other facing Via Cesare Beccaria. Secondly, on its top are the “Macc de le ure”.

Looking at the clock tower, to its left, at the end of the arcades you can see the Porta Bruciata Tower, which is very important as it was the access way to the heart of the city for those coming from the Capitoline Temple. In 1182 the tower acquired the adjective burnt following a fire that devastated a large part of the city. 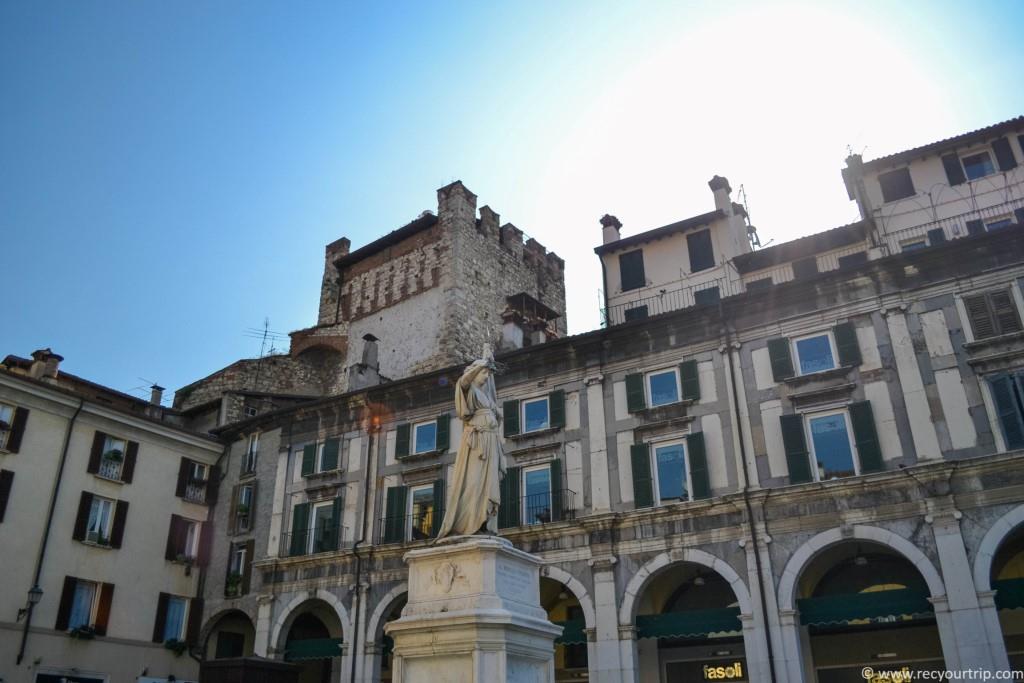 It is worth noting that the area behind both this tower and the clock tower is a very beautiful area characterized by small streets and full of quaint restaurants where one can dine.

Another very important tower to see in Brescia is the Tower of Hercules located on Via Cattaneo. If you look at the map it is just below Piazza del Foro. This tower represents a typical tower used as a stately home. Complicated with the fact that there is a club at its foot, if you were not pointed to it you probably would not spot it on your own. One detail related to this tower: it seems that in 1258 Ezzelino da Romano chopped off its top as a mockery to the city of Brescia after its conquest, it is now about 17 meters high.

These are only four of Brescia’s towers. Just to name a few others, near Piazza Duomo you can see the Poncarali Tower and the Torre del Popolo. The old cathedral itself had a tower that unfortunately collapsed in the early 18th century. In Piazza Vittoria you can see more recent towers such as the Ina Tower and the Revolution Tower.

The castle cannot be missing from the roll call, how is it possible to talk about towers and fail to mention the place where towers should be everywhere. Well, here you will find the Mirabella Tower, which over time took on a strong religious connotation. There are indeed many towers in the city area and they are definitely worth a visit, keep in mind the possibility of this alternative itinerary. Even the classic itinerary allows you to see several of these towers because most of them are close to the three main squares.

Some places to include in the Brescia itinerary

Up to this point I have mentioned all the places you must see in a day in Brescia, if you should then have more time to devote to the city you can entertain yourself with some shopping along the arcades of Via X giornate continuing along Corso Zanardelli or Corso Palestro. 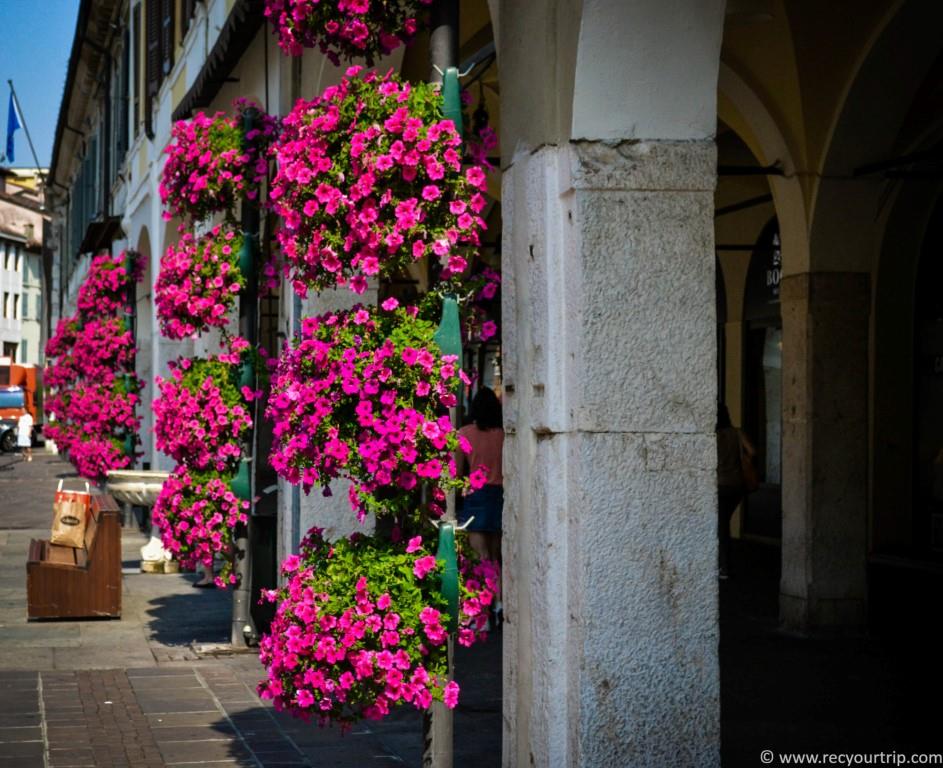 And if you are in town in the evening as well, try a trip to the Carmine. The area near the northernmost part of Via San Faustino has been redeveloped for a few years now. There are numerous pubs, clubs where you can listen to music while having a drink; in short, it has become the hub of the city’s nightlife. Or, in case you are not interested in this kind of entertainment, why not watch a play at the Teatro Grande, it is really phenomenal, you will not regret it. Be careful, however, to check in advance if there are any shows scheduled.

And so here we are at the end of this article where I have tried to talk and explain to you as best as possible about my city. I hope it has intrigued you and made you want to drop in on this wonderful reality of Northern Italy.