Home ITALY Brescia, Italy, what to see in my city!

As some of you might know, I’ve been blogging for a couple of years now, so I think it’s high time I wrote a post about what to see in Brescia, the city were I was born and bread.

As I’ve written in some of my previous posts, I believe that too often travel bloggers tend to  rite about their experiences in foreign countries, in far-away, remote cities or places which take hours or days to reach. What happens is that we sometimes forget to talk about our places — those cities, towns or villages we’re immensely proud of because that’s where we were born, where we grew up and where our most intimate memories are held.

And that’s exactly why I decided to write a post about the things to do in Brescia in Italy.

This is an article thought especially for those tourists who need information to organise their itinerary around this gorgeous city. 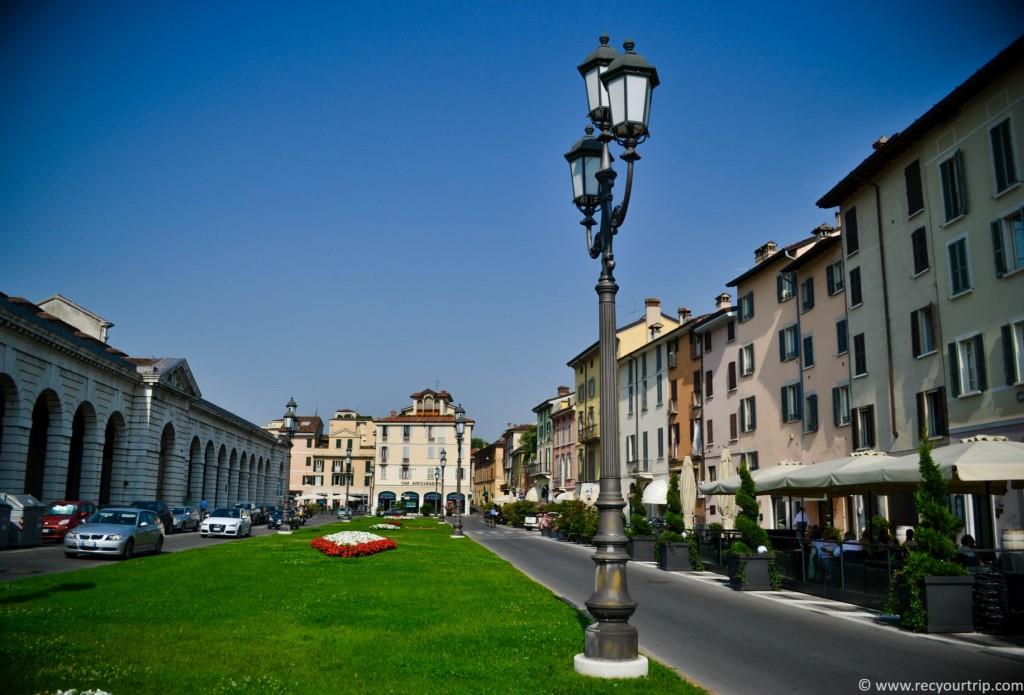 It’s true. Being very close to many must-see cities such as Milan, Verona and Bergamo, Brescia and its attractions get sometime overlooked as a consequence. Having said that, I was extremely happy and proud to read that, since 2015, Brescia’s tourism has grown considerably with visitors numbers up to 12%.

This is probably a positive consequence of a great administrative and touristic management of the city. Unlike many other popular touristic destinations in Italy, if a visitor decides to go for a drink or meal in any of the many bar/restaurants in the city centre, even right in the main square called “Piazza del Duomo“, they won’t get ripped off at all.

Brescia is a truly marvellous city, but its inhabitants already know it. It’s high time we explained to its future visitors how many beautiful things they can see, do and discover in our city, don’t you think?!

Where to stay in Brescia

If I have to recommend a place to sleep in Brescia, that’s definitely the city centre. Living the city in the evening and then returning home to some nice hotel or B&B a few steps from the main squares, is not bad.

To search for accommodation where to stay in the centre: CLICK HERE and choose from one of the hotels/accommodations in the areas near Piazza Duomo/Loggia/Vittoria.

What to see in Brescia: the squares (piazza)

Let me start by saying that Brescia has three main squares, all of them at only a short distance from one another. Secondly, I would say that we need advice on where to sleep in Brescia, and in this case I can only tell you: downtown! -> CLICK HERE and view all available hotels in the historic centre

A lovely and appealing Renaissance square, surrounded by Venetian style buildings. At one end, the Loggia housing the municipal administration, whilst at the other end, the stunning Torre dell’Orologio (the Clock Tower) topped by the “Matti delle Ore” (or “The Hours Madmen”), two tiny bronze statues hitting the bells every hour.

Loggia square can be considered as the very heart of the city of Brescia, where people meet up and socialise, especially on the day of “The fair of saints Faustino and Giovita”. This is the largest and busiest fair of Brescia, held each year on 15th February in honour of its two patron saints. 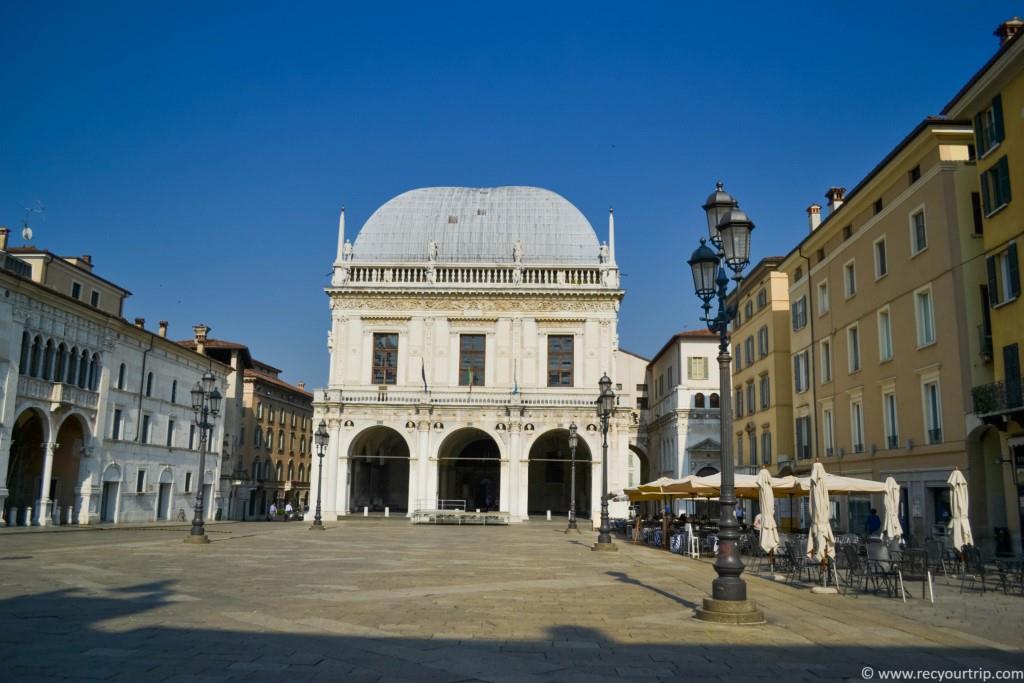 It’s really worth visiting the square during the market on Saturday as well as in summer, when a stage gets built in front of the Loggia, so as to host important musical concerts of famous Italian and international artists.

Despite the absence of a Duomo (or cathedral), it can be considered as Brescia’s most important square.

On the 28th May 1974, Piazza della Loggia was unfortunately bombed by a right wing group — to remember the 8 people died and the more than 100 wounded in this sad carnage, a commemorative stone was placed just below the Torre dell’Orologio. If you want more information about the bomb of Piazza della Loggi, you can read this article con Wikipedia.

The square was built as an homage to Pope Paul VI, born in Concesio, a town in the province of Brescia. The name with which it is mostly known though, is “Piazza del Duomo” because of the presence of not only one, but two cathedrals, both incredibly stunning.

The massive New Cathedral is surely the protagonist of the square and, just directly adjacent to it, sits the Old Cathedral in all its ancient beauty. 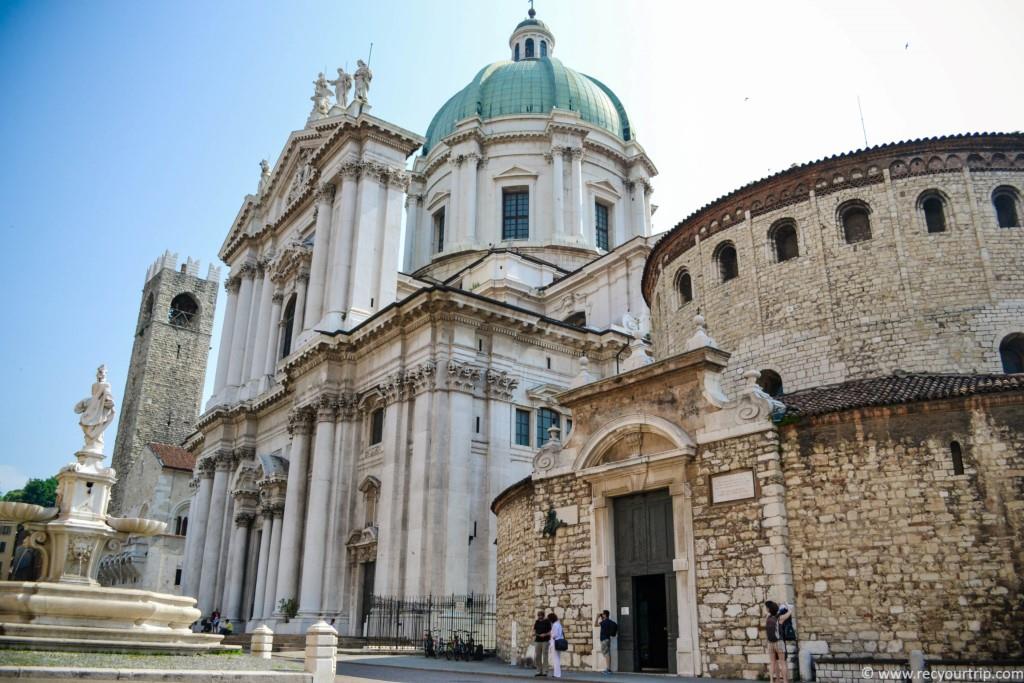 From a historical point of view, this square became relevant starting in the 4th century AD. Indeed, it is during Medieval times that two different paleochristian cathedral were built.

As I’ve already written before, the peculiarity of Pope Paul VI square consists in housing two
different cathedrals. This is due to the fact that there was a cathedral especially built for summer and another one for winter. As a matter of fact, the Old Cathedral, built in the 11th century on the site of a prior church with a basilica layout, still hosts the rests of an hypocaust — one of the most ancient Roman systems of underfloor heating. The construction of the New Cathedral, instead, began in 1604, but it was not only until 1913 when the largest Roman Catholic church present in Brescia was inaugurated. 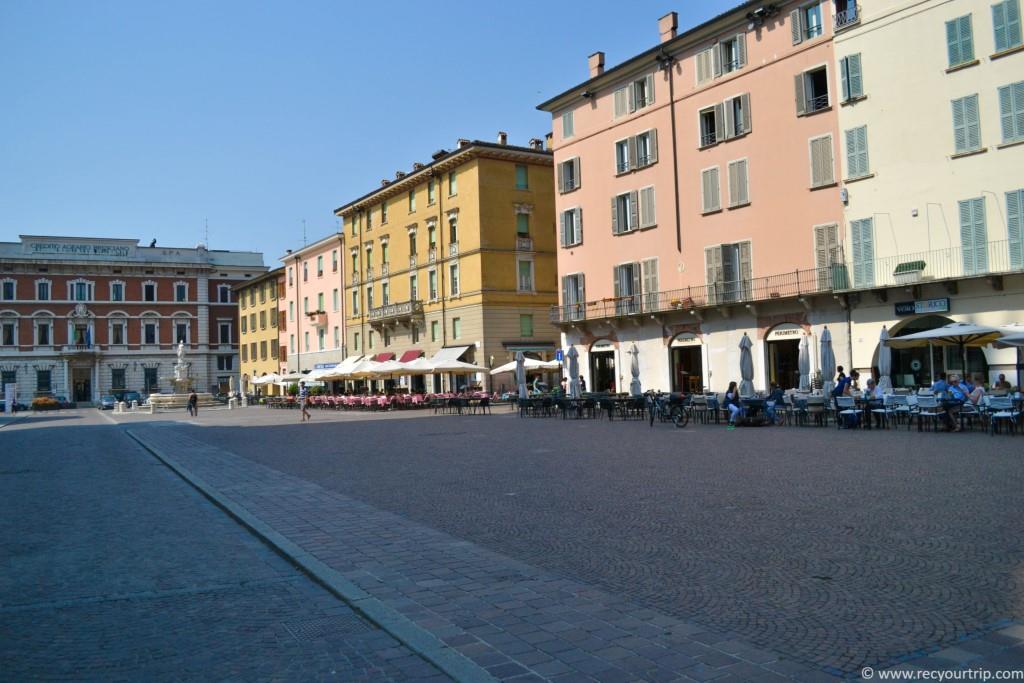 I can personally say that is a gorgeous square to which I’m very emotionally attacched.

It was closed to traffic only a few years ago and, since than, it has become one of the favourite places for people to spend their evening, especially during those gorgeous and warm spring and summer days. If you decide to stop at a bar in this square, please remember to order a “pirlo”.

The “Pirlo” (called “Spritz” in other cities) is a common wine-based cocktail served as an aperitif in the North of Italy. The drink is prepared with 1/3 Prosecco wine, 1/3 Aperol or Campari (bitter liqueur), 1/3 sparkling mineral water and a slice of orange as garnishment.

Should you go for a “Pirlo” with Aperol or Campari? The choice is yours — try them both if you wish and if you’ve got high tolerance for alcohol! It is impossible to leave Brescia without having drunk a “Pirlone”. It’s a must-drink guys — you’ve been warned!

Piazza Vittoria was built fairly recently in 1932, during the fascist era. In order for the constructions to begin, the ancient medieval quarter called “Pescherie” was completely razed to the ground. 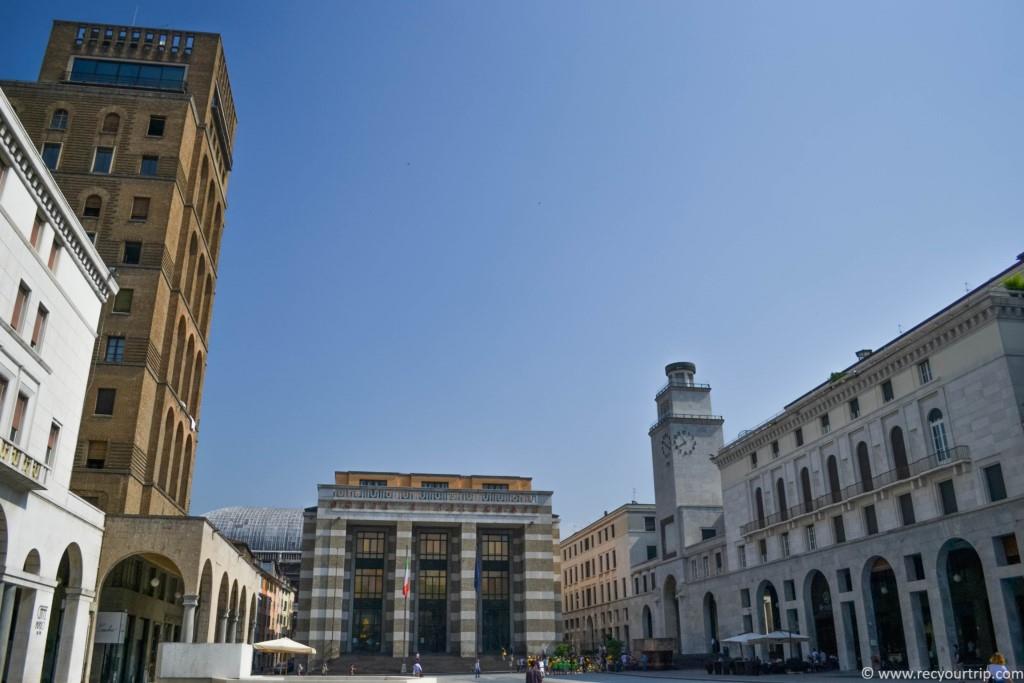 Because of its fascists “origins”, Victory square has often been a matter of many controversies and antifascist protests. Indeed, people saw it as a square to be ashamed of and thus began to hide or take away the majority of its onsite fascists symbols. Amongst them, the Bigio, a marble statue situated on the left hand side of the square, which was removed in 1945 and which still hasn’t been put back in its original place.

This square of Brescia has two important buildings: Palazzo delle Poste (the Palace of Post Office) and, on the left hand side, the Torrione (or Big High Tower), the highest tower in Europe back in 1932.

Victory square is also the starting point of what is known as the most beautiful race in the world — the Mille Miglia, a regularity race for classic and vintage cars which brings to Brescia thousands of car-lovers and visitors. Surely, the Mille Miglia (or Thousand Miles) represents one of the best chances to see Brescia at its best. 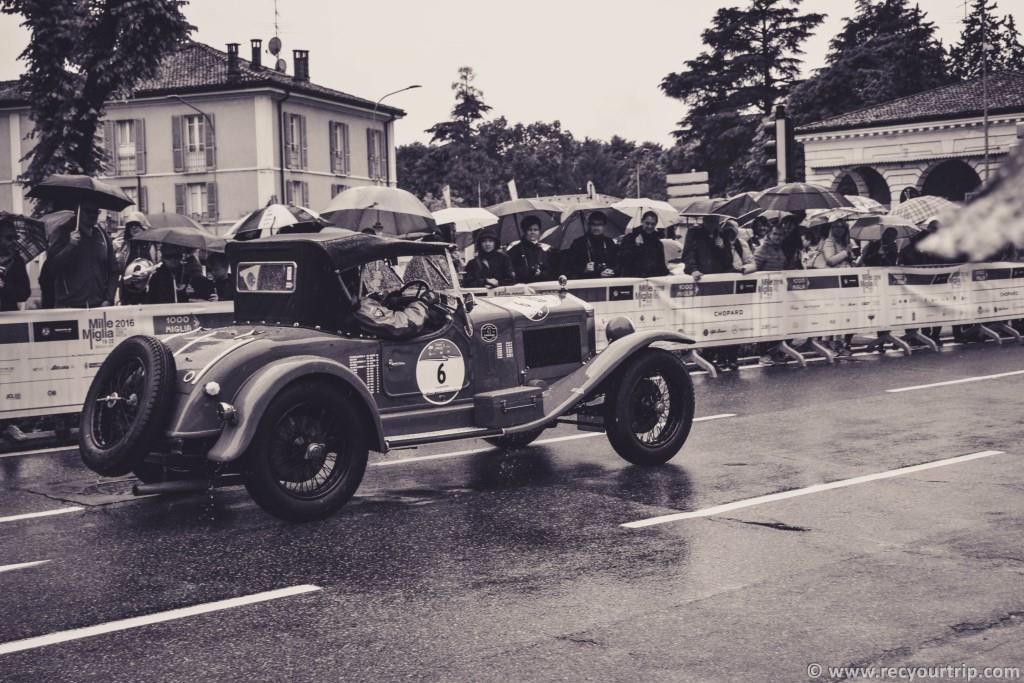 Apart from Loggia square, Pope Paul VI and Victory square, Brescia has other smaller gorgeous squares which are well worth a visit.

The most ancient square in Brescia and thus, one of the most important historically and culturally too. It was, back in Roman time, the centre of both religious and political power.
From here, tourists can marvel at the magnificent Capitolium Temple, built by Vespasian in
74 A.D.

Situated near Victory square, this tiny, yet fascinating, square has been the site of a market since the 15th century. Because of its closeness to the three major squares of the city, it often gets overlooked by the tourists. The west side is dominated by Martinengo Palatini Palace, built in the 17th century and now housing the University Chancellor’s office.PIaz

This small square of Brescia can be easily reached from Loggia square. Walk north, along via San Faustino, until you get to the Church of Saints Faustino and Giovita, the two patron saints
of the city.

From a historical point of view, Tebaldo Brusato Square represents a very important square for Brescia. It is a bit further away from the city centre, but it can be reached by walking along “Musei street”. 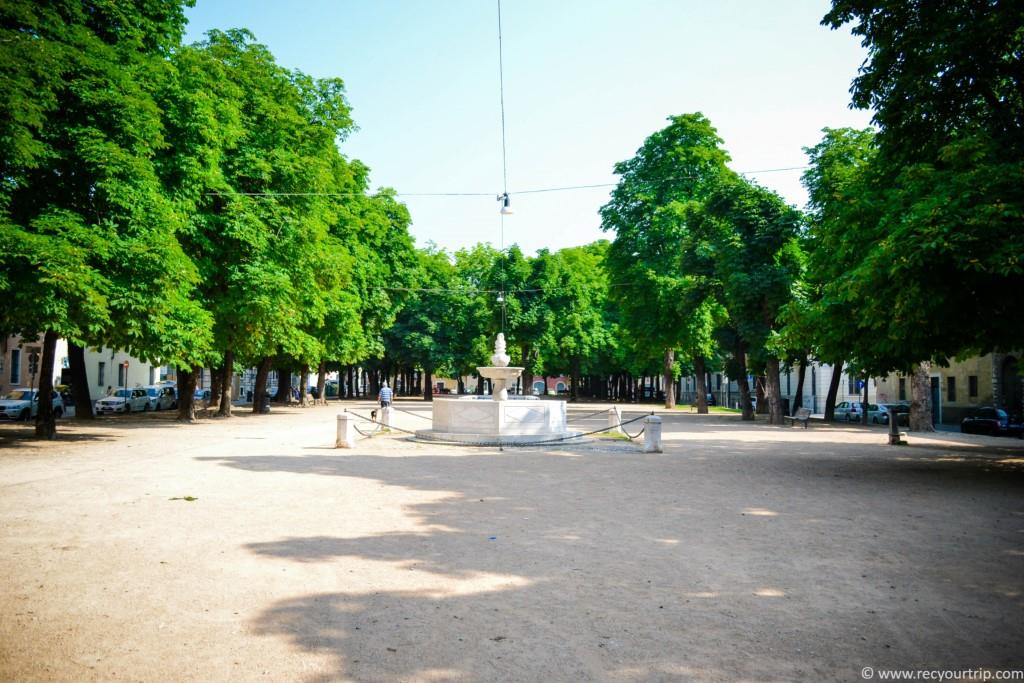 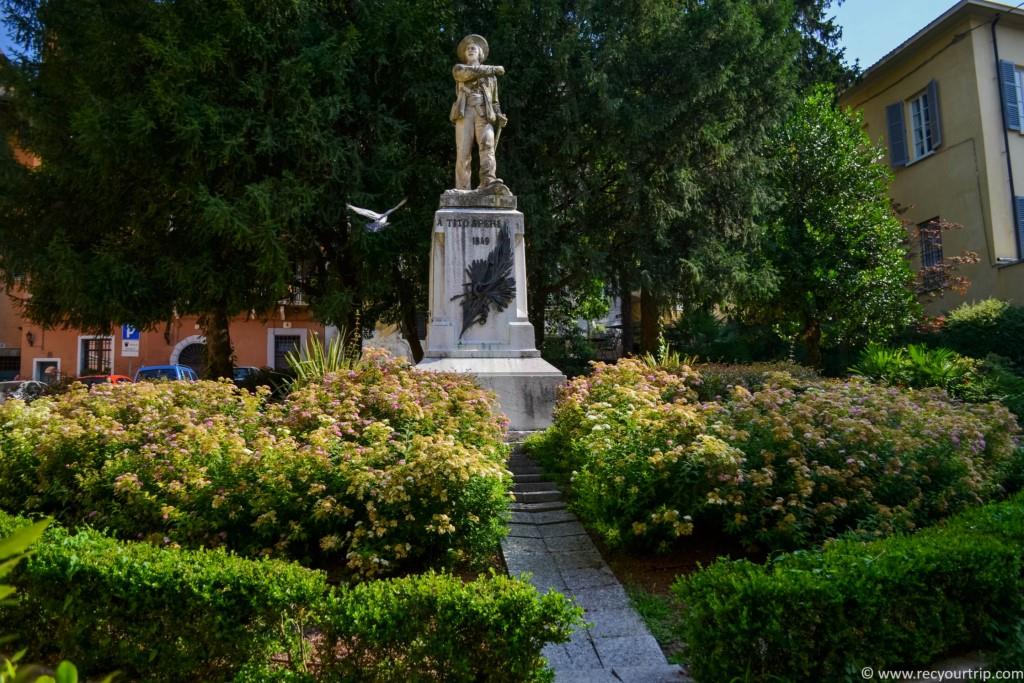 What to see in Brescia: Brescia under roman rule

In 89 B.C., Brixia, as it was called then, was recognised as city and its inhabitants received Roman citizenship. The past Roman presence is still highly visible in the temple, theatre and other buildings scattered around the city centre. Amongst some of the most interesting sites there are the Capitolium of Brixia as well as the Roman Forum.

To get to the Capitolium from the city centre, just walk along Musei street and, after only a few metres, you’ll be able to see the Roman temple — a true sight for sore eyes! On your right, instead, Foro square which was the centre of religious and political power back then.

The Capitolium, the Roman Basilica and the Roman theatre

The Capitolium is the most important archaeological site in Northern Italy. Partly restored with brown bricks during the 19th century, the temple consists of three cellae that still retains the majority of the original polychrome marble floors. 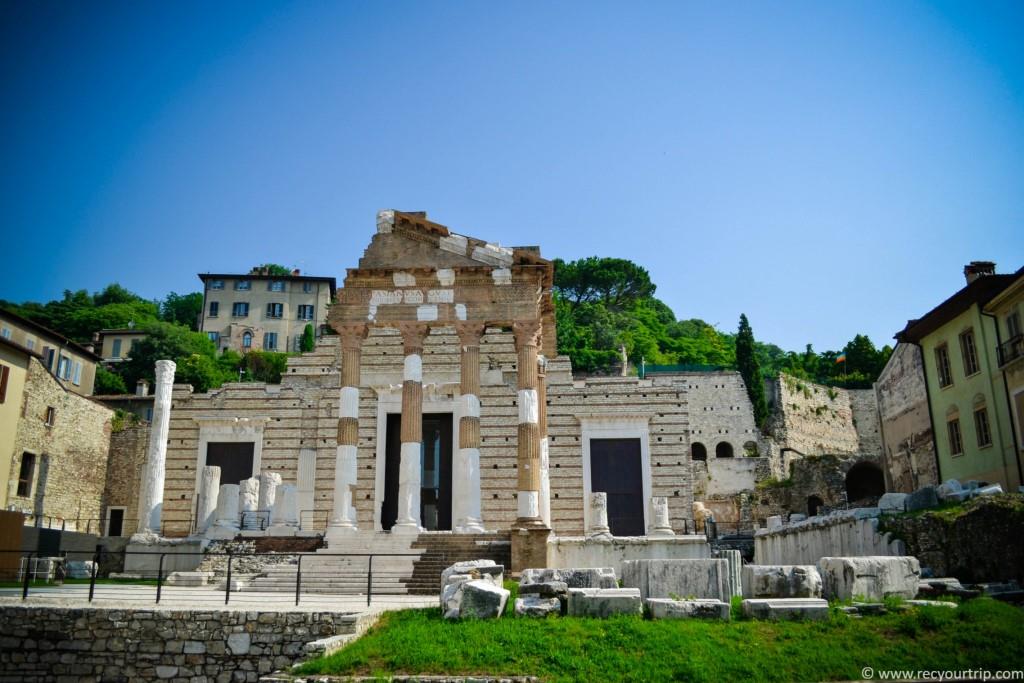 Immediately at east of the Capitolium, the rests of Roman theatre, whilst at south, the Roman Basilica.

Just on the corner between Musei street and Foro Square, the imposing Martinengo Palace, home to the noble family Martinengo Cesaresco since the 16th century. Today, this palace is a very popular and visited art gallery. The palace was the place where the famous Italian poet Ugo Foscolo met one of the many women he loved, Marzia Martinengo, who was at that time the owner of the palace.

Brescia’s castle and the Lioness of Italy

The castle is surely amongst one of the many must-sees in Brescia. Without doubts, Brescia’s fascinating castle represents the story of our city.and its importance is so central that I’ve decided to write an entire article dedicate to it.

If, as I hope you do, you’ll decide to spend a few hours walking up the castle and strolling around its marvellous gardens, please read my post “Brescia’s castle and the Lioness of Italy: a great source of
pride” where you’ll find useful information on how to visit it. 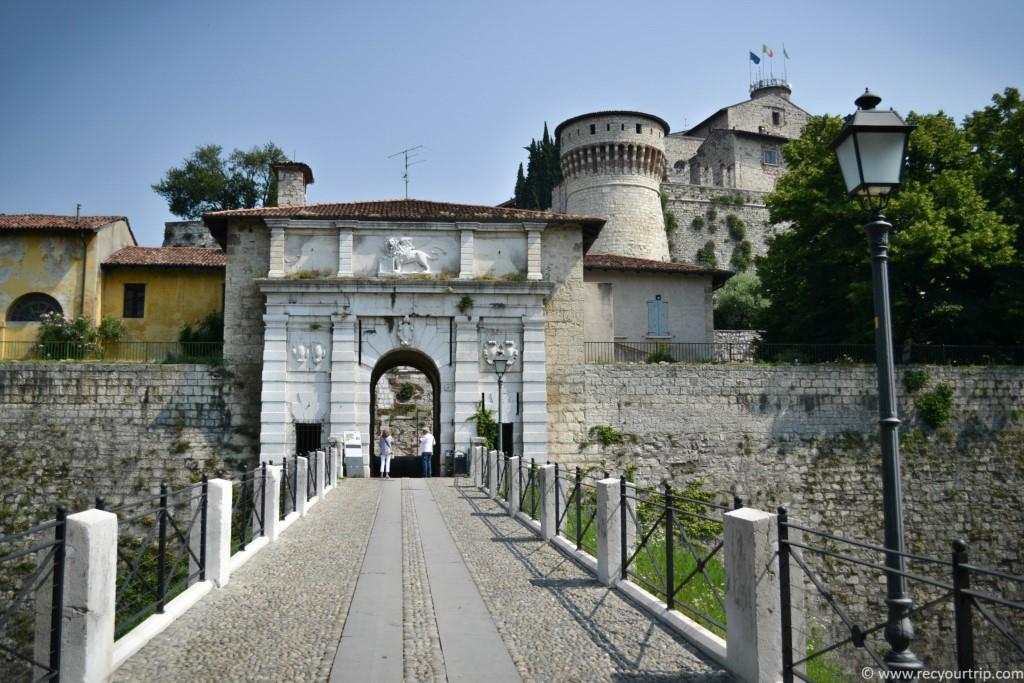 Recently reopened, after 9 years of closure, the Tosio Martinengo Art Gallery is a gem of the city that houses numerous important works. Not only that, these works are inserted in a museum with colored walls, each room, for a certain reason, has its own color. A beautiful museum that you cannot miss.

The Pyramids of Zone on Lake Iseo in Italy

Borromean Islands in Italy : by Ferry on Lake Maggiore

South Sardinia Beaches: 5 of the Most Beautiful