Home SPAIN Top 10 things to do in Santander in Spain

Although is less subsidised than the South Spain (for example Andalusia), the North of Spain is an area remarkably beautiful and extremely different from the rest of the peninsula. Cantabria is one of the smallest regions of Northern Spain. Protected by the Picos de Europa and lapped by the Bay of Biscay. There are plenty of places to visit in Cantabria. For sure, travelling to its fascinating capital Santander is one of the first things to do.

Santander is a very popular destination amongst surfers. It’s a city that can be visited in a day (unless you don’t want to walk for quite a bit). The historic center is small and concentrated, but the promenade that takes to the lighthouse and residential area is very long and enchanting. Leaving Santander without having first walked here is strictly prohibited!

Where to stay in Santander?

I would recommend two main areas where to find your accommodation: either in the city centre or, alternatively, on the coast near by the famous and gorgeous beaches of Santander.

The top 10 things to do and see in Santander

This time I will not give you a predefined itinerary to follow. I’ll give you simple suggestions on what to see in Santander and around its city centre.

1 – Discover the past of Santader city

Before visiting Santander in Spain you should know its past and the fact that most of its Old Town was destroyed by a great fire in February 1941. This led to major changes in the architecture of the city that is now rich in tall blocks of flats.

The fire started on a windy day of February in Cádiz Street and burnt the city for two full days. The fire was eventually put off around the 17th/18th of February by Santander’s firefighters. They were helped by those who came in help from the neighbouring cities. The consequences of the fire were catastrophic: the old city centre and the cathedral had been destroyed.

But this is not the only fire that struck the city.

Further back in 1893, a Spanish steamer carrying dynamite caught fire while it was docked at the city’s port. The flames and smoke attracted to the harbour a great crowd of people who were curious to see what was happening to the ship.

Despite being aware of the danger of the situation, the authorities did not evacuate the area. When the fire reached the cases of dynamite, the steamer exploded. You can well imagine the disastrous consequences – the crowd of spectators gathered by the ship died immediately while huge pieces of debris fell upon the nearby houses and buildings.

A year later, in March 1894 a second explosion occurred during one of the many missions that took place in order to remove the dynamite on the sea-bed. 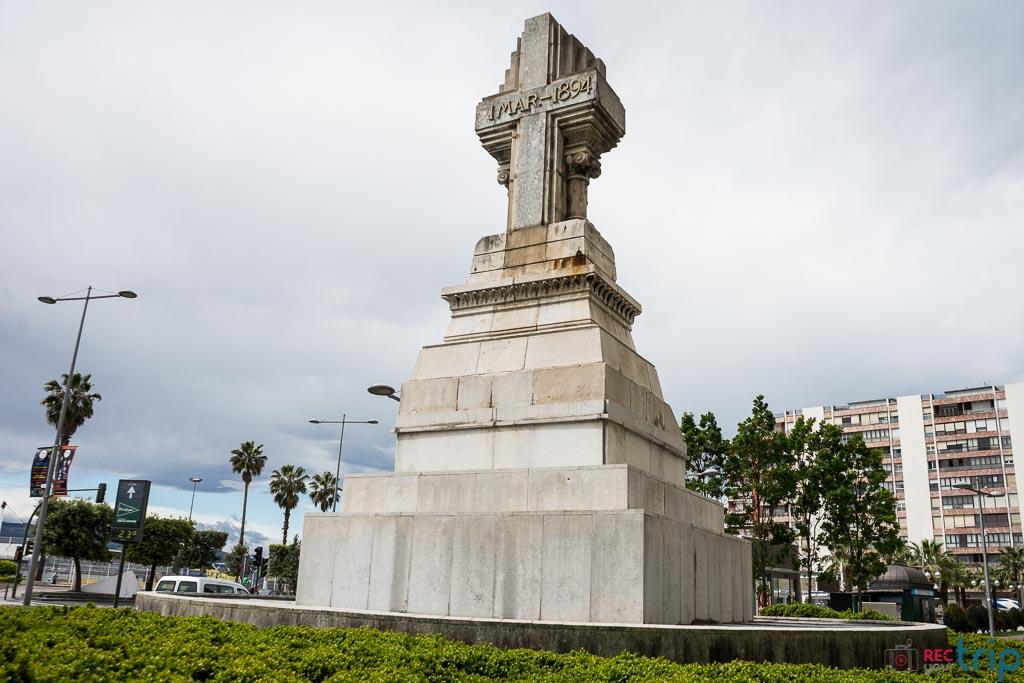 In front of the main harbour, the Memorial of Cabo Machichaco explosion commemorates the victims of this terrible tragedy.

Your tour of Santander should begin with a visit to the city centre. As mentioned above, there is little history to see in Santander due to the fact that the fire in 1941 destroyed the entire Old Town.

The city centre is not directly located on the Bay of Biscay, but it rather overlooks the Bay of Santander, a stretch of the sea sheltered by the promontory of La Magdalena. The historic centre is nearby the Catedral de Nuestra Señora de la Asunción. Here you can also find the city gardens (Jardines de Pereda) surrounded by the famous Banco de Santander and the modern Botín Centre designed by Renzo Piano and officially inaugurated in 2017.

The centre of Santander town is quite concentrated. Walking along the seafront from the Jardines de Pereda to the ferry pier, you will see two sculptures that are very important for the city.

The first one was built in memory of the terrible fire that struck the city in 1941. The second statue is closer to the pier and recalls the tragic explosions occurred in 1893 and 1894.

If you walk towards the inner part of the city, you can visit one of the most popular places in Santander. Its name’s Plaza Porticada, known for its square plan and classic arcades. Walking along the seafront towards the beaches of the north coast, you’ll see some interesting statues to your right. This sculptural composition is called “Los Raqueros” and it portrays those children that in the past were paid a tip to fetch the items that fell into the water. 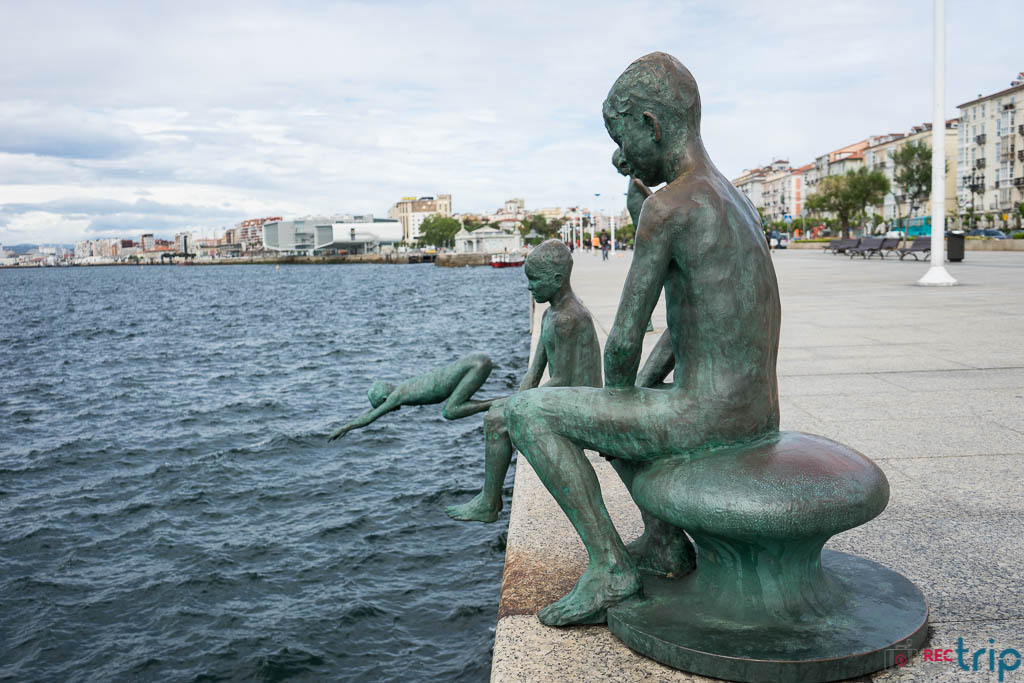 Visiting the Mercado de la Esperanza (Market of Hope) is surely one of the top 10 things to do when in Santander. In the many stalls of this peculiar market you can buy the best fish in the city. 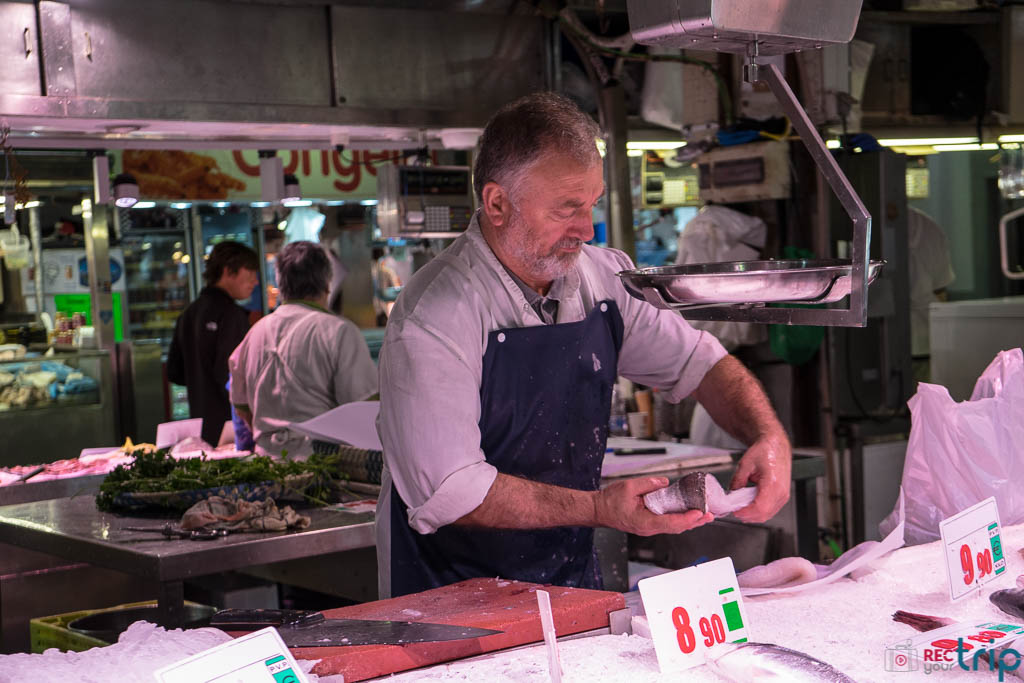 Indeed, the Market of Hope has been defined as one of the most excellent markets for fish in Spain. I guess I’d visit it every day, if only I lived in Santander!

Are you wondering what pinchos are? But that’s simple!

The pinchos are small snacks that accompany a glass of wine ordered at any bar or terrace in Spain. They are similar to tapas but the main difference is that pinchos are normally served with a cocktail stick “spiked” in it. The tapas, instead, are basically smaller sized portions of a particular dish, served in a plate and eaten with a fork. 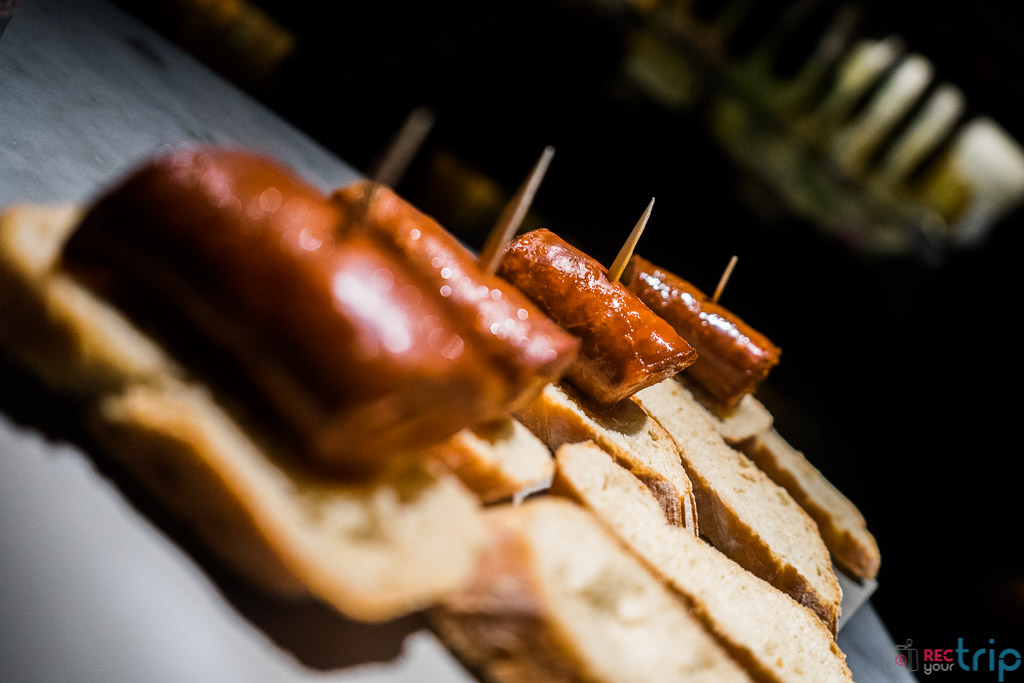 The pinchos are often served on a piece of bread topped with Spanish chorizo, ham or fish cooked in various ways. If you are visiting the city of Santander, don’t forget to grab a seat in one of the many bars, get a glass of wine and a binge on these delicious pinchitos! 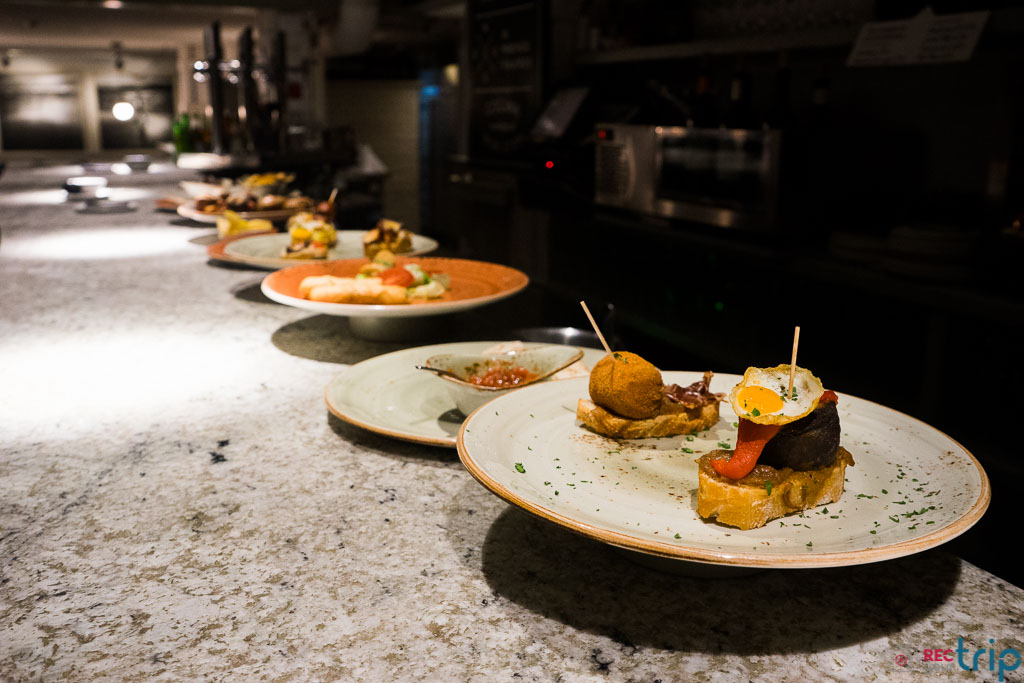 5 – Enjoy the Santander beaches and the sea

Santander’s residential area has recentely grown towards the beaches and the Península de la Magdalena. If we have a look at the map, northwest of the Magdalena, we can see a series of beautiful beach coves.

Here you can find Playa del Camello, a tiny beach with its characteristic giant cliff. This beach takes its name from a small rock that looks just like a camel. But, because part of it has been eroded by the waves and wind, I guess you’ll have to make a little effort with your imagination!

If you keep walking on the seafront, you’ll eventually get to Playa El Sardinero, Santander’s main beach. During the evening, this beach is crammed with people doing sports, walking their dogs or drinking a beer with their friends while looking at the sunset.

6 – Surf on the coasts of Santander

As I’ve already mentioned, Santander is one of the most popular destinations amongst surfers. Indeed, in this city, surf lovers can find plenty of beaches where to have fun. One of the most known beaches for practicing this sport is Playa de Somo. 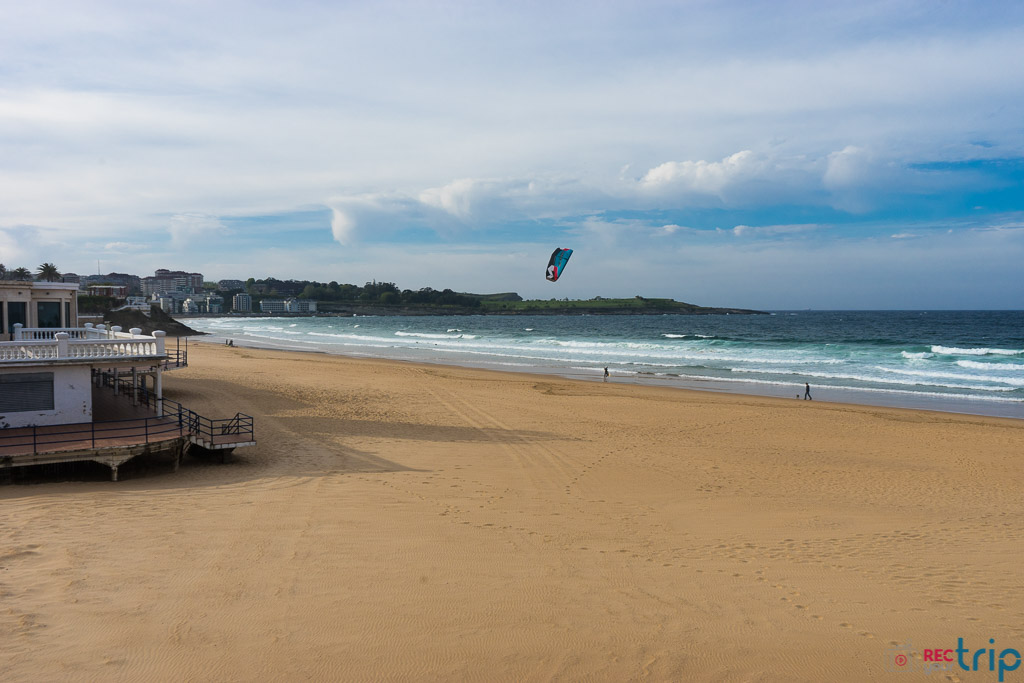 Apart from being the perfect place where to surf, the beaches in Santander are often affected by tides. You’ll notice that low and high tide alternate every six hours.

7 – Walk on the seafront of Santander

The seafront of Santander is very long and it offers beautiful scenery for a nice and quiet stroll. It takes about 40 minutes to get from the city centre to Playa El Sardinero. Can you get till the lighthouse? So, wear your most comfortable shoes, grab your camera and get ready to walk for a bit – it’s worth it, I promise!

8 – Get to Cabo Mayor Lighthouse of Santander

If you keep walking on the seafront, past the most crowded beaches in Santander, you’ll see Cabo Mayor lighthouse in the distance.

Small suggestion: if you want to get till the lighthouse, you’ll have to turn into an internal road. In fact, the beach ends on a ridge of rock that resembles a typical Scottish or Irish landscape.

Unfortunately, I couldn’t get to the lighthouse due to lack of time. But I strongly believe that it should be listed in the top 10 things to do in Santander.

Here you can find a map that better explains how to get to Cabo Mayor lighthouse.

Taking photos will be one of the best things to do in Santander and the major activities you will do while visiting Santander. Yes, because the coastal scenery of this beautiful city will make you want to snap pictures all the times. The sandy beaches, the loud breaking of the waves against the cliffs, the Península de la Magdalena or the Playa El Sardinero are going to become your favourite subjects – no doubts about that! 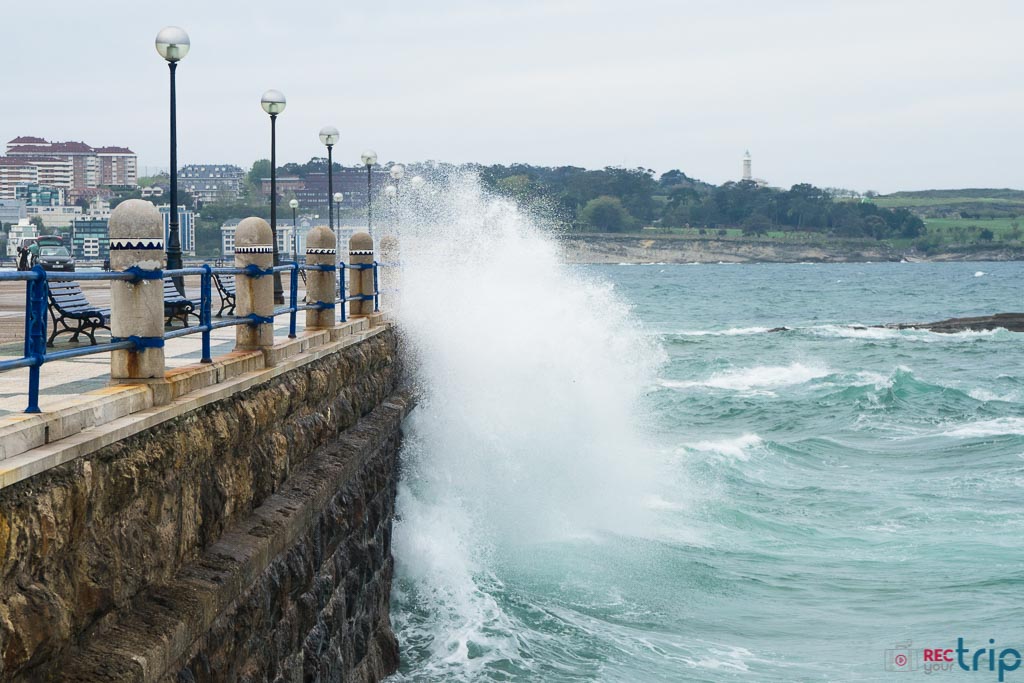 I can definitely say that the Península de la Magdalena and its fascinating palace are Santander’s real treat. 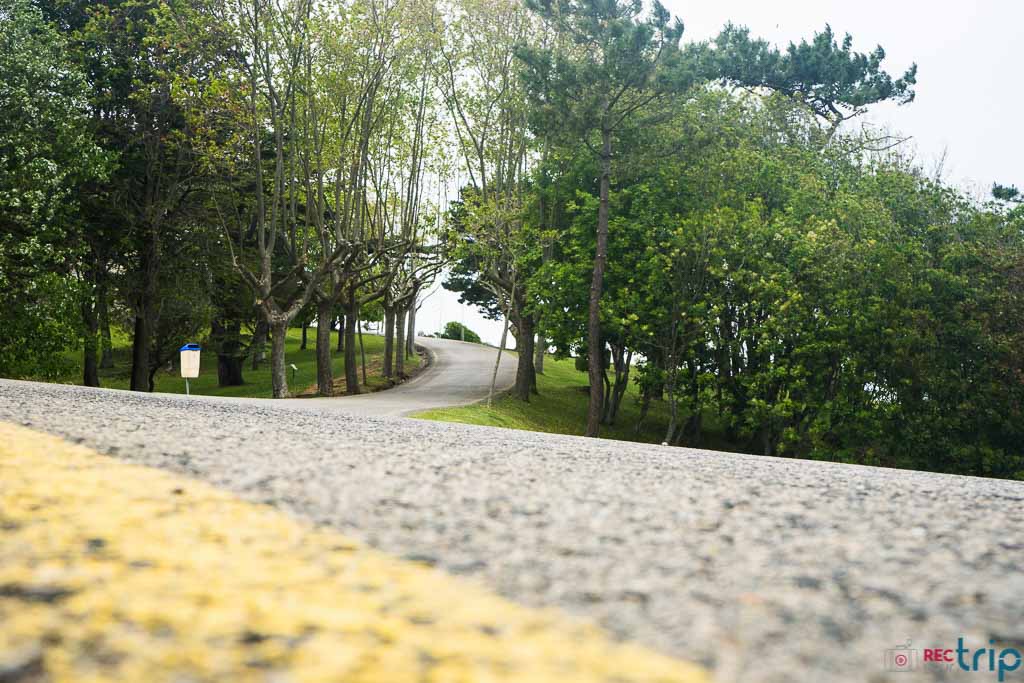 The park surrounding the palace has a surface area measuring up to 25 hectares.

Here the people can wander around, take a train ride tour around the peninsula or enjoy a nice stroll and the many panoramic views on both Santander’s coasts. Don’t you worry…the peninsula is not that big and in just 15 minutes you’ll probably have walked around it all. 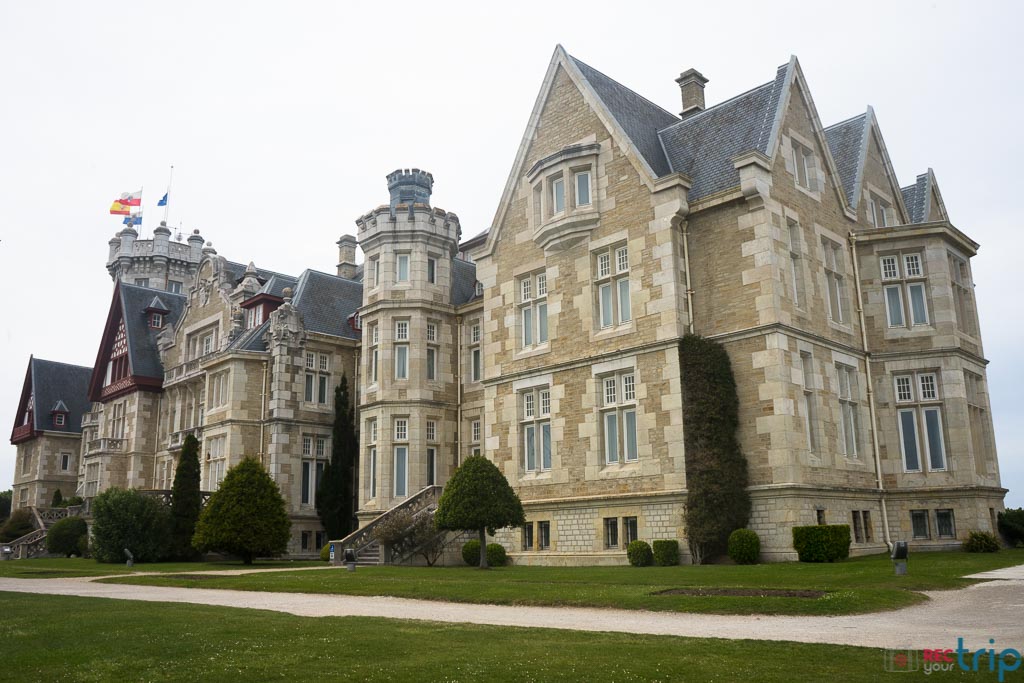 On the highest point of the peninsula stands the gorgeous Palacio de la Magdalena. It’s an ancient royal summer residence built at the beginning of the 20th century. This palace brought the attention to the beaches of El Sardinero which soon began to host new buildings, becoming the new residential area of Santander. Every year, around 60.000 people visit this palace which, in summer, becomes the venue of the International Summer University.

In conclusion, I’d definitely say that Santander has left a pleasant impression on me. Its seafront is truly gorgeous. If you like high waves, it surely is the perfect city for your summer holidays.

Todra Gorges: among the rocky walls of the Atlas Mountains

Brescia, Italy, what to see in my city!

Grottoes of Catullus in Sirmione on Lake Garda