Home MEXICO Cenotes in Mexico: What are they? Which one to se?

Cenotes, Mexico, white sand beaches, an immense jungle, freshwater lagoons and impressive waterfalls… If there’s something that cannot be missed whilst on a road trip in Mexico, it’s definitely marvelling at its spectacular nature. I’d say that here Mother Nature has really shown what she’s capable of. Visiting a cenote is one of the 15 best things to you can do in Mexico.

Well done you! What I would like to talk about in this post are the cenotes, which are undoubtedly the most unique natural beauties amongst the ones I’ve just listed.

What are the cenotes in Mexico and where to find them?

One of the main characteristics of the Yucatan peninsula is the fact that it’s literally packed with cenotes. When driving along the Mexican roads, you’ll soon realize how many road signs there are, which, if correctly followed, will lead you to a cenotes.

But what are they?  The cenotes are simply calcareous caverns which have formed during the centuries.

Billions of years ago, the Yucatan peninsula was actually packed with it. In particular, the land was covered with corals and fossils that contributed to the birth of a calcium stone conglomerated. During the ice age, the structure of the Yucatan peninsula slowly changed and the land grew in height above the sea level. The small drops of water coming from the melted ice contributed to the erosion of the calcium stones and the birth of these subterranean caverns and rivers.

One of the main peculiarities of the cenotes is that they are all connected for hundreds of chilometers. What you might not know is that in the Yucatan area there are no visible rivers. In fact, all the water streams are underground because of the land porosity. Thus, the cenotes are a marvellous places where to admire this incredible hidden ecosystem.

Another characteristic of the cenotes in Mexico is the presence of both stalagmites and stalactites which have formed thanks to the water drops that penetrated the land. 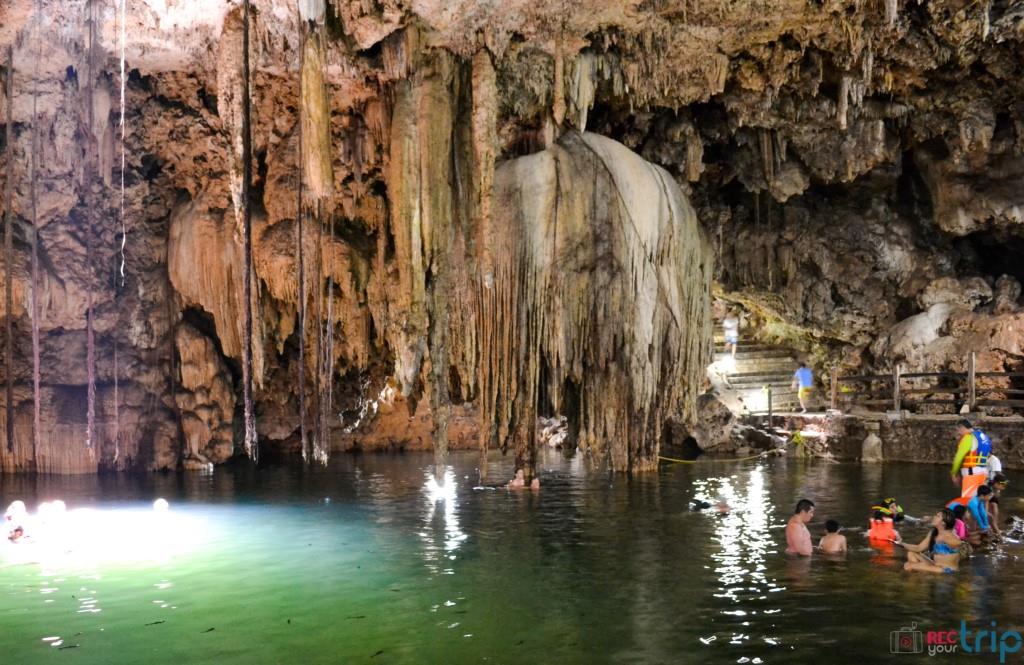 There are different types of cenotes in Mexico:

From my point of view, the most fascinating cenotes are the closed ones. Whilst entering them, you’ll feel as if you were in a mysterious environment: a subterranean puddle of freshwater illuminated by the beam of light that comes from the small cracks in the cenotes’s rock “ceiling”.

Why are the cenotes in Mexico so important?

As you might already know, the Yucatan peninsula was the homeland of the Maya civilisation. These people had a strong connection with the divine and with nature. The cenote, as well as being a fundamental source of freshwater, had a mystic value.

In fact, they were considered as sacred places: a sort of entrance door to a spiritual world. The cenotes were gorgeous spots in which to meet the Gods and honour them through human sacrifices. Many war prisoners and young virgins were cruelly left drowning in name of the divinities.

But that’s not all. In some recent cenotes explorations, valuable jewellery and cloths have been found. Probably both of them were used during the human sacrifices and thrown in the water to further honour the Gods.

What to do in a cenote

Surely, the cenotes are incredibly charming places. As soon as I entered one of these caverns, I had to stop in order to admire the marvellous surroundings.

For somebody that has always dreamt of becoming a geologist, just like me, this was a real paradise. Unfortunately, I ended up being a telecommunications technician…but that’s another story! 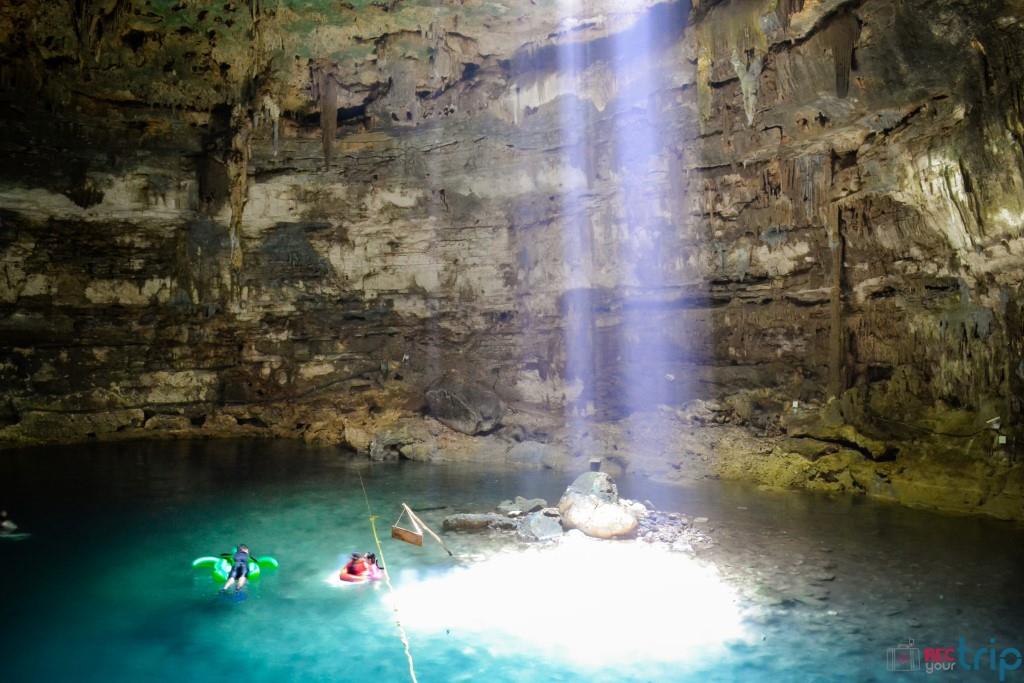 The first thing you’ve got to do once you enter a cenote in Mexico is basically jump into the water! No wonder, uh?! I bet my suggestion doesn’t come as a surprise given the unbearable Mexican heat.

And what if you can’t swim…

What if you are afraid of deep water and not being able to see the sea bottom?

Or what if you want to snorkel a bit but you’ve forgotten the mask?

Do not worry! At the entrance of a cenote there is always the possibility of hiring all you need or want (from the snorkeling mask to the life jacket). If you don’t wish to hire a life jacket, you could always make good use of the ropes that have been placed on the sides of the rocks which will enable you to immerse yourself in water despite your debatable swimming abilities. Did you know that in caverns such as the Dzitnup one, there are even lifeguards!?

Extra activities in a cenote

The demand of guided scuba diving inside a cenotes has sharply risen over the past few years. Some of them are allowed even  without a proper license, but for the more challenging ones, being provided with a proper scuba diving certification has become compulsory. I do think this would be an interesting extra activity to be engaged in. Unfortunately, I didn’t have the chance to explore a cenotes’s sea bottom.

Dzitnup cenotes in the Yucatan peninsula in Mexico

One of the things that must be mentioned when talking about Mayan caverns are the cenotes in Dzitnup.

When we talk about this world-wide famous place, we are actually referring to two caves. Dzitnup is a small town situated close to the Samula and X’queuén cenotes. I have to admit that I found it quite hard to get to the correct spot, but thanks to a kind Mexican lady that lived in the nearby village, I eventually reached my destination.

The Dzitnup cenotes are just at a few kilometres distance from Valladolid (about 7km) in the direction of Chichén Itza (oneof the best 5 mayan ruins to see). I’d recommend visiting them together with the Mayan archeological site as I’ve already mentioned in my previous post: a two-weeks itinerary in Mexico.

The two cenotes are actually far away from one another.

How to visit these cenotes

The tickets must be bought at the entrance of the whole site. You can’t get it wrong: it’s right where the vast parking space is. Do not forget to give the “propina” to the parking attendant! You don’t know what a propina is? Don’t worry…I’m sure you’ll have the chance to discover the meaning of this word whilst travelling, but if you want to get to know a bit of Spanish and be given important advice before setting of, make sure you read my post on how to travel safely in Mexico.

In any case, if you were still wondering what the word propina means, it’s just “tip”. It’s a good habit to give a little spare change to the parking attendant and then buy two tickets that will allow you to enter the marvellous Dzitnup caverns.

Just near by the ticket office, you’ll find the toilets and a small bar where to buy water or some food, if needed.

Pay attention: at the entrance you’ll probably see a group of youngsters with some parrots that will approach you to snap a photo together. Needless to mention, they’ll ask you to pay for that photo. My personal advice is to keep going your way, without having them bothering you too much.

As soon as you get in, on the left you’ll find the route to get to the X’quequén cenote, whilst on the right, the path to reach the Samula cenote. 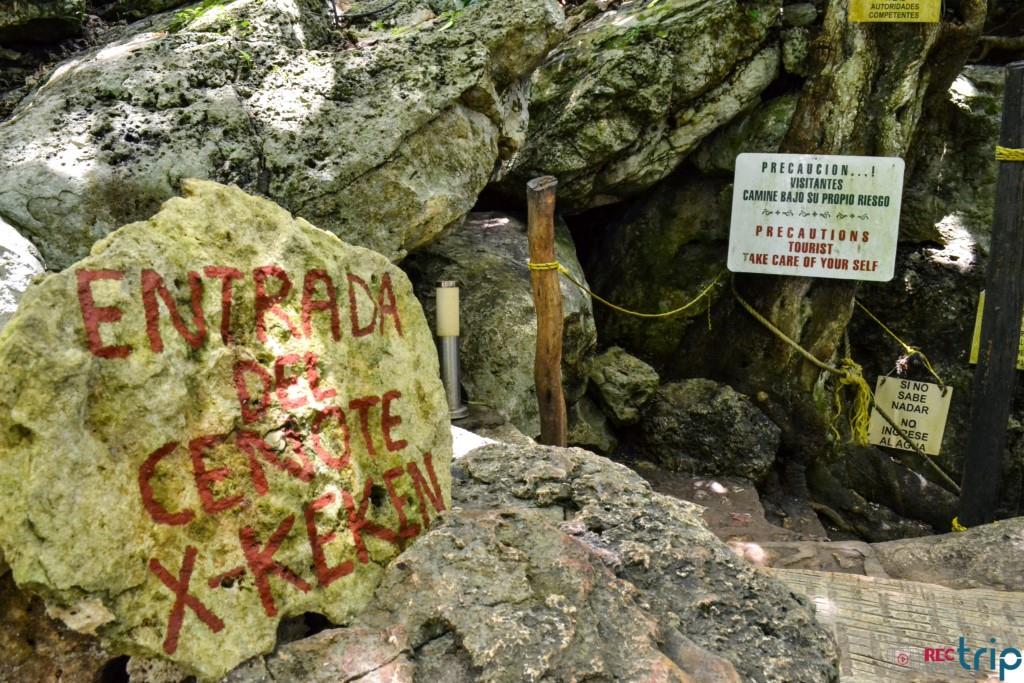 Amongst the two routes, the most particular is undoubtedly the X’quequén one as it’s packed with calcium formations. The Samula cenotes, on the other hand, it’s preferable for a good swim in clean and fresh water.

When to visit them

Without a shadow of a doubt, I’d say around midday. This is because at this time the sun is high up in the sky and the light gets through the small cracks of the rock “ceiling” creating a suggestive beam of light.

Other interesting cenotes in Mexico in the Yucatan peninsula

Besides the aforementioned cenotes, there are hundreds of other caverns that are well worth a visit.

Amongst them there are:

How to plan a trip on your own from A to Z?