Home SPAIN Las Fallas in Valencia: one of the Most Beautiful Festivals in Spain

Firecrackers, fireworks, hundreds of giant wooden and papier-mache monuments all over the city. Where are we?! Right, of course! We cannot but be in Valencia, attending the highly anticipated event that makes it famous all over the world: “Las Fallas”.

The festival of Las Fallas in Valencia, UNESCO Intangible Cultural Heritage since 2016, takes place in the capital of the Valencian Community every year from 15 to 19 March.

The origin of Las Fallas

It is a festival of ancient origins which combines pagan and Christian tradition. On the one hand it celebrates the arrival of spring, on the other hand San Josè (better known in Italy as San Giuseppe), patron saint of carpenters and woodworkers. Towards the end of the 19th century, it was the carpenters who gave life to a series of rituals that later evolved into today’s tradition of “Las Fallas”.

Around mid-March, in front of their workshops, in the streets or in the squares, old tools, rags, junk and wood chips, now unused, were burned. Among these, there were also small wooden structures called “parots”. Carpenters and woodworkers used them to support the oil lamps that lit the environment during winter nights.

After this brief explanation, you should not be surprised if I told you that the etymology of the word “Fallas” comes from the Latin facula, or “torch“.

The term “fallas” is also used to indicate the spectacular wood, papier-mache or cardboard sculptures that artists, or Falleros, build in every district of the city and its surroundings. The sizes of these works of art are impressive, think that some of them can even be 30 meters high! Smaller in size, but no less beautiful, are the Ninots, smaller fallas dedicated to children.

What do these sculptures represent?

In most cases, the characters that make up las Fallas are parodies of political or contemporary personalities, portrayed in a satirical manner or in the guise of the Disney characters. 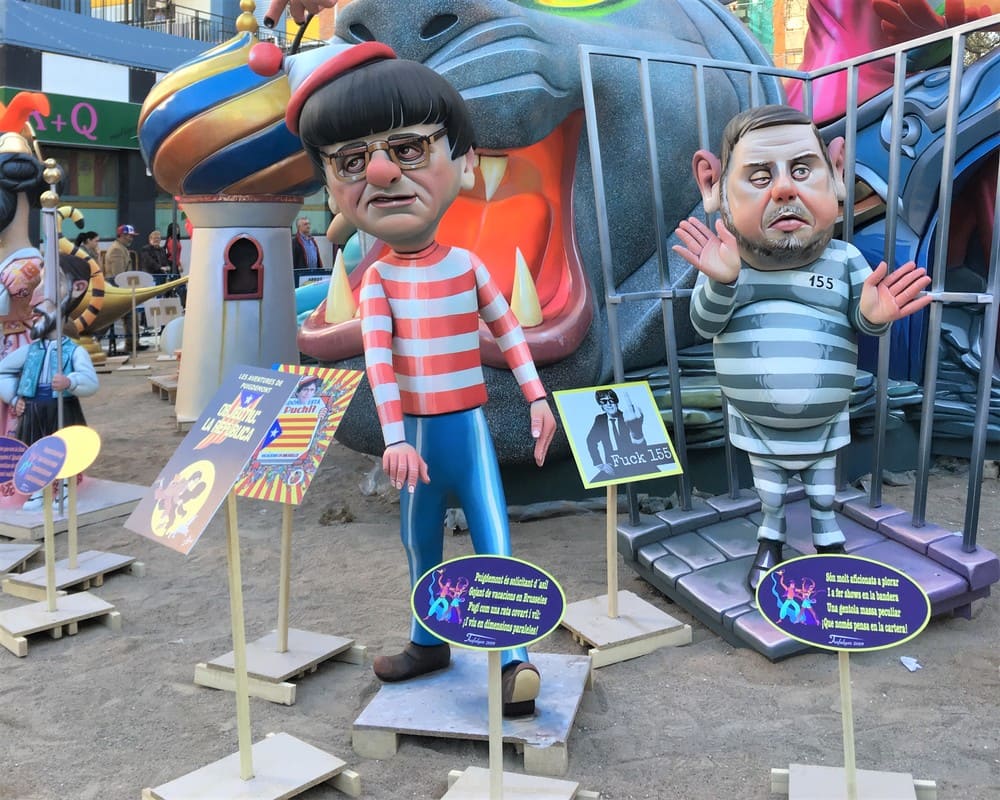 On 2019 the spotlight was on Carles Puidgemont, former leader of the Catalan Independence Party, who was targeted in all the Fallas around the city.

The beginning of the Las Fallas festival

March 15th is the starting date of the Las Fallas festival. The artists still have a few hours to spend on their sculptures, which must be absolutely completed by midnight in order to be displayed to the public in all their splendour from the following day.

The fantastic Las Fallas is kicked off by the Fallera Mayor, the queen of the party, with the famous statement: “Senyor pirótecnic pot començar la mascletà“. Awarded by a special commission among several Falleras, the Fallera Mayor remains “in charge” for one year, until the following edition of Las Fallas. Just consider that the Fallera Mayor dress can cost more than 30,000 €…

The Fallera Mayor is also the last to parade in front of the Virgin in the “Ofrenda a La Virgen“. La ofrenda, is a floral tribute to the Our Lady of the Forsaken (Virgen de los Desamparados in Spanish) which begins on the evening of March 17th and continues non-stop until March 18th.

Las Falleras and the Falleros of Valencia and neighbouring villages parade, as if on a pilgrimage, through the centre of the city arrive at the Plaza de la Virgen carrying a bouquet of flowers, usually carnations. This is the perfect moment to take a closer look at the beautiful dresses at Falleras. Accompanied by a music band and the Falleros, they parade through Calle de la Paz, Calle San Vicente to reach the Plaza de la Virgen.

In the middle of the Plaza de la Virgen, a couple of days prior, there is a wooden structure in the shape of a pyramid that summits with the face of the Old Lady and the Child. The flowers (red, white or pink) are embedded in the wooden structure until they completely cover it and create the Virgin’s cape, creating designs and shapes that change every year.

A Valencian told me that this is the most exciting moment of all Las Fallas.

With the folk music played by the band, the audience in adoration, the arrival at the Plaza de la Virgen and the sight of the Old Lady covered in flowers. It is not uncommon to see Falleras and Falleros (but also Valencians themselves or tourists around the square) get emotional before this show.

Tip: once the Ofrenda is over, get as close to the Old Lady as possible and enjoy the scent of the thousands of carnations that form her cape.

March 19, the most exciting day of the year

On the last day of the “Las Fallas” festival, March 19th – St. Joseph’s Day – all the wood carvings, including the Ninots (or Fallas Menores) and the huge Fallas Mayores, are then burned on the famous “de la Cremà” night.

At 10pm, the Ninots are set on fire, followed at midnight by the Fallas Mayores. The last monument Fallas that gets burned is the one in the Plaza del Ayuntamiento. It is a pity that these works of art, created by hundreds of people who have worked on them for about a year, are destroyed just like that and vanish into smoke and ashes in a few minutes.

Actually, there are only two fallas that are “spared” by this terrible end. A Falla Menor and a Falla Mayor are in fact proclaimed winners by a special commission that values and votes on them during the festive week. Both are therefore spared. Afterwards, they are transferred to the Fallero Museum which is located a short distance from the wonderful Ciudad de las Artes y Ciencias.

A few lines ago, I brought up Mascletà. Do you wonder what it is?!

Mascletà is a deafening sound show (it can reach 120 decibels!) created by the explosion of thousands of powerful firecrackers that takes place every day, from March 1th to 19th at 2pm in the impressive Piazza dell’Ayuntamiento.

The show lasts about ten minutes and draws lots of tourists, but also Valencians themselves. The luckiest (and wealthy) enjoy a view directly over the square, because they stay in the surrounding hotels or use the office where they work to invite friends and relatives to see the Mascletà from a more privileged position. All the others, however, as early as two hours before the show begins, stream into the square with cans of beer, chips and pipas to pass the time.

How does the Mascletà take place?

At 1:50 pm sharp, a very powerful firecracker is launched into the air, followed by another at 1:55 pm. Then, people stand up, start whistling, shouting, taking their mobile phones to take pictures and videos: the show is about to begin!

It’s really difficult to put into words what it feels like when you witness a Mascletà (let alone participate in all 5 Mascletà during the week of Las Fallas). The “shots” of the firecrackers gradually increase the rhythm until the final “earthquake”. In the air there is a grey smoke that darkens the sun, plus a terrible noise and the smell of gunpowder that, at times, becomes almost unbreathable.

A little tip: if you are uncomfortable with loud noises, stand near the fountain in the square. If you are more daring, go near the Town Hall building and… well, good luck with your eardrums!

The Mascletà ends with a last single firecracker blast, followed by the shouts and applause of the public who, slowly, leave the square and flood into the bars of the city to eat, but above all to enjoy one (or more) delicious fresh cervecita. 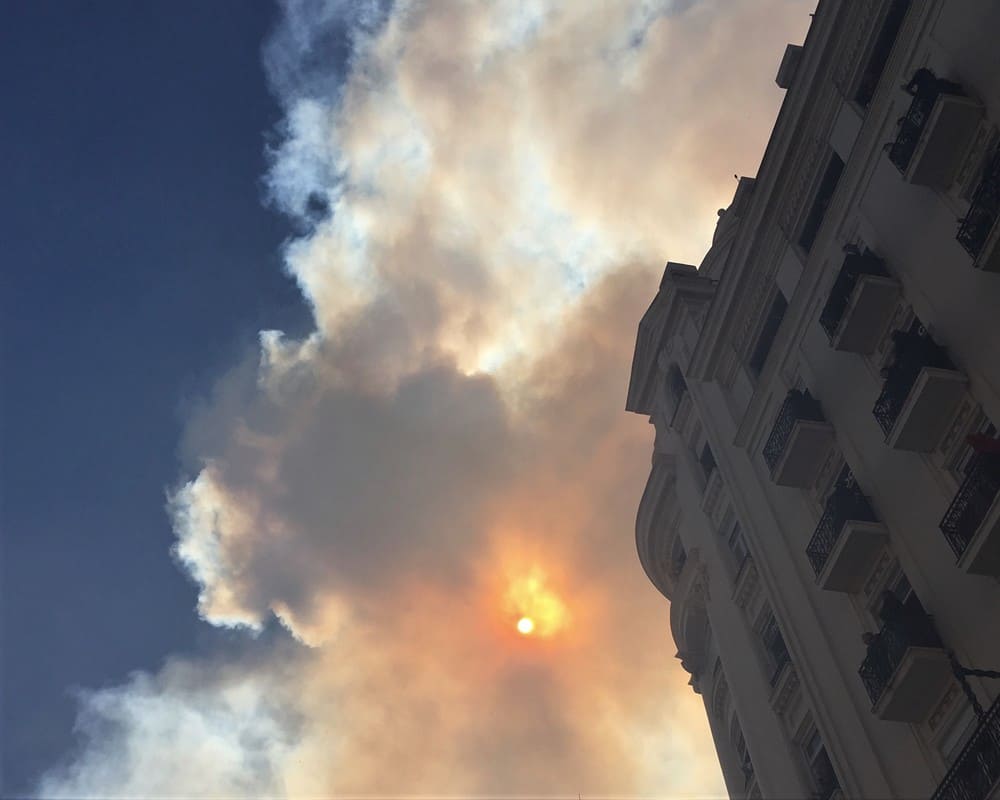 Las Fallas: celebrations in the evening

The nightly fireworks shows are different from the Mascletà. This explains why the Mascletà is purely a daytime show that makes noise, while at night the city lights up some of the most beautiful fireworks I have ever seen.

The most emblematic fireworks show, without a doubt, is that of the night of March 18th (or morning of the 19th, since it begins at 1:30 a.m.). It is the Nit del Foc which marks the beginning of the last day of the Las Fallas festival.

Personally I had the chance to meet two Valencian guys who kindly invited me to see the Nit del Foc from the terrace of their house. I was not far from the Puente de Aragón, where the fireworks are shot from. While I was staring at the amount of explosives ready to amaze the hundreds of tourists gathered around Paseo del Alameda, my new friends explained to me that this year (2019) the show would be directed by Ricardo Caballer, one of the most famous Spanish pyrotechnicians in the world.

Once again, guys, it is difficult to put into words what I witnessed. I just have to tell you that for the show, digitally operated and controlled through 12 computers, they used over 3000 kg of explosives. In addition to the explosives, there was a 60-metre high crane with a 48-metre horizontal boom. They fired fireworks at 360° degrees, 30 different visual effects, 3 minutes of final “earthquake”, for a total of about 22 minutes of the show.

Beware: the locations of fireworks shows that take place at night vary. The first night I saw a fireworks display in the Plaza del Ayuntamiento. On the second and third night, the fireworks were fired in the Alameda area.

Once the fireworks show was over, the las fellas festival did not end, on the contrary. All the Valencians and tourists stay in the streets of the city and have fun listening to reggaeton and, as always, enjoying a cervecita in the many verbenas found in every barrio of Valencia.

Are you wondering what verbenas are? They are simply “discos” that are set up in the streets of the city. A small stage, a deejay or a band, and let the dancing begin! There really is something for all musical tastes!

Practical tips to enjoy Las Fallas to the fullest

Las Fallas is one of the most popular events not only in the whole of Spain, but also internationally. Imagine how many people come to Valencia from March 15th to 19th…

So book your accommodation (hotel, AirBnb or hostel) and your tickets (train or plane) way in advance. Needless to say, prices skyrocket. For this special occasion, those who have a free room or bed available at home, they make it available for tourists. The hostel or bed only are the two least expensive options.

I spent the night at The River Hostel (click here). Clean, relatively cheap, but above all in a very central location (Plaza del Ayuntamiento is just 7 minutes walk away!). If, instead, you prefer to take a look at everything in the city,i camminata!).