Home ITALY The Pyramids of Zone on Lake Iseo in Italy

The Pyramids of Zone a Brescia are a true spectacle of nature. Thanks to their characteristics, they give visitors one of the most interesting sceneries of the entire Lake Iseo surroundings. (Read also -> 15 Best things to do on Lake Iseo).

Therefore, they are the ideal destination both for organizing simple excursions that allow you to unplug and to enjoy a unique natural setting. But…what are the Pyramids of Zone and why are they called that?

Pyramids of Zone: the geological origin

The geological formation of the Pyramids of Zone dates back to the last glaciation, when the entire territory of the Camonica Valley was covered by the glacier, which penetrated as far as the Bagnadore Valley, creating a “side glacier.”

The moment the ice began to retreat, a moraine began to be created due to the large deposit of debris. They, impeding the flow of streams, caused the formation of a lake.

However, the streams continued to drag the debris, which filled the body of water, resulting in the formation of a plateau, the place where Cislano and Zone stand today. Over the millennia, erosion of the ancient moraine occurred, which, little by little, became the current Pyramids of Zone. 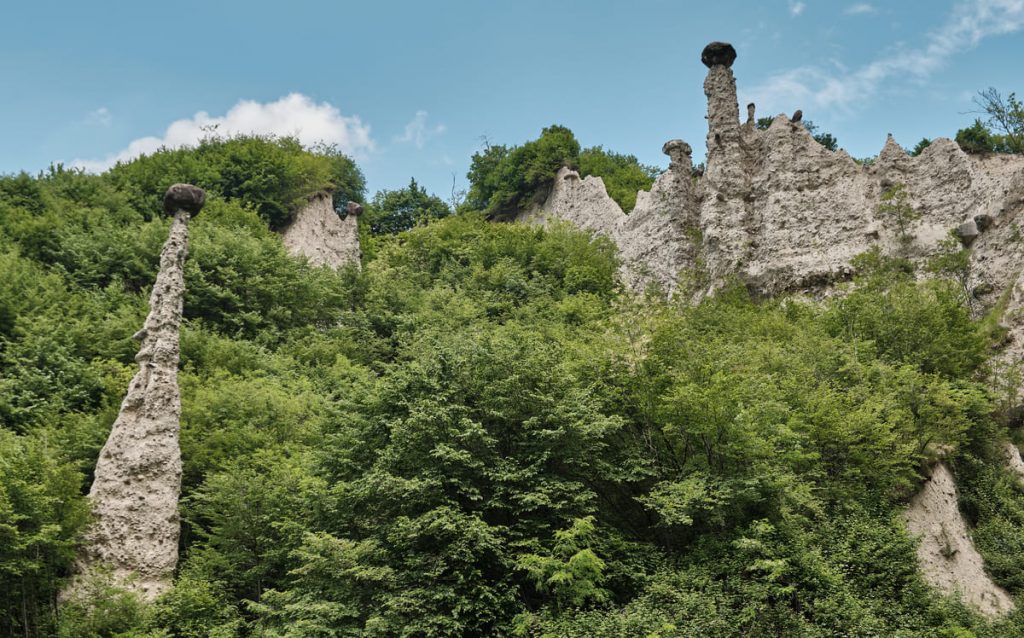 The Pyramids of Zone reserve

The Pyramids of Zone is a reserve opened in 1984 and covers a rather large area: 21 hectares and an elevation ranging from 400 to 600 meters slms.

It is certainly one of the most fascinating settings in the entire territory of the Lake Iseo. Zone, it is rich in walks and trekking among beech, chestnut and fir trees, not to mention that it is one of the starting points of the paths that lead to visit Mount Guglielmo, a mountain well known and loved by all Brescians.

How did the Pyramids form?

Basically, the formation of the pyramids occurred thanks to weathering. Through their action, they gave rise to columns up to 30 meters high on the top of which are large and characteristic boulders of rock. When one of the “rock caps” collapses, the pyramid crumbles until it encounters another rock boulder at a lower level.

Discovering the Pyramids of Zone

Access is free and the pyramids can be seen throughout the year. Despite this, the recommendation is not to go during periods of snow and rain, as these make the path dangerous.

How to get to the Pyramids?

To reach the Pyramids of Zone you can:

Before entering the reserve, park your car in the designated parking lots (there are two), one of which has a bar and kiosk open during the summer months.

Routes near the Pyramids of Zone

Inside the reserve, it is possible to walk to a circular trail of medium difficulty, 2.5 kilometers long, with an elevation of 600 meters and an elevation gain of 160 meters.

The start is located on Via Sebino in Cislano. Along the trail it is possible to read explanatory signs that provide information about both the area and the natural phenomenon that gave rise to the Pyramids of Zone. The trail has a great advantage: being circular, it makes it easy to return to the starting point, and the possibility of getting lost is zero.

Those who prefer a less “complicated” route can choose the path of about one kilometer that starts just behind the small church of St. George. Here, too, signs can be found telling about the geological origin of the boulders. The time required for this alternative path is about one hour.

Why visit the Pyramids of Zone?

The Pyramids of Zone reserve is a destination to include within the list of excursions to do in Lombardy. It is an uncrowded place where you can spend hours enjoying nature and relaxation.

These rock sculptures are also known as the fairies’ chimneys and can even be noticed from the road. If you go there during a summer night, you can witness the wonderful spectacle of the Earth Pyramids illuminated by colorful beacons. 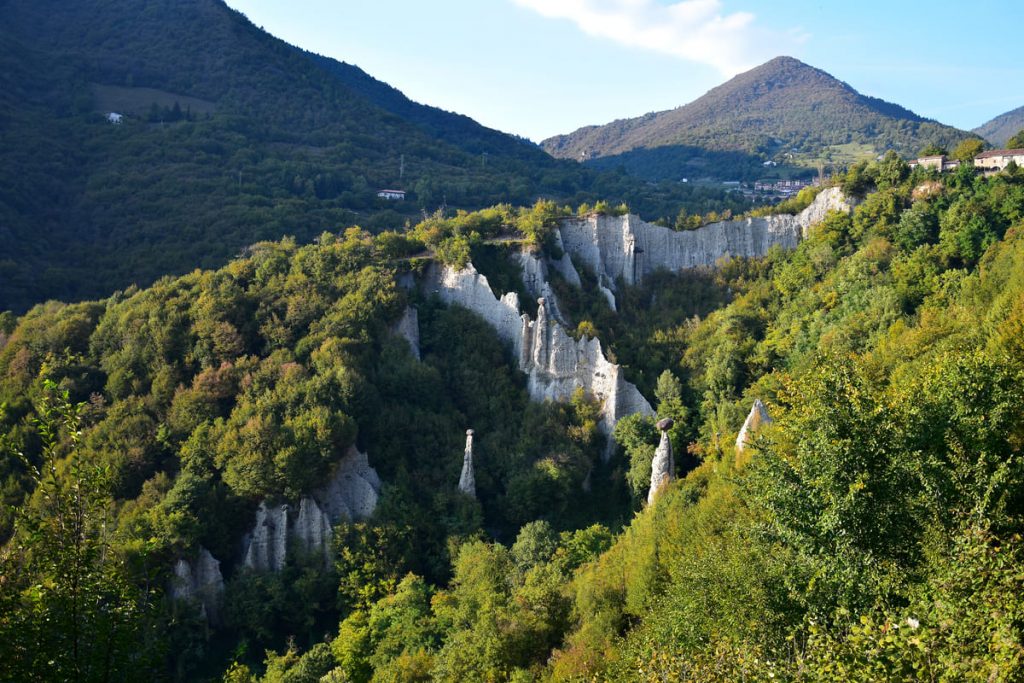 Surrounding the Pyramids of Zone: What to See

Since the “trip” to the Pyramids of Zone may turn out to be relatively short, why not appreciate all that you can find in the surrounding area. Know that the Lake Iseo area is really really rich in experiences to be had and incredible places to discover.

Here is a brief summary of what you can find around the Pyramids of Zone.

The Enchanted Forest of the Gnomes

Once you have finished your walk in the Pyramids of Zone reserve, you can end the hike on a high note by heading to The Enchanted Forest of the Gnomes.

This is a path located a few meters outside the town of Zone embellished with wooden sculptures depicting, precisely, gnomes made by Luigi Zatti, in art The Red, a local artist. This enchanted place is able to amaze young and old alike.

A visit to Monte Isola

It is nothing more than an island located in the middle of the d’Iseo. I often go to Montisola in the warm season and I assure you that it is a place that will remain in your heart. It is only passable/visitable on foot, by public transportation or by bicycle.

It is one of the most beautiful villages (borghi) in Italy and is the largest inhabited lake island in all of Europe. I would say these connotations are enough for you to include it in your Lake Iseo itinerary. If you want more information, you can read on my article -> Montisola on Lake Iseo.