Home FRANCE The Best Things to do in Bordeaux in France

If you’re looking for the best things to do in Bordeaux, you’re in the right place because I described an itinerary really interesting.

Bordeaux, in southwest France, is certainly not one of those destinations you put first on your wish list. It’s obvious, first the capital cities, then the renowned cultural cities, and then everything else.

Bordeaux is in all this “rest,” as are other cities such as Porto in Portugal, but, there is always a but, it is not true that these cities are to be relegated to gregariousness. On the contrary, they are precisely those cities that amaze and from which one returns with a big smirk.

I liked it very much. Bordeaux is clean and orderly, with an elegant historic center as well as entirely a UNESCO heritage site. To be more precise, Bordeaux is the first such vast urban perimeter inscribed on the list of UNESCO sites.

The city can be visited in a single day, it is perfect associated with a visit to the Dune of Pilat or a 3/4 day itinerary in its surroundings which I will tell you about in other posts shortly.

Where to stay in Bordeaux?

Before I tell you the things to do in Bordeaux I want to open a very short parenthesis on where to stay.

My advice is to find accommodation along the streetcar lines that intersect in the city center. The two main lines are the A (red) and the B (purple) that both pass in front of the Cathedral. Alternatively, you might consider finding it on the C (lilac) streetcar line that runs along the riverfront.

Here is a small screenshot to give you a sense of what the lines are in Bordeaux. 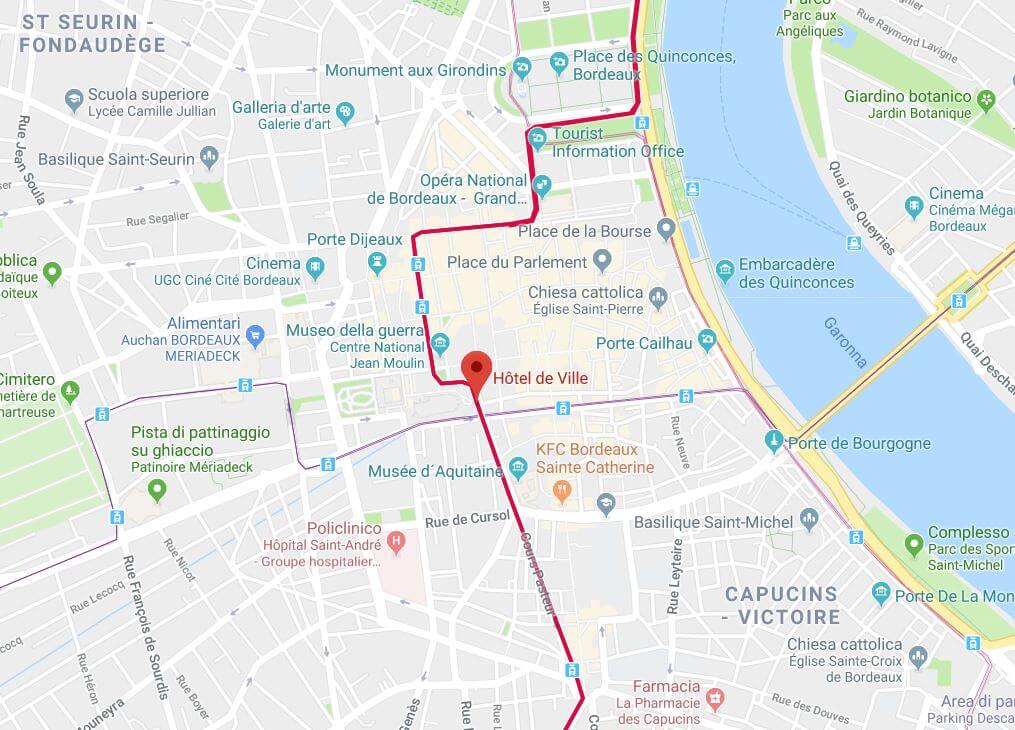 I slept at the Bordeaux Cosy B&B (click to view hotel) b line, 5-10 minutes by streetcar and I was in the city center. A beautiful B&B with a breakfast with lots of choice.

Best Things to do in Bordeaux: walking itinerary

This time, rather than a list of things to do in Bordeaux, I want to recommend a walking itinerary to visit all the main sights in the city. When it comes to visiting a city in one day, you need to optimize your travels, if you follow this itinerary you will be able to appreciate Bordeaux even while seeing a slightly lesser known place.

Before I tell you about the first stop, I recommend you consider the Bordeaux City Pass. The duration can be 24/48/72 hours, and gives you access to several attractions included in the price, as well as unlimited public transportation as well.

The price, in my opinion, saves a lot if you start from the assumption that entry to the Cité du Vin (Bordeaux’s wine museum) costs 20 euros, whereas with the Bordeaux City Pass it is included. Alternatively, you can discover all the tours to discover the city, many among others free and with free cancellation.

If you just want to visit the Cité du Vin -> purchase your ticket here.

1° Step to Visit Bordeaux: the Saint-André Cathedral of and the Tour Pey Berland

As I wrote to you at the beginning of this article. Near the Bordeaux Cathedral, the A and B streetcar lines intersect (stop Hôtel de Ville), so I could not begin this walking itinerary to visit Bordeaux except from its beautiful cathedral.

Like most cathedrals, this is an imposing building. Definitely well inserted into the urban context, it does not, however, overlook a large square. Romanesque in style, it was built before the end of the 11th century; in 1998 it was inscribed on the UNESCO World Heritage List as it was associated with monuments touched by the French Camino de Santiago de Compostela.

You should know, and walking around the city will prove it, that in Bordeaux passes the via Turonensis, one of the 4 pilgrimage routes to Santiago that converge and join at Ostabat.

Here, put it this way, just in case you are thinking of doing the Pilgrim’s Way to Santiago and want to add a few kilometers to the French route (since they are already a few right?), starting from Bordeaux could be a solution.

Going back to the Cathedral, I was not able to visit the Gothic tower Tour Pey Berland but I think it is one of the things to do in Bordeaux that is absolutely not to be missed. Seeing the city from above always has a certain effect.

Admission is free and the Cathedral is open at different times depending on the day, find the times here -> official website of the cathedral

2° Step to Visit Bordeaux: from the Cathedral to the Grand Theater of Bordeaux

Right in front of the main entrance to the Cathedral, a small street named Rue Vital Charles, you will have to walk down it following a bit what is the route of the tramway.

The only special feature of this street is that, along its entire length, if you turn around you will be able to see the entrance to the cathedral and its spires.

After a few hundred meters you can turn into Cours de l’Intendance. This much wider street is full of stores and pastry stores, including some that offer classic French Macarons and typical Bordeaux sweets made with vanilla and rum called Canelés. To tell you the truth, there is a risk of mistaking the pastry shops for jewelry stores, given the cost of the Canelés…I’ll leave it to you to find out how much they cost; I was disappointed. I did, however, taste one and liked it very much.

At the end of the street you will find the imposing Grand Theater of Bordeaux, one of the oldest wooden theaters in Europe. During the day you can only sense how imposing it is; at night, illuminated, it takes on a great charm.

Okay, I admit that among the things to do in Bordeaux there is one that is quite far from the center: I am talking about the“Cité du Vin,” Bordeaux’s interactive wine museum.

To get there you will have to take the streetcar B towards “La Garonne” and get off at the “La Cité du Vin” stop of the same name.

The beautiful building, which seems to be formed entirely of mirrors, is located north of the city center, overlooking the Garonne River.

I recommend that you spend no more than two hours inside the museum, otherwise you will lose time visiting the rest of the city.

If you are a wine connoisseur, or simply want to learn more about wine, this is the place for you. Through more or less interactive steps, aided by an audio-guide included in the price, you can find out a lot about wine and wine cultures around the world.

Since I like wine quite a bit, the museum left me pleasantly impressed. In addition, also included in the ticket price, you have the opportunity to taste a wine on the top floor of the structure. A glass of wine with a view of Bordeaux.

I think La Cité du Vin is one of the must-visit stops of the things to do in Bordeaux.

Do you want to visit the Cité du Vin? CLICK HERE for the ticket.

Perhaps it’s not the best part of life to go a long way after having a glass of wine, but, trust me, this stop will take you to an area of Bordeaux that is little visited and, from my point of view, not very touristy.

Leaving the Cité du Vin, continue on foot in a southerly direction, arriving near the Pont Jacques Chaban Delmas, cross it and take you to the other bank of the Garonne.

Here you will find a more stark but still quaint Bordeaux. Walking along the roadside of via Quai des Queyries, after a few hundred meters on your left you will find the former military barracks. Today the area (nearly 20000 square meters) is called Hangar Darwin.

This is a very nice redeveloped area. You will find sheds with murals, unconventional places, the largest organic restaurant in France and even a couple of covered skate parks.

A place I highly recommend to include in your walking itinerary for Bordeaux.

3° Step to Visit Bordeaux: From Darwin Park to the Porte du Borgogne and Porte Cailhau

Since you will have covered a lot of ground in the previous stage, why not repeat it? It is time to move on to other sights to see in Bordeaux. The river view walk will be very pleasant. You will have to continue on the same route as before, that is, via Quai des Queyries and arrive at the Pont de Pierre, and then cross it.

6° Step to Visit Bordeaux: to the beautiful Place de la Bourse and the Miroir d’Eau

Past Place du Palais you can take Rues de Argentiers and after a hundred meters you will be in front of another important church to see in Bordeaux: Église Saint-Pierre

This will be the last stop before reaching one of the most photographed spots in Bordeaux. I am talking about the legendary Place de la Bourse that opens directly onto the Garonne. Crossing the street, in front of the square you will find Le Miroir d’Eau. If you find it filled with water and pass by at sunset, you will be able to enjoy a beautiful play of reflections.

As I mentioned, if you visit Bordeaux, you should not limit yourself to the city but to the surrounding area.

1 – At the first position among the suggested excursions is to visit the Dune of Pilat, the largest dune in Europe, I will explain more about how to get there in a dedicated post. Know that whatever description in words or whatever photograph of the dune you see, none can really do it credit. The only way is to “climb it” and admire the expanse of sand stretching toward the ocean on one side and toward the forest on the other. Stunning.

2 – In second place I would put Saint-Emilion, a village that is part of the Unesco heritage, although I admit that it did not excite me all that much. It is a nice village, but nothing more.

The road to get there, however, is worth it because it passes alongside countless vineyards. Miles and miles of vines. In the summertime it must be beautiful. I visited it in late winter and perhaps that is also why it did not impress me as much.

3 – Finally, in third position, if you have time to make a couple of hundred kilometers, you could push on to beautiful La Rochelle. This is a quiet seaside town where it is pleasant to walk through its narrow streets.

Not least, it is also famous for Île de Ré, the island that you can reach via a bridge for a fee (8 euros round trip). At the end of the large Île de Ré is a lighthouse on the ocean. We actually made an itinerary starting as a first stop from La Rochelle in a itinerary in Aquitaine.

Nice, France: Best Things To Do and See!

Around Paris: Itinerary to the English Channel

From Paris to Mont Saint Michel: Tours, Cars and Trains

Pilat Dune in France: the Highest in Europe