Home SPAIN Best Things To Do In Toledo: a Day-trip from Madrid

Are you in Madrid in Spain and you want to get out of the hustle and bustle of a metropolis and dive into Spanish history? Well, going to see Toledo is just what it takes. It’s all about Spanish history because Toledo used to be the Spanish capital before Madrid.

Where to stay in Toledo and some tips

It is only a short distance between Madrid and Toledo. A few kilometers by train and you can arrive in this beautiful city. I think it’s about 70km but I don’t want to be wrong, in any case you can make a day trip from the Spanish capital.

However, if you want to spend the night in Toledo here is a list of hotels where you can stay, Toledo is beautiful so a night in the city is great.

Thing to do in in Toledo, Spain

It is not easy to summarize what to do in Toledo, in fact visiting Toledo means experiencing centuries and centuries of history. Every street in Toledo has a story to tell for which the street has been named. Miguel, the guide with whom I visited Toledo, even told me about a small street that was named after the bells, precisely because in the past thieves tried to steal the bells and one fell on that street. I was astonished by this answer, and yet Toledo is just this: a blend of centuries and centuries.

So, if you are on the way to Madrid or you are based in the capital, I absolutely recommend that you take a day trip to Toledo, it will surprise you and I think it is absolutely one of the most beautiful and fascinating Spanish cities to visit.

To reach the city you can easily take the train from Madrid and in less than an hour you will get to Toledo.

Tip: I feel like giving you a great tip straight away. In order to avoid going home with sore feet it is better to wear comfy shoes. Toledo is a constant up and down and is full of cobblestones, so wearing flip-flops is not a great idea.

The main part of the town is not far from Puerta de Alcantara, the entrance door. In a few minutes walk you can reach Plaza Zocodover which is the main square.

This square, whose name comes from the market of the beast, was once the scene of the Inquisitions. Not far from the square on one side we have the Alcazar and always a few steps walk you reach the Cathedral.

It almost seems that it takes little time to see Toledo. Actually it doesn’t. The thing is that Toledo looks small, but among all these inner hills of the street there is a lot of it and the various places where there are synagogues or other attractions are scattered throughout the city.

The first impact with Toledo has to be the panoramic tour so you can see how the city was built and above all you can understand its history.

Toledo, the things to do: Plaza Zocodover and the Alcazar

To see Toledo peacefully, I recommend that you take the tourist bus, those that have the upper part open and allow you to take pictures. You can also take it directly at the station, unfortunately I can not tell you the price but know that it is worth it.

The city is almost completely surrounded by the river Tajo, which was good and bad for the city. This was a city that was enough to besiege to be conquered. On the other hand, in the position it was in, there was no way it could be resupplied. As you’ll see on the scenic tour, it didn’t suffer much damage except for the Alcazar. It was a bit more vulnerable.

Toledo, the things to do: the Cathedral

Like any reputable visit, among the things to see in Toledo you cannot miss the Cathedral, and the Cathedral of Toledo is the beauty of your visit. It is one of the most famous and important Gothic cathedrals in all of Spain. Entrance fee is charged. As soon as you enter you will notice that the aisles are 5 instead of the classic 3 there are many works by artists such as Goya, El greco, Titian, Raphael. If you want more historical information you can click HERE.

I would like to try to tell you something more particular.

If you have the chance, buy a ticket to visit the bell tower. An attendant will accompany you to the top crossing several places. Here you’ll can take many panoramic photos, you will also see a good part of the Alcazar.

The steps that will take you to the top of the bell tower are winding and rather narrow but allow you to reach a magical place.

At the top of the bell tower of Toledo you will find not only the normal bells but also the Gorda Bell so called because it is huge. 14 tons that have only rang once in their entire history. Yes, you should know that this bell has a deep crack that has been created in what I like to call its baptismal bell. It hasn’t rung since.

Special aspects of the Cathedral of Toledo

Another interesting feature is the painting that covers an entire wall near the exit of the Cathedral of Toledo. It is said that quickly entering the cathedral and making a sign of the cross in front of the Saint’s painting was a way to atone for one’s sins. Let’s say it was intended as a short version of a confession. So much so that the painting was done in part at the entrance/exit so that the gesture could be a rather quick thing.

Another interesting thing to see in Toledo are the hats inside the cathedral. Here you can catch a glimpse of several red hats hanging. They are exactly above the tombs of the bishops, they are left in that position to be ready when they come back to life. 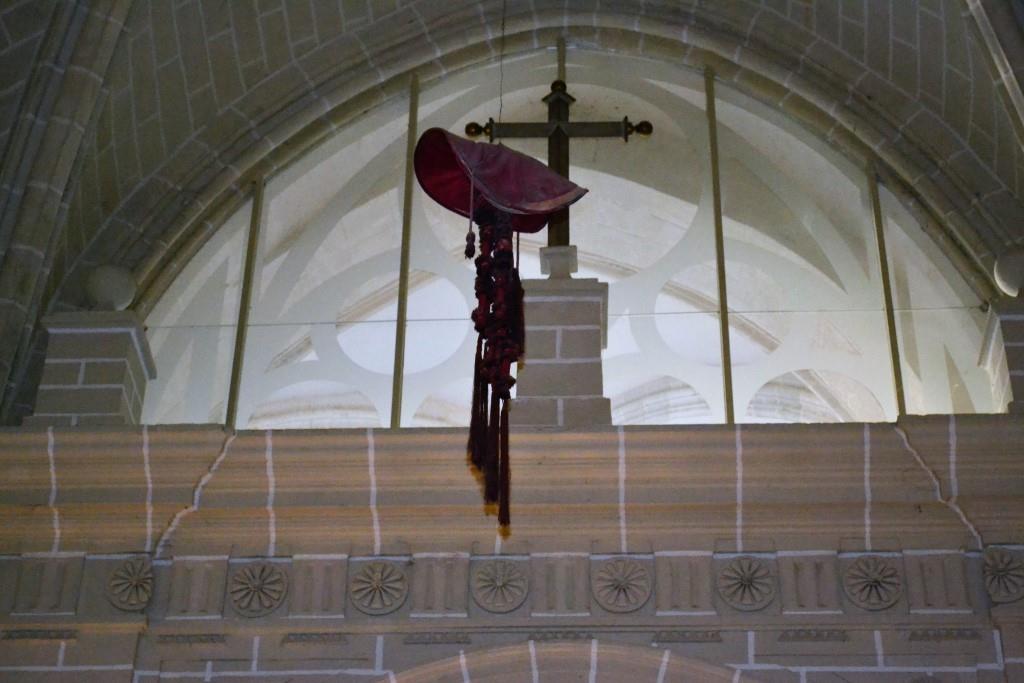 Toledo, the things to do: the Jewish Quarter

Among the main places of interest in Toledo is definitely the Jewish Quarter. Toledo is a city where there is a strong integration of many cultures. It is so now but it has been so over the centuries. Even after the Christian reconquest these cultures continued to influence the history of the city and even today there are still signs of Muslim and Jewish civilization. 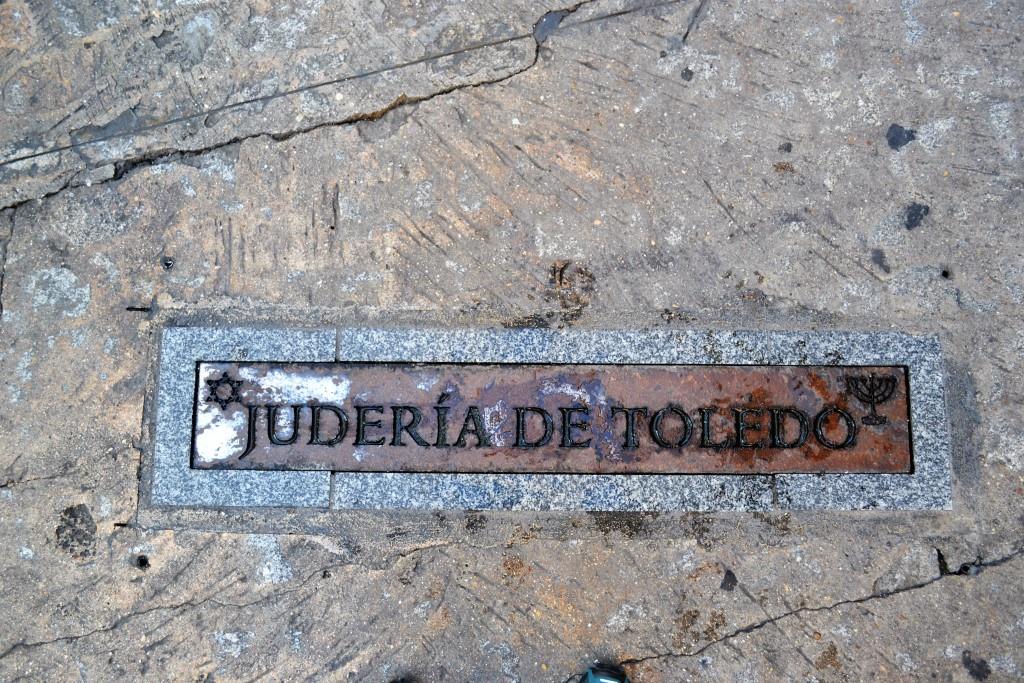 The former Jewish ghetto houses important synagogues such as the Old Synagogue of Santa Maria la Blanca and the Synagogue of Trànsito with the Sephardic Museum. In the Jewish quarter you can also find the Iglesia de Santo Tomè. It is famous for the painting that represents the “Burial of the Count of Orgaz” which in Spanish is “L’entierro del Conte Orgaz”.

Toledo, the things to do: Cristo de la Luz Mosque

If you visit Toledo you cannot miss this gem. It is a very small mosque that our guide has defined as a paradise for archaeologists. Here you can find all the cultures on top of each other, literally. It is not known why this mosque was built over a Roman consular road, yet the road underneath it is clearly visible. 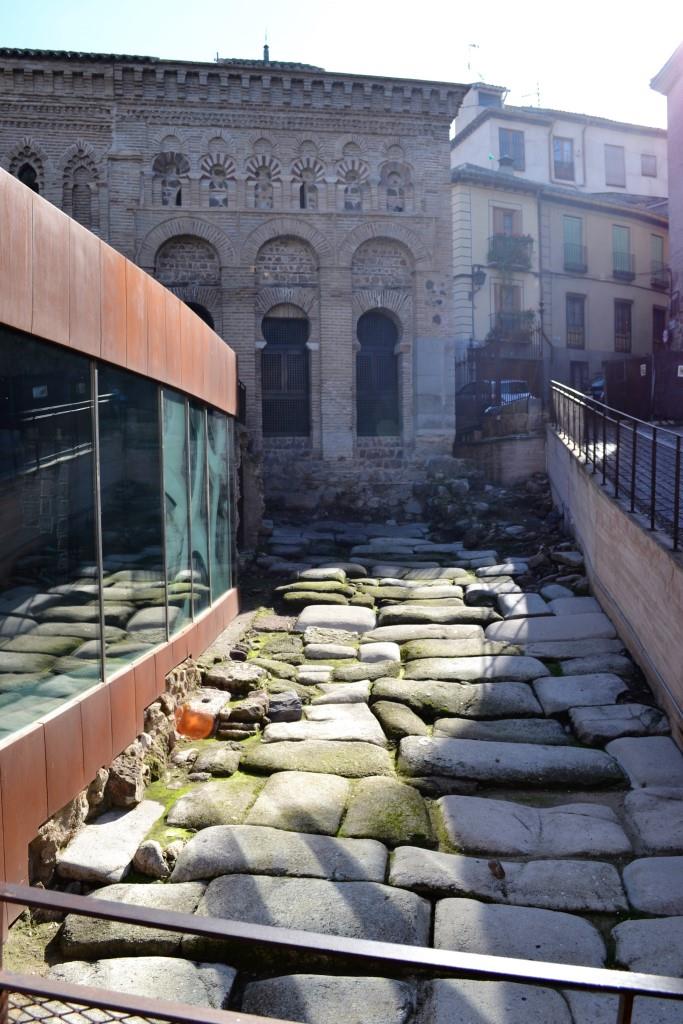 Unfortunately, it remains impossible to understand where the road led because it would be unthinkable to dig under the whole city. The fact is that it is still an unsolved mystery. Speaking of mysteries, it is impossible not to mention the legend that is bound to this Mosque.

Legend has it that on entering the city on the day of the Christian reconquest, Alfonso VI’s horse stopped right near the Mosque where there was a strong light inside. The interior is an interweaving of Christian frescoes and obviously Arab decorations.

However, your visit to Toledo should not stop here, missing all the entertainment, culinary, crafts. So, do not miss the next post about the 4 experiences to do absolutely in Toledo.